The two leaders met ahead of a looming UN Security Council deadline to renew a massive cross-border aid operation that Russia is intent on shutting down. 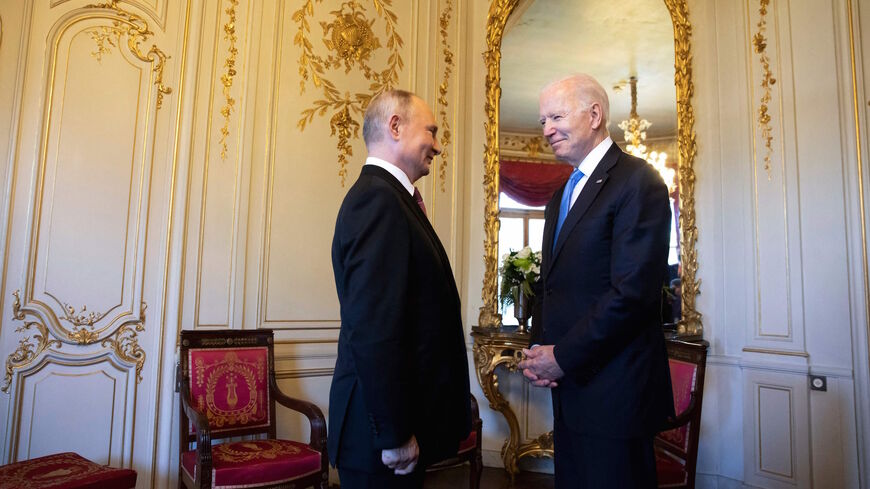 US President Joe Biden (R) talks to Russian President Vladimir Putin prior to the US-Russia summit at the Villa La Grange, in Geneva on June 16, 2021. - PETER KLAUNZER/AFP via Getty Images

Humanitarian assistance to Syria was among the issues President Joe Biden said he discussed with Russian President Vladimir Putin during their highly anticipated summit on Wednesday, as pressure builds on Moscow to greenlight a cross-border aid operation described as a lifeline for millions of Syrians.

The two leaders addressed “the urgent need to preserve and reopen the humanitarian corridors in Syria,” Biden said during a press conference in Geneva that followed his first face-to-face meeting with his Russian counterpart since taking office.

A UN Security Council resolution that keeps humanitarian aid flowing from Turkey to the northwestern Syrian province of Idlib is set to expire on July 10. Relief agencies have warned that a failure to renew the UN’s cross-border aid operation would jeopardize food assistance for more than 1 million people and limit what COVID-19 supplies and life-saving medicine reach war-ravaged Idlib.

The United States is calling on the 15-member council, in particular Russia, to vote to reauthorize the Bab al-Hawa crossing on the Turkish border and renew two other shuttered access points that supplied the rebel-held northwest and Kurdish-controlled northeast before Russian obstruction forced them to close last year.

Moscow has argued the UN cross-border aid mechanism violates Syria’s sovereignty, and its diplomats have signaled they will use Russia’s veto powers to block the resolution’s renewal.

The Russian government, whose military intervention in 2015 helped turn the tide of the civil war in the regime’s favor, has argued that humanitarian assistance should instead be channeled through Damascus.

But aid groups fear aid could be withheld from Idlib given the regime’s long history of weaponizing “cross-line” aid that’s supposed to reach rebel-held parts of Syria. After more than a decade of war, Idlib province is the country’s last opposition stronghold and is largely controlled by Hayat Tahrir al-Sham, a US-designated terrorist group.

Some analysts have speculated that Russia will try to use cross-border aid as a bargaining chip for sanctions relief or reconstruction support for the regime, a nonstarter for Washington, which firmly opposes normalizing the government of President Bashar al-Assad in the absence of the political solution to the conflict. In a sign that Syria factored high on Russia’s agenda for Wednesday’s bilateral summit, the country's Syria envoy, Alexander Lavrentyev, was among the small group of Russian officials in attendance.

Biden didn’t elaborate on whether any deal was reached with Putin, only that the importance of getting food to starving Syrians was discussed.

The United Nations says there is no alternative to its system of aid deliveries. At least 75% of Idlib’s population depends on humanitarian assistance to survive, most of which comes from the 1,000 trucks that cross monthly into northwest Syria through the Bab al-Hawa crossing, the UN says.

Non-UN agencies warn they lack the resources to fill the aid gap if the UN’s World Food Program, which supplies 1.4 million Syrians with food assistance each month, loses access to the Turkish delivery route. Earlier this month, a group of 42 aid agencies estimated they could meet the needs of just 300,000 people if the UN’s mandate expires, leaving more than 1 million Syrians without the food aid they depend on to survive.