As Russia wages war in Ukraine, concerns are mounting that Moscow will use its UN Security Council veto powers to dismantle what remains of cross-border aid operations into Syria. 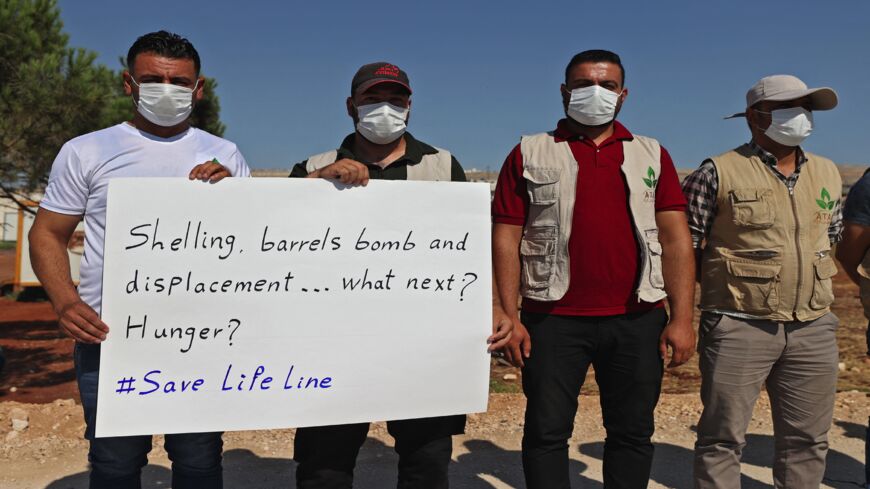 A human chain is formed by workers from the civil society, humanitarian aid, and medical and rescue services in a vigil calling for maintaining a UN resolution authorizing the passage of humanitarian aid into Syria's rebel-held northwestern province of Idlib through the Bab al-Hawa border crossing with Turkey, near Bab al-Hawa along the motorway linking it to the city of Idlib, on July 2, 2021. - OMAR HAJ KADOUR/AFP via Getty Images

The war in Ukraine could have devastating humanitarian consequences for Syria, where relief workers fear a vengeful Russia could make good on threats to eliminate the country’s last remaining aid lifeline.

The United Nations Security Council has until July to reauthorize a cross-border mechanism that provides desperately needed food, medicine and other basic goods to millions of Syrian civilians each month. The UN resolution permits humanitarian assistance to be routed through neighboring countries rather than Damascus, which has a long history of blocking “cross-line” aid destined for areas under rebel control.

Along with China, Russia has used its veto threat in the 15-member council to weaken the UN’s original aid deal, which in 2014 set up four border crossings — two in Turkey, one in Jordan and one in Iraq.

Today, Bab al-Hawa on the Syrian-Turkish border is the only remaining crossing point through which the UN and its implementing partners can send supplies into Syria. That arrangement will end in July unless the Security Council votes for renewal.

“We want to present Russia with as stark a choice as possible,” a senior Biden administration official told Al-Monitor, warning that if the Russians kill the cross-border mandate, “that could reinforce the degree of isolation they are experiencing.”

Even before Russia’s invasion, donor governments and aid workers were concerned that Moscow would seek to shutter the aid passageway. But the escalating war in Ukraine and the potential for President Vladimir Putin to lash out in Syria has suddenly raised the stakes.

The concern was shared by foreign envoys who gathered in Washington earlier this month to coordinate their response to the crisis in Syria, which this week will mark 11 years since the start of its uprising.

“Uncertainty over the impact of the Ukraine crisis was definitely felt,” a European diplomat said of the March 3 meeting.

“Everybody was already like, ‘What is it going to take this year to get Russia not to veto [the resolution]?’ That concern is even more present after the invasion of Ukraine,” said another European diplomat.

American and European officials are quietly exploring alternatives to the UN’s humanitarian response in Syria but are reluctant to discuss those efforts publicly, fearing doing so would send a message to Russia that cross-border assistance is no longer needed.

“Every government does contingency planning,” the administration official said.

The UN doesn’t just procure and deliver aid but also coordinates the work of nongovernmental organizations on the ground. It would be virtually impossible for those aid groups to replicate the UN’s cross-border operations on the same scale, and many are set to lose funding if the resolution isn’t reauthorized.

Relief agencies prepare for the worst every year by stockpiling supplies inside Syria and bracing for budget cuts. But Russia’s invasion of Ukraine has injected a sense of urgency into this year’s contingency planning, said Jomana Qaddour, a senior fellow at the Atlantic Council and co-founder of the aid organization Syria Relief & Development.

“Donor governments have more appetite to consider a plan B,” said Qaddour. “They’re willing to consider more options and take a bolder approach with Russia.”

The end of cross-border assistance would be catastrophic for the more than 4 million people living in northwest Syria, some three-quarters of whom rely on humanitarian aid to keep from going hungry. More than 80% of the rebel-held region is considered food insecure, and the disruption of wheat imports from Russia and Ukraine is expected to further drive up food prices.

Ending cross-border assistance would likely send another wave of refugees toward Turkey’s sealed southern border where hundreds of thousands fled after the last Russian-backed government offensive on Idlib, which ended in a cease-fire brokered by Turkey and Russia in March 2020. A Turkish official said Ankara is concerned that Moscow could not only force an aid shutdown but also strike back militarily in Idlib if Putin feels cornered in Ukraine.

“Since Russia has used refugees in Idlib as a card to make life difficult for Turkey in the past, it is always possible for Russians to settle the score there,” the official said.

After months of negotiations, an 11th-hour deal brokered by the United States and Russia in July 2021 kept the aid passage open for another year. A summit held in Geneva between President Joe Biden and Putin helped pave the way for the resolution's renewal, which the Biden administration touted as proof that the rival powers could work together on a common humanitarian cause.

But the crisis in Ukraine has brought ties between the United States and Russia to historic lows, raising serious doubts over whether the two countries could even hold a constructive dialogue on Syria.

“Assuming that we’re essentially in a state of kind of indirect war as we are in Ukraine, then I struggle to find a reason for why the Russians wouldn’t veto the cross-border resolution,” said Charles Lister, director of Syria and Countering Terrorism and Extremism programs at the Middle East Institute.

“They would see that as a quite suitable retaliation against US interests in that part of the Middle East,” he said.