The rules of engagement were followed in the lead-up to a strike that killed 10 people, including children, the top general says. 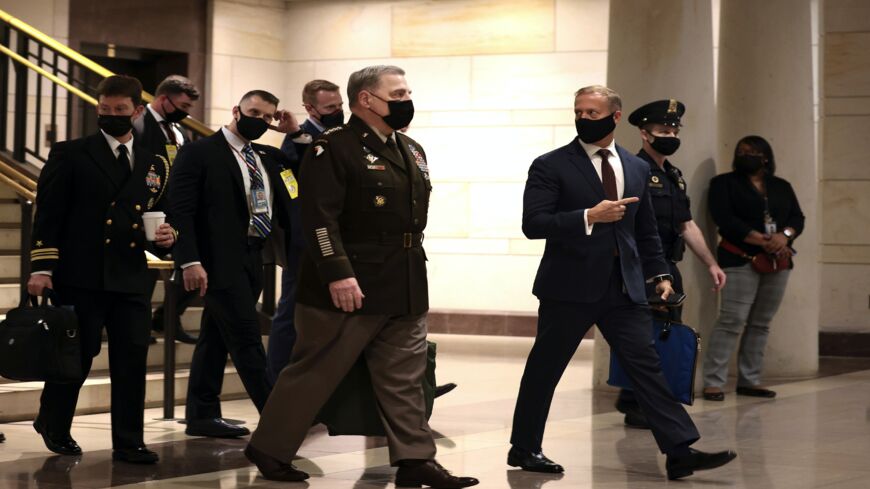 Chairman of the Joint Chiefs of Staff Gen. Mark Milley (C) arrives at the US Capitol to brief members of the House of Representatives on the situation in Afghanistan on Aug. 24, 2021, in Washington, DC. -

The top US general on Wednesday said the military followed proper procedure in conducting a drone strike that killed as many as 10 people in Afghanistan’s capital last Sunday.

The strike targeted what US Central Command said at the time were “multiple suicide bombers” in a car near Kabul International Airport where US and NATO troops were guarding chaotic evacuations from Taliban rule.

Chairman of the Joint Chiefs of Staff Gen. Mark Milley said Wednesday one person killed in the strike was linked to the Islamic State. Milley did not name the person killed and offered few further details.

The incident remains under investigation following press reports that several members of the same family, including at least three children, were killed.

“At the time, and I think it’s still valid, we had very good intelligence that ISIS-K was preparing a specific type of vehicle at a specific type of location. We monitored that through various means,” Milley told reporters at the Pentagon.

“All of the engagement criteria were being met. We went through the same level of rigor that we’ve done for years,” he said, adding, “Because there were secondary explosions, there’s a reasonable conclusion to be made that there were explosives in that vehicle.”

“We know from a variety of other means that at least one of those people was an ISIS facilitator,” Milley said.

Family members of those killed have told reporters one of the men killed in the blast was a former contractor with the US military; the other was an aid worker with an American charity group. Those claims have not been independently verified by Al-Monitor.

The chairman acknowledged a CENTCOM investigation is ongoing but said “all procedures” were followed in the lead-up to the precision bombing. “We think it was a righteous strike,” he said.

The incident came three days after a suspected Islamic State suicide bomber detonated among dense crowds outside the airport’s Abbey gate, killing more than a hundred Afghans and 13 US troops.

Earlier in the week, US officials had publicly warned of “specific” and “credible” threats to the airport by the Islamic State’s Khorasan Province, known as ISKP or ISIS-K. The top US commander of forces in the Middle East, Gen. Kenneth “Frank” McKenzie, later said suicide car bombs were among the top “imminent” threats.

The bombing and subsequent drone strike marked a violent end to two decades of Washington’s failed effort to pacify Afghanistan through force.

Both Milley and Defense Secretary Lloyd Austin struck an unusually somber chord at the Pentagon on Wednesday, ruing the loss of life, limb and peace of mind throughout the 20-year war.

“We’re going to learn from this experience, as a military,” Milley said.

“How we got to this moment in Afghanistan will be analyzed and studied for years to come. And we in the military will approach this with humility, transparency and candor.”

The two also lauded the more nearly 6,000 US troops who risked, and in 13 cases lost, their lives in order to uphold the administration’s last-minute evacuation effort from the beleaguered airport.

In total, 124,334 people were evacuated from Kabul throughout the effort, the top general said. Most of them were Afghans.

Some 20,000 evacuees are awaiting further processing at bases in five countries in the Middle East. Another 23,000 remain at bases in Europe, according to Milley.

Defense Secretary Austin revealed today that he will travel to the Gulf next week to thank Washington’s allies for hosting evacuees at local bases.

It is unclear precisely how many US citizens remain in Afghanistan, though Secretary of State Antony Blinken said yesterday it is less than 200.

Administration officials say the State Department continues to coordinate on further evacuations through diplomatic channels, including talks with Turkey and Qatar to restore flight operations at Kabul’s airport.

The majority of roughly 20,000 Afghans who worked with the United States over the last two decades and applied for visas were left behind, a senior State Department official told reporters today.