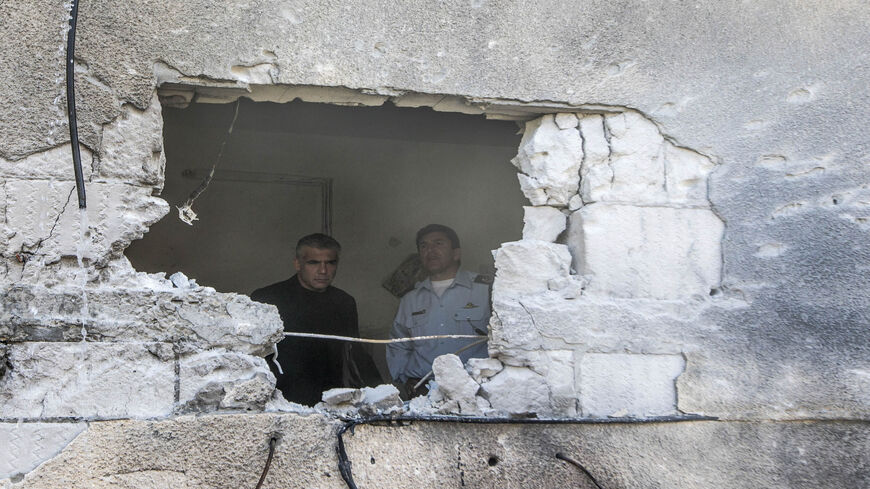 Israeli Finance Minister Yair Lapid (L) inspects the damage inside a house following a rocket attack by militants from the Gaza Strip on the southern town of Sderot, Israel, July 21, 2014. - Jack Guez/AFP via Getty Images

Israeli Foreign Minister Yair Lapid presented Sept. 12 his vision for a long-term settlement between Israel and the Gaza Strip. Addressing a conference of the International Institute for Counter-Terrorism at Reichman University, Lapid proposed an outline for the reconstruction of the Gaza Strip. Lapid said that the plan — dubbed "economy for security" — presents a more realistic approach toward the reconstruction of Gaza in exchange for disarmament of Palestinian armed factions.

Lambasting the policy adopted by former Prime Minister Benjamin Netanyahu vis-a-vis Gaza, Lapid noted, "Since Israel left the Gaza Strip in 2005, we have been dragged into round after round of violence causing suffering for our people and harming our economy. The policy Israel has pursued up until now hasn't substantially changed the situation. The closures haven’t stopped the smuggling and production of weapons. Last night we once again struck Gaza after yet another rocket was fired, and residents ran to their shelters. We need to change direction. What should we do? The short answer is that we need to start a large, multi-year process of economy for security. It is the more realistic version of what in the past was called 'rehabilitation for demilitarization.'"

Lapid explained that his outline includes two stages. The first stage will address the immediate humanitarian crisis in Gaza, tackling basic human needs there. "The electricity system will be repaired, gas will be connected, a water desalination plant will be built, significant improvements to the health-care system and a rebuilding of housing and transport infrastructure will take place. In exchange, Hamas will commit to long-term quiet," Lapid said.

The second stage of the outline includes a comprehensive economic jump-start for the Gaza Strip. Lapid proposed that "as part of the second stage the artificial island project off the coast of Gaza will be advanced, which will allow for the construction of a port. A transportation link between the Gaza Strip and the West Bank will be built. International investment inside Gaza and joint economic projects with Israel, Egypt and the Palestinian Authority [PA] will be advanced. Industrial and employment zones will be built near the Erez border crossing."

In his address, Lapid made clear that Israel does not intend to negotiate with Hamas, which calls for its destruction. Rather, Israel expects international involvement and engagement, to pressure Hamas into opting for the solution he is putting on the table. It also strives for the residents of Gaza to pressure Hamas in favor of such a plan. Israel, he said, hopes Gazans now understand what they are missing out on as a result of terrorism and that they realize how much they stand to gain if terrorism stops.

Lapid noted that the investments needed for the implementation of the outline, especially for the second stage, will be managed by a group of donor countries and international entities. The group should include the United States, European Union, International Monetary Fund, World Bank and several Gulf states, led by the United Arab Emirates. Lapid continued, "As part of the second stage, the PA will become the central body working to advance these different projects, it will be given the economic and civil management of the Gaza Strip.”

This last statement on the PA, as well as Lapid’s affirmation that such a plan has never before been presented officially by an Israeli government, leaves little room for misinterpretation. Lapid intends to carry the banner of Gaza reconstruction, as well as the banner of advancing on talks with the Palestinians. Two tracks that should surely earn him the support of the White House. Indeed, Lapid noted in his speech that he had held in recent weeks a series of conversations with partners in the Arab world and the West about his plan. These partners included, he said, leaders in Egypt and the Gulf, US Secretary of State Antony Blinken, Russian Foreign Minister Sergey Lavrov and the  EU.