According to the Foreign Ministry in Jerusalem, 33 countries boycotted the Durban IV conference today in New York over concerns about anti-Semitism and because the platform would be exploited to attack Israel. 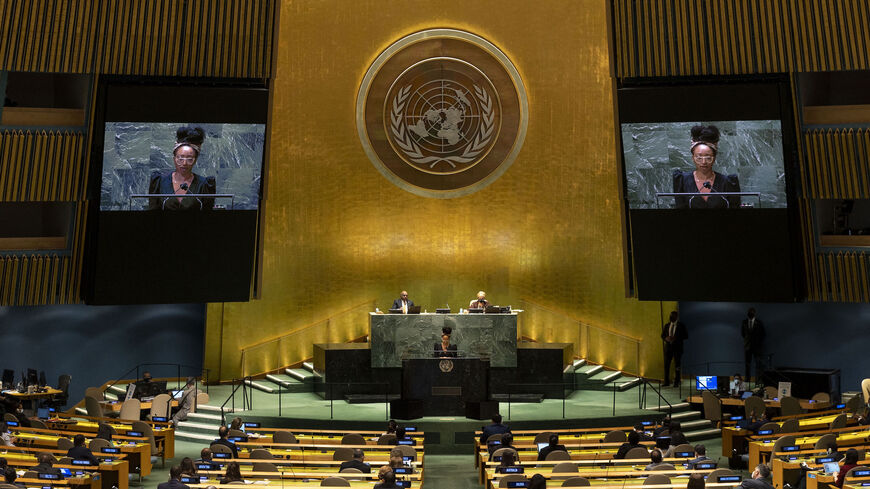 Catherine Labiran, the founder of The Praxis Project, addresses a high-level meeting to commemorate the 20th anniversary of the adoption of the Durban Declaration being held during the UN General Assembly 76th session General Debate at the United Nations Headquarters on Sept. 22, 2021, in New York. - JUSTIN LANE/POOL/AFP via Getty Images

Lapid was referring to the Durban IV conference being held today in New York on the margins of the United Nation’s annual General Assembly. The conference marked the 20th anniversary of the Durban Declaration, which was adopted at the 2001 World Conference Against Racism.

As mentioned by Lapid, several countries boycotted the Sept. 22 Durban IV event over concerns about anti-Semitism and the platform being exploited to attack Israel. The 33 states boycotting included Israel, the United States, France, Canada, Australia, the United Kingdom, Austria, the Czech Republic, Germany, Hungary, the Netherlands, Moldova, Greece, New Zealand, Poland, Romania and others. This was over double the number of countries that have done so in the past for Durban conferences. For instance, in 2011, 15 countries skipped the Durban III conference.

Germany had confirmed already last July that it would not attend this year’s Durban conference. For France, it was the third time to boycott a Durban Declaration follow-up event. Prior to the event, the office of French President Emmanuel Macron issued a statement saying, "Concerned by a history of anti-Semitic remarks made at the UN conference on racism, known as the Durban conference, the President of the Republic has decided that France will not participate in the follow-up conference to be held this year."

The first 2001 Durban conference in South Africa was marked by deep divisions on issues of anti-Semitism, xenophobia, colonialism and slavery. Nongovernmental organizations that participated in the conference accused Israel of ethnic cleansing, arguing Israel was an apartheid state and Zionism was racism. At the time, the United States and Israel left the conference, protesting its tone.

In 2009, then-Iranian President Mahmoud Ahmadinejad addressed the Durban II conference, calling Israel a “cruel and repressive racist regime.” “Following World War II, [Western powers] resorted to making an entire nation homeless on the pretext of Jewish suffering. They sent migrants from Europe, the United States and other parts of the world in order to establish a totally racist government in the occupied Palestine,” argued Ahmadinejad. His words prompt a rare walkout of dozens of diplomats who attended the Geneva event.

For 33 countries to boycott the current Durban Conference was evidently a victory for Israel’s diplomacy. Lapid said as much on Sept. 20, posting an article about the Israeli diplomatic-offensive campaign. Next to the article, the foreign minister noted, "The Foreign Ministry at work: a focused and successful diplomatic campaign against the Durban anti-Semitism conference."

Speaking at a conference organized Sept. 20 by the AJC Jewish advocacy group, Israel’s Ambassador to the UN Gilad Erdan said the 2001 Durban Conference was originally put in place out of good intentions, but it was then hijacked by the Palestinians and other anti-Israel activists who turned it into an anti-Semitic platform. With this, the Durban Declaration politicized the global fight against racism, he said. "The Declaration intentionally references the Palestinians under the section of victims of racism," argued Erdan, who blamed anti-Israel activists of singling it out for alleged racism.

The AJC online conference was one of a series of events organized by Israel’s Foreign Ministry or in cooperation with the ministry against Durban IV. On Sept. 19, Erdan participated in an online Durban IV counter-conference organized by Touro Institute on Human Rights & the Holocaust director Anne Bayefsky and other human rights activists. The online conference called on the UN to fight racism, not Jews.