Iraqi protest groups, which have emerged since October 2019, are calling for wholesale reform of the Iraqi political system. 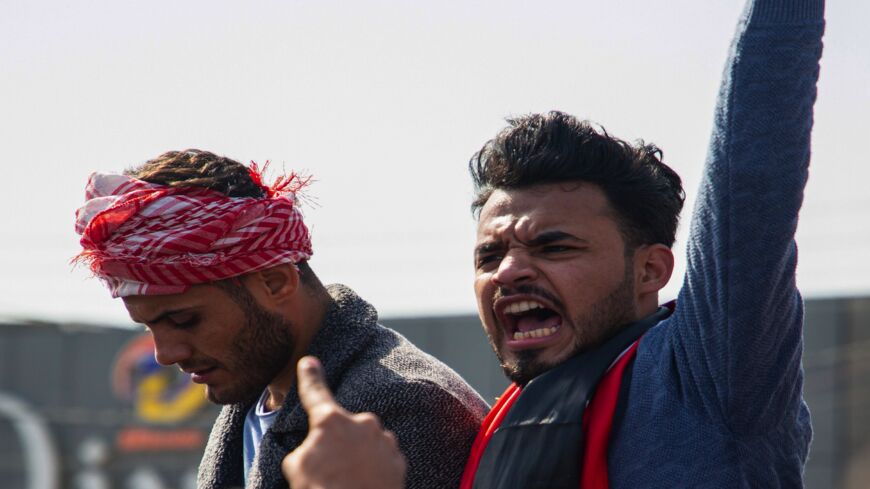 Iraqi demonstrators chant slogans during an anti-government demonstration by Basra University in the southern city of Basra, on Feb. 11, 2020. Mass rallies have rocked Baghdad and the mainly Shiite south since October, with protesters demanding snap elections and an independent prime minister as well as accountability for corruption and recent bloodshed. - HUSSEIN FALEH/AFP via Getty Images

Emerging Iraqi political movements declared their open opposition to the political system formed after 2003, calling instead for substantial reforms.

On Sept. 4, an expanded conference was held in the Iraqi capital, Baghdad, by a group of forces that reportedly emerged from the October 2019 protests.

The groups declared their opposition to the country’s political system and signaled they would not be participating in the election.

The conference, titled “The Opposition Forces Gathering,” tackled the “disadvantages” of the Iraqi political system.

It announced the boycott of the elections, saying “[the elections] lack integrity, fairness and equal opportunities.”

It also called for commemorating the start of the protests on the first of next month with a “million-man” demonstration.

Contrary to some protest forces and movements, this conference did not raise the slogan of “overthrowing the regime” or finding an alternative. Rather, it indicated the need for reforms, which is what most large and small political parties in Iraq are calling for.

In a statement on Aug. 26, Bassem al-Sheikh, a spokesman for the opposition forces, said, “The opposition is working to reform the regime, and it may take bigger steps than those that were taken in the 2019 protests.”

According to the spokesman for the forces, the opposition gathering includes 40 movements and groups of movements and gatherings that emanated from the protests witnessed in Iraq over the past two years.

Some of the forces that emerged from the October protests entered the political process and announced their participation in the early elections scheduled for Oct. 10. Others, however, announced their boycott of and opposition to the political regime, which created a state of dissent within the protests — deemed since their start as “unorganized.”

He added, “The opposition forces have gained political experience. Protest methods have been diversified, and this is where the United Nations, governments and international organizations that have real commitments toward post-2003 democracy in Iraq step in, as they support fledgling movements and protest actors who have democratic aspirations in order to put democracy in Iraq back on the right track.”

The Iraqi political blocs that formed this regime are afraid to raise the slogan “overthrowing the regime” and are pushing for “reforming and developing it.”

The National Wisdom Movement, led by Ammar al-Hakim, warned Aug. 13 of “the collapse of the political regime due to consociationalism and quotas.”

Talks about overthrowing the current political regime seem to be currently impossible. This regime, with its multiple parties and financial and military forces, constitutes a major impediment to those seeking to topple it from within, so opting for its opposition in a bid to reform it without overthrowing it seems realistic and feasible.

Chairman of the Iraqi Advisory Council Farhad Alaeddin told Al-Monitor, “The declaration of opposition to the political regime on the part of the October forces falls within their 2019 movement, as these forces tried to get involved in the political process and participate in the early elections. However, some of them opined that staying outside the current political process would be better than engaging in it, especially considering that they have come to fully realize the size of the hegemony, control and domination of the ruling political forces over the political process.”

He added, “This movement faces major internal challenges, as it lacks organization, a unified opinion, direction, and material resources amid a significant decline in the media and public support that they were receiving. The leaders of the October movement find there is a need to unify their ranks and reorganize their forces in line with the new and upcoming stage.”

Sulaimani said in a TV interview broadcast by the Iraqi Opposition Union YouTube channel on Sept. 4 that “the opposition is the only real project that Iraq now owns.”

A source told Al-Monitor, “There are parties that managed to coax some protest forces to work in a framework that does not pose a threat to the current political process, even if some of these forces were harsh on such parties in the media. Yet still, these forces are working in a way that does not destabilize the political regime.”

“These parties deliberately divided the protests’ forces to prevent the formation of a united front opposing the political regime,” the source added.

The opposition groups may find themselves on the outside looking in after the October 10 elections, especially considering there is international, including UN, recognition and wide support for the Iraqi government and its call for early elections.

United Nations Assistance Mission for Iraq (UNAMI) political adviser Muhammad al-Najjar said Aug. 31 that “his mission is seeking to bridge the gap between the political regime and the protesters.”