Erdogan's boasting about future defense projects with Moscow comes after he failed to get a meeting with President Joe Biden in New York. 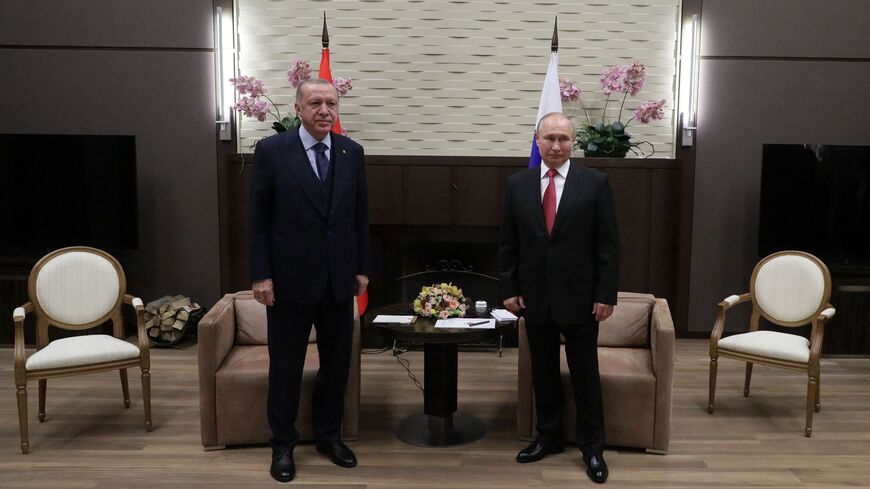 Despite Turkey’s membership in NATO and warnings from the Biden administration about further defense purchases from Moscow, Erdogan said he and Putin discussed moving forward on plans with Russia’s S-400 air defense system.

Turkey purchased the system from Moscow in 2017 and received the first unit two years later, plunging ties with Washington to an unprecedented low. US officials expelled Ankara from the F-35 Joint Strike Fighter program in response, saying the Russian air defense system threatened the security of the US-made aircraft.

Erdogan also touted the possibility of joint production of aircraft engines and unspecified cooperation on warplanes.

“Another issue is that we can take many steps together in shipbuilding. We will again take joint steps with Russia including submarines,” Erdogan told reporters aboard his plane during the return from Sochi.

Why it Matters: Erdogan is using his meeting with Putin to again publicly spurn Washington and the NATO alliance.

Caught in his own balancing act between Russia and the West while suffering real economic woes, Erdogan may well be posturing ahead of a planned meeting with President Biden on the sidelines of the G-20 summit in Rome next month.

Erdogan proved unable to score a meeting with President Biden on the sidelines of the UN General Assembly in New York, even as a senior Syrian Kurdish official visited Washington. Turkey’s government considers the US-backed Kurdish militias in Syria to be terrorists — a major sticking point between the allies.

Erdogan on Thursday expressed his dissatisfaction with the new American presidency, and said he discussed the Syrian Kurdish issue with Putin. Yet it was Syria's final rebel-held province of Idlib that was expected to be at the crux of the discussions.

As Metin Gurcan points out, the unusually brief time span of the two leaders’ meeting – just 2 hours and 45 minutes – seems to have left little time for such detail. Still, the closed-door nature of the discussion and absence of Turkey’s defense and foreign ministers from the meeting is raising questions.

There are also rumors of discontent among top Turkish military officials responsible for operations in Syria, as Putin pushes escalation against Syrian forces backed by Ankara in the Idlib redoubt.

What's Next: Biden and Erdogan are set to meet in Italy in the final days of October.

Know More: Anton Mardasov dissects the mystery and misinformation behind the talks, pointing to further developments in Idlib as a touchstone.