Palestinian factions in the Gaza Strip organized a series of protests to demand cancellation of the framework agreement signed between UNRWA and the US to resume US funding. 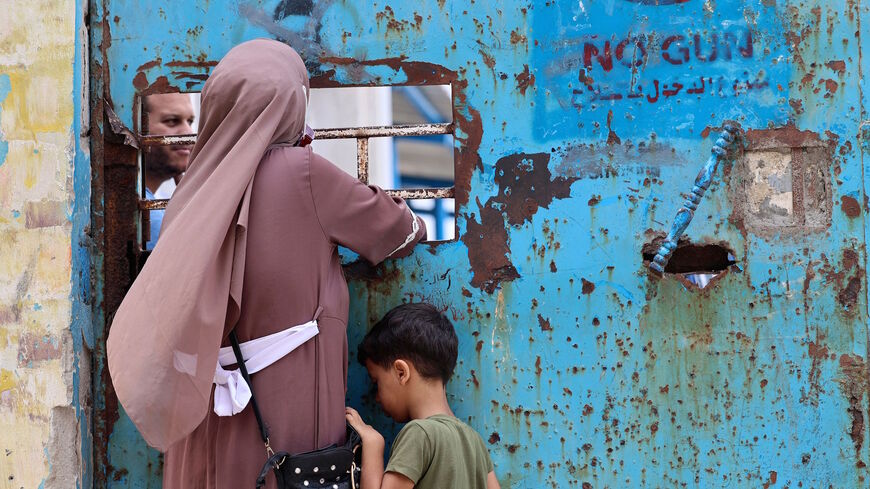 A Palestinian woman and her child stand next to a window of an aid distribution centre run by the United Nations Relief and Works Agency (UNRWA) in Gaza City, on Sept. 16, 2021. - MOHAMMED ABED/AFP via Getty Images

GAZA CITY, Gaza Strip — Palestinian factions in Gaza organized a conference on Sept. 14 to call for the revocation of the framework between the United States and the UN Relief and Works Agency for Palestine Refugees in the Near East (UNRWA).

The conference, which was organized in al-Shati refugee camp, west of Gaza City, was attended by hundreds of citizens. The Palestinian flag was raised while several banners stressed “the refugees’ rejection of the conditional funding of UNRWA and the rejection of the agreement.”

The Framework for Cooperation between the UNRWA and the US for 2021-2022 called for restoring US funding to the UN agency after it was cut off for several years under former US President Donald Trump.

The framework, signed in July, stipulates, “The US will not make any contributions to UNRWA except on the condition that UNRWA takes all feasible measures to ensure that no part of the US contribution is used to assist any refugee receiving military training as a member of the so-called Palestinian Liberation Army or any other guerrilla organization or has participated in any terrorist act.”

Under the framework, the US paid an additional $135 million to the agency.

Palestinian national and Islamic parties in the Gaza Strip led protests back on July 15 against the framework.

In April, the US government resumed its financing for UNRWA with $150 million. In May, the US also provided about $33 million in humanitarian assistance to UNRWA in response to the difficult humanitarian conditions that followed the military confrontation between the resistance factions in Gaza and Israel.

During his presidency (2017-2021), Trump gradually cut off the financial aid that had been earmarked for the Palestinians in the US budget for decades.

The US is the largest single contributor to UNRWA, paying about $300 million annually toward the $1.2 billion budget. The agency is the largest employer in the Gaza Strip, with about 13,000 workers in a community where half of the population is unemployed.

The Joint Refugee Committee, which includes the refugee committees of the Palestinian parties (including the Palestinian Liberation Organization factions, Hamas and the Islamic Jihad), explained in a statement on Sept. 16 that the cooperation framework “imposes unacceptable conditions for the funding to proceed. Chief among these is that it links its continuation to the so-called neutrality at the level of the work, staff, and Palestinian beneficiaries of UNRWA. The framework also rids the refugee issue of its political dimension, which is based on the right of return.”

The statement further added that “the framework gives donors, especially the US, the right to oversee UNRWA’s overall work, allowing its performance to be judged based on the US concept and not according to international law.”

Ahmed al-Mudallal, the official responsible for the refugee file in the Islamic Jihad, told Al-Monitor, “The cooperation framework is illegal because it does not go in line with the UN agreements that preserve the rights of the Palestinian people. It is just a bilateral agreement between the US and UNRWA that aims to fund the agency to act as a security arm for the US State Department and the Israeli Foreign Ministry to monitor the national affiliations of [UNRWA] employees and refugees [in Gaza] benefiting from the agency’s services.”

He added, “The US interference in the school curricula of UNRWA schools, especially the subjects of national education, religion and geography, and hiding the map of Palestine is a blatant interference that threatens future generations and undermines the primary role of UNRWA in preserving the rights of refugees.”

UNRWA’s pledge that no Palestinian refugee receiving military training would benefit from the US contribution is a “serious precedent in the way a UN organization deals with refugees," the UNRWA Department in the Democratic Front for the Liberation of Palestine said in an Aug. 21 statement. "This places economic pressure on them and impedes their struggle to regain their occupied lands with the recognition of the UN itself."

On Sept. 2, the Higher Follow-up Committee of Palestinian factions in the Gaza Strip sent a letter of protest to UNRWA Commissioner-General Philippe Lazzarini in response to the cooperation framework.

Mohammed al-Madhoun, head of Hamas’ refugee department, told Al-Monitor that the Palestinian factions were not aware of the terms of the framework before signing it in July.

“About a month after it was signed, the framework was published on the website of the US State Department, and the factions worked on translating and discussing it in several workshops before it was rejected,” he added.

In a statement issued on Sept. 2, Hamas said the framework included conditions that it described as “dangerous and humiliating.”

The movement announced its rejection of any measures that would be taken against the staff or beneficiaries of UNRWA based on this framework.

Mustafa al-Sawaf, a political analyst close to Hamas, believes that the cooperation framework “requires refugees to yield to US conditions, knowing that Palestinian refugees would not accept to remain mere recipients of aid, without preserving the refugee identity and the right of return, which are the foundations of UNRWA. This framework is gradually eliminating the refugee issue.”

Economic researcher Mohammed Nassar told Al-Monitor, “There are Palestinian concerns over the cooperation framework because despite its positive aspects, its funding is subject to political conditions … .”