The row over UNRWA, including its funding, may strain bilateral relations between Jordan and the United States, as Amman rallies international partners to step in and compensate for the suspension of US funding. 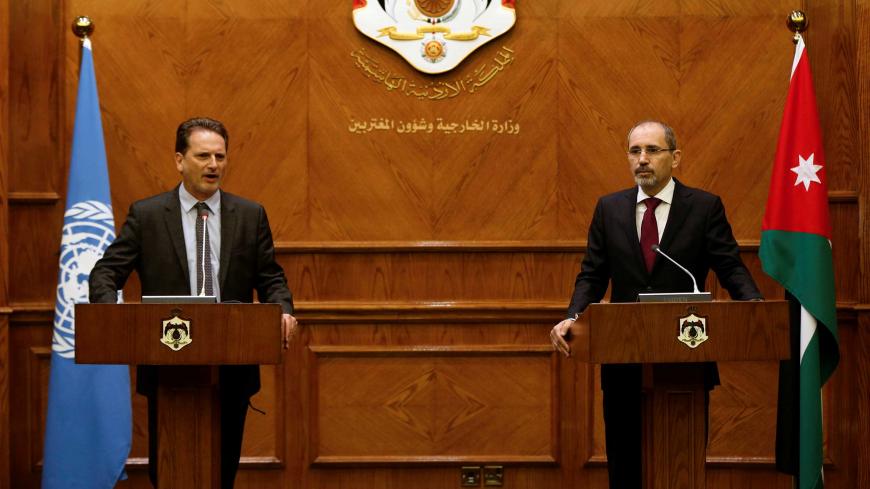 Jordan and the United States could be on a collision course over the fate of the United Nations Relief and Works Agency (UNRWA), which is responsible for more than 5 million Palestinian refugees. Amman and Washington have completely divergent views on the agency's future. The United States is taking steps to defund it, while on the other hand, Jordan leads an international effort to raise money to keep it in business. This is one battle Amman cannot afford to lose.

It was reported on Aug. 28 that the Donald Trump administration had decided to end all funding to UNRWA, eight months after it cut more than half of its planned contribution to the agency. In January, the US State Department had announced that it would withhold $65 million of a $125 million aid package to the 70-year-old UN agency. The department said in a statement that additional US contributions would be contingent on UNRWA making some major changes.

Jordanian Foreign Minister Ayman Safadi met on Aug. 30 in Amman with UNRWA Commissioner-General Pierre Kraehenbuehl and announced that the kingdom is organizing a conference to be held on the sidelines of the Sept. 27 meeting of the UN General Assembly in New York, to raise funds and generate support for UNRWA. Sweden, the European Union, Japan and Turkey will co-sponsor the event along with Jordan.

Safadi said that the goal is to compensate for a $217 million budget deficit and find ways to facilitate continued financial support for UNRWA. Jordan will also call an emergency meeting of Arab foreign ministers to discuss ways to support the agency. UNRWA is active in Lebanon, Syria, the West Bank and Gaza, as well as Jordan.

Reuters quoted Safadi as saying, “Any shortage in funding will drive hundreds of thousands towards deprivation and despair.” Meanwhile, Kraehenbuehl remarked, “One cannot wish 5.3 million Palestine refugees away. These are people who have rights, and for many years now, for decades, have faced a plight and injustice that is simply immense.”

Neither the Palestinians nor the Jordanians believe that the US position is solely aimed at producing structural changes within UNRWA. On Aug. 28, and in the wake of Foreign Policy report, US Ambassador to the UN Nikki Haley was reported to have questioned the credibility of Palestinian claims to a “right of return” to what is today Israel. The right of return is one of the major so-called final-status issues to be negotiated between Israel and the Palestinians under the Oslo Accords.

There have been recent media reports that the United States is about to roll out a new position on the right of return while debunking UN criteria for determining the current number of Palestinian refugees. On Aug. 25, one Israeli media outlet asserted that the United States will soon issue a report claiming that there are only about half a million Palestinians who should be legitimately considered refugees.

Last July, a number of US senators introduced a bill to recognize only 40,000 Palestinian refugees, instead of 5.3 million. Republican congressman Doug Lamborn of Colorado said in a statement, “Refugee status is not something that can be handed down from generation to generation,” referring to the descendants of Palestinian refugees who were born and are living in other countries. This is why Jordan is risking its ties with the White House to lead the effort to save UNRWA.

If only half a million Palestinians are considered to be refugees, what happens to the rest? Under the new US criteria, of Jordan’s more than 2 million registered Palestinian refugees only a few thousand would retain refugee status. The rest would be settled permanently in the kingdom, a prospect that raises internal problems and existential fears involving issues of demographic balance and political rights. This would comport with claims by Israeli far-right politicians that Jordan is a Palestinian state.

Amman has opposed all of the Trump administration’s recent decisions pertaining to the Palestinian issue, from Trump’s recognition of Jerusalem as the capital of Israel in December to the relocation of the US Embassy from Tel Aviv to Jerusalem in May. King Abdullah II is a staunch advocate of the two-state solution as set out by the Oslo Accords and UN resolutions. The Trump administration, which has been working on a plan to resolve the Arab-Israeli conflict, has not endorsed the two-state solution. Instead, Trump himself has said that he is open to alternatives.

Despite Jordan’s opposition to US policies on this particular issue, Amman and Washington remain close allies, with the kingdom receiving an aid package of about $1.5 billion annually. Jordan is increasingly wary, however, of the so-called ultimate deal that the Trump White House is finalizing. Abdullah met with Trump in June in what was seen as a last-ditch effort to influence the proposed peace plan.

The row over UNRWA may strain bilateral relations, as Jordan rallies international partners to step in and compensate for the suspension of US funding. In the view of Jordanian analysts, the attempt to defund UNRWA is as crucial as the recognition of Jerusalem as Israel’s capital. It is one more step toward dismantling, and eventually liquidating, the Palestinian issue, enacting it from existence.

For Amman, the stakes have never been higher. Its only choice now is to confront US moves through diplomacy, even at the risk of annoying its closest ally.