The report said the National Security Agency threatened human rights defenders with arrests and prosecutions, and questioned them about their political activity on social media. 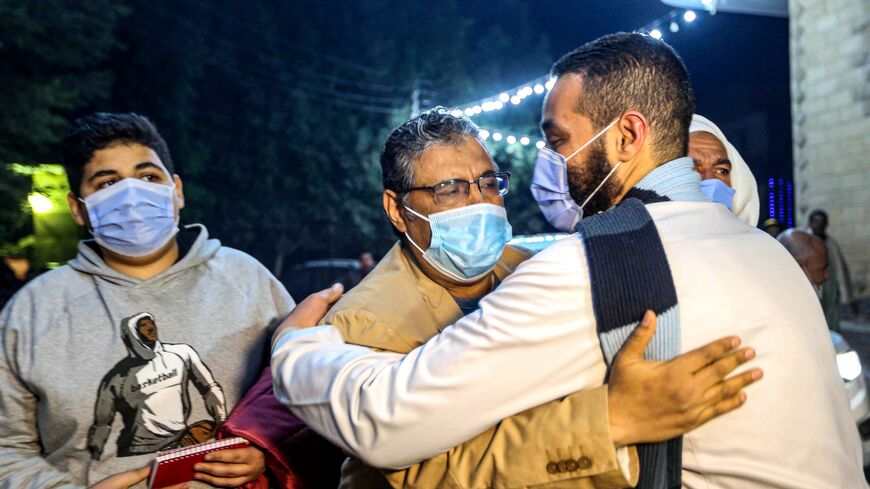 Mahmoud Hussein (center), an Egyptian national journalist for Al Jazeera Arabic, is embraced by a man at his family home south of Cairo on Feb. 6, 2021 upon his release from detention after four years without trial. Amnesty International released a report Thursday accusing Egypt's National Security Agency of harassing and intimidating human rights defenders. - AFP via Getty Images

The London-based rights group interviewed 28 people who said that the NSA, which handles terrorism and political cases, threatened them with arrest and prosecution unless they attended police interrogations. The report says the intimidation tactics have increased over the past two years, with thousands of activists impacted.

Those summoned were questioned about their political views, including opinions expressed on social media. If they failed to show up for questioning, their homes were raided, Amnesty said.

Interviewees told Amnesty they were “living in constant fear of being detained by the NSA,” and as a result, most were too scared to participate in political activities. Some are now in exile.

Amnesty reports victims had no avenues for legal redress. They feared retaliation were they to file formal complaints with prosecutors or publicly denounce their experiences.

“This new NSA tactic of persistent intimidation and harassment of activists, lawyers and NGO workers is one that is destroying lives. It prevents them from working, traveling and means they live under constant fear of arrest,” said Philip Luther, Amnesty International’s research and advocacy director for the region. “NSA officials’ questions and threats reveal one clear objective: to stifle human rights and political activism.”

The rights group said the NSA’s tactics violate international law and standards, as well as the Egyptian constitution and Code of Criminal Procedures. Amnesty called on the UN Human Rights Council to establish a monitoring and reporting mechanism on Egypt and for the country’s public prosecutor to investigate the NSA’s practices.

“Egypt’s President Abdel Fattah al-Sisi and the minister of interior must end this extrajudicial harassment of human rights defenders and activists,” Luther said.

Under Sisi, a former military general who seized power in a 2013 coup, Egypt has jailed tens of thousands of journalists, activists and other perceived critics, including several US citizens. Last week, a report from Human Rights Watch documented the extrajudicial executions of dozens of alleged terrorists at the hands of Egyptian security forces.