Sanaa Seif was filing a complaint at the public prosecutor's office when her family says she was forced into a minivan. 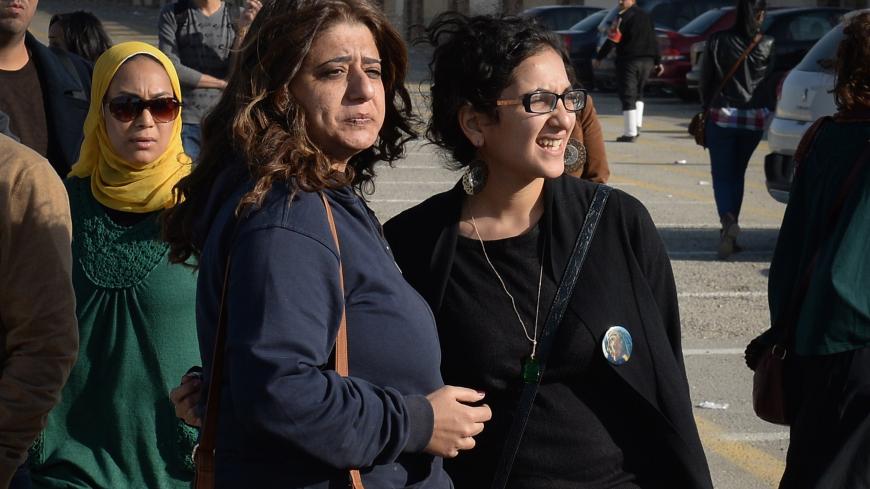 The sister (R) of Egyptian rights activist Sanaa Seif stands outside a court in Cairo on Dec. 28, 2014, along with friends and relatives of the 22 other pro-democracy activists accused of holding an illegal protest last June, after an appeals court reduced the jail sentences from three years to two. - MOHAMED EL-SHAHED/AFP via Getty Images

According to the family, authorities detained Sanaa and are charging her with "spreading false rumors, inciting terrorist crimes" and "misuse of social media."

The 26-year-old activist was waiting outside the public prosecutor’s office on Tuesday to file a complaint related to an attack on her family the previous day. She, Mona and their mother say they were attacked by a group of armed women outside the Tora prison complex Monday while police looked the other way.

“We have been beaten up, dragged by the hair, clothes torn in front of Tora by women thugs on the watch of all police there,” Mona tweeted.

The three women were there to receive a letter from Sanaa’s older brother, activist Alaa Abdel Fatah, who has been detained since September 2019 over anti-government protests. He launched a hunger strike, and his family has sought his release amid the coronavirus outbreak in Egypt’s prisons.

In a statement Tuesday, Amnesty International called on Egypt’s authorities to “end their relentless harassment” of the family and immediately and unconditionally release both Sanaa and her brother.

“Sanaa Seif and her family have suffered years of harassment and intimidation for their human rights activism, but the events of the past two days mark another new low,” said Philip Luther, Amnesty International’s research and advocacy director for the Middle East and North Africa.

“The fact that Sanaa Seif was taken from right outside the public prosecutor’s office shows just how brazen the Egyptian security forces have become,” Luther said.

Acting under the authority of President Abdel Fattah al-Sisi, Egypt’s security forces have stepped up their crackdown on dissenting voices. In May, the editor-in-chief of a prominent independent newspaper was arrested while interviewing Sanaa's mother, Laila, about her jailed son.

Rights groups say a number of political activists and journalists have been forcibly disappeared or imprisoned for criticizing the Egyptian government’s handling of the coronavirus in recent months. Security forces recently arrested Mohamed Monir, a prominent journalist, after his interview with Qatari TV channel Al Jazeera, and charged him with joining a terrorist group and spreading false news.