The Egyptian government plans to increase the number of stations targeting Africa and the Nile Basin countries in order to promote the Egyptian position on the Grand Ethiopian Renaissance Dam. 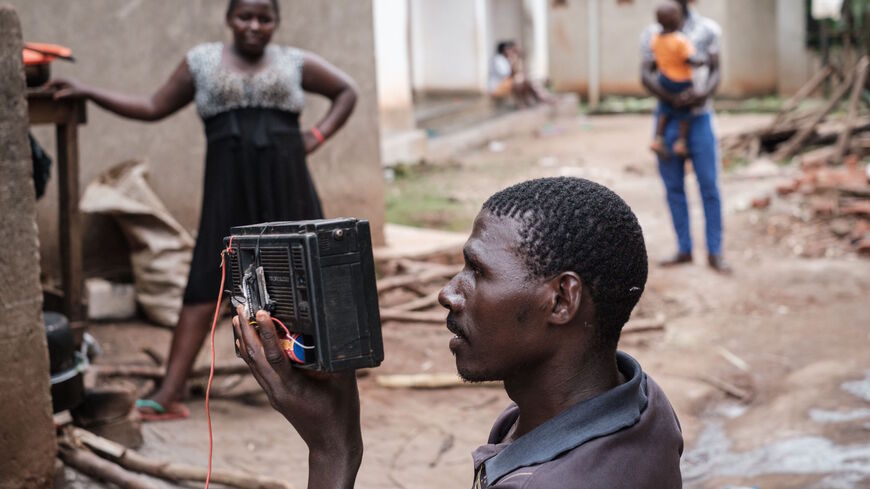 Joseph Kazibwe listens his radio for the final announcement of Presidential election near the home of Presidential candidate Robert Kyagulanyi, aka Bobi Wine, as he stays with his wife in Magere, Uganda, on Jan. 16, 2021. - YASUYOSHI CHIBA/AFP via Getty Images

Amid the ongoing dispute over the Grand Ethiopia Renaissance Dam (GERD), Egypt is working to expand its broadcasting system targeting Nile Basin countries to promote Egypt’s positions on a number of issues, including the GERD.

“The [African Affairs] committee will make an effort with those in charge of media outlets to find out how to launch more Egyptian radio stations targeting Africa,” he added.

The calls come as part of President Abdel Fattah al-Sisi’s efforts to restore Egypt’s role in Africa. In the 1960s, Egypt had several radio stations broadcasting to Africa to strengthen the country’s influence on the continent. But several stations were shut down under Mohamed Hosni Mubarak.

On Aug. 4, 2020, the Egyptian embassy in Burundi announced the re-broadcasting of Egyptian programs in the Swahili language from within Burundi itself. “This is a new and pioneering experience," the embassy said at the time, "as the Egyptian radio is seeking more communication channels with the African brothers, especially the Nile Basin countries, in order to strengthen communication between African peoples and Egypt.” Programs are broadcast for two hours in the morning and two hours in the evening, the embassy said.

The radio partnership between Egypt’s National Media Authority and Radio Culture FM, the second private radio station in Burundi, covers Burundi and some neighboring countries such as the Democratic Republic of the Congo, Rwanda and Tanzania, all of which are located in the Nile Basin.

During a visit to Cairo in 2017, a Rwandan official delegation discussed with Egyptian officials ways to transmit Egyptian radio programs on the Voice of Africa radio station, which broadcasts from the Rwandan capital Kigali. Rwandan ambassador Saleh Habimana, who headed the delegation, said that his country seeks to “increase Egyptian radio programs broadcast to Rwanda to get to know the Egyptian position on the fight against terrorism, through political and religious programs prepared by Al-Azhar scholars to clarify the moderation of Islam and its rejection of violence and extremism.”

Mohamed Nawar, the head of Egyptian Radio (also known as Radio Cairo), said May 31, “The Egyptian state has started a project to re-run Egyptian programs [in Africa]. So far, the government has changed the name of the Egyptian Directed Transnational Radio Network to the Network of International Channels, which offers services in 23 languages, including seven or eight African languages.”

In press statements in 2019, Hazem Abdel Wahab, director general of the radio network's African service, said 10 radio stations target Africa, providing services in Arabic, English, French and six African languages: Swahili, for Eastern Africa and the Nile Basin, Amharic for Ethiopia and part of Eritrea, Somali in the Horn of Africa, Afar in Djibouti, Hausa in Nigeria and Ghana, and Fulani in Cameroon and Senegal.

“Directed radio stations should play an important role in clarifying the Egyptian position on the GERD crisis,” Hani Raslan, head of the Sudan and Nile Basin Studies Unit at Al-Ahram Center for Strategic Studies, told Al-Monitor. “Over the past years, Ethiopia has worked to distort Egypt’s position in the GERD crisis before the peoples of the Nile Basin countries, and it used all media and social media outlets to achieve that goal.”

He added, “As part of efforts to increase its role in Africa, Egypt will work to increase the broadcasting of radio stations targeting the African continent.”