In his speech at the UN General Assembly, Prime Minister Naftali Bennett made it clear that he, not the health authorities, have the final say on the national campaign against the coronavirus. 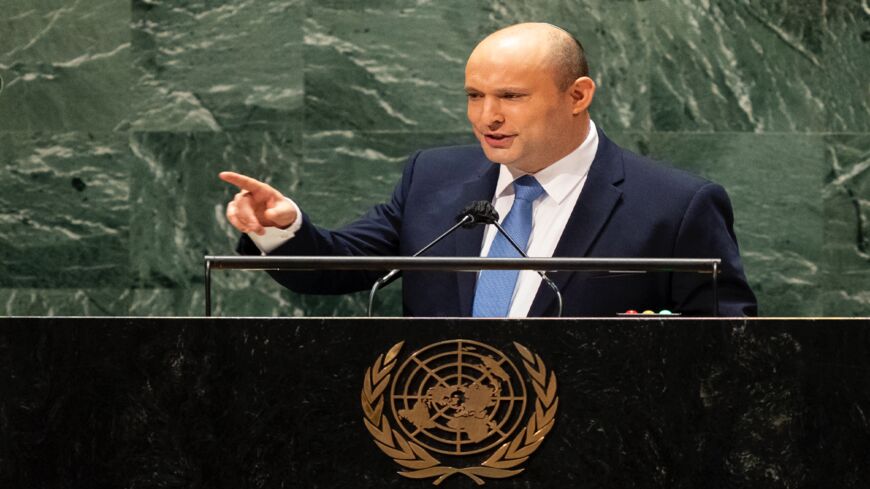 Only a few minutes before entering the plane that would fly him to Israel, and after his first speech to the United Nations, Prime Minister Naftali Bennett delivered a quick statement to the media. The Sept. 28 statement did not deal with the warnings he had delivered a day earlier in his UN speech regarding Iran, which is advancing toward a nuclear bomb. Rather, his statement targeted another topic brought up in his UN address: the government’s policy on battling the coronavirus.

Bennett said in his UN speech, “Running a country during a pandemic is not only about health. It’s about carefully balancing all aspects of life that are affected by [the coronavirus], especially jobs and education. While doctors are an important input, they cannot be the ones running the national initiative. The only person that has a good vantage point of all considerations is the national leader of any given country.”

Health officials who listened to the speech came out with the impression that Bennett criticized them directly for their management of the crisis. These sentiments generated a real political and media-related storm in Israel. More so, Bennett was forced to explain why he chose to wash his political dirty laundry in the UN forum, which seemed to put the Iranian threat on the back burner. He also chose to ignore in his speech the Palestinian-Israeli conflict.

In order to understand how his words against the health system were so problematic in the forum in which he chose to express them, we must examine the context of Bennett’s UN appearance and the atmosphere in Israel right before the event.

For the first time after 12 years, someone who was not former Prime Minister Benjamin Netanyahu would take the podium. This in itself was dramatic for the Israeli public. Thus, the national TV channels were all set to broadcast the speech live, even though it took place just hours before the last of day Sukkot.

This moment of the speech was a very important one to Bennett in order to mold public opinion. The prime minister has the backing of only six Knesset members, and from the time he assumed office, he has not succeeded in garnering significant support in public opinion polls. Bennett was hoping that with time, Israelis will get used to and appreciate the new prime minister. That did not happen. Subsequently, Bennett has not been able to free himself from Netanyahu’s shadow — something that bothers him obsessively.

Netanyahu was known for introducing gimmicks in his speeches in order to ensnare international public opinion. In the days prior to the UN speech, the prime minister’s media adviser, Matan Sidi, told journalists the address “will be in a different in style from Netanyahu's speeches; there will be no aids, Bristols, paintings, etc. The message will not be just warnings and warnings but a simple statement: Israel will do what is necessary." Bennett, who likes to make fun of the former prime minister, did not miss this opportunity as well.

And in truth, Bennett did not take charts out of his sleeve, and yes, he spoke fluent English (it is his mother tongue). But the content of the first part of his speech was surprisingly meager. While the international community is occupied with the feasibility of reaching a new agreement with Iran and with solving the climate issue, Israel’s prime minister praised himself at length for coping successfully with the fourth round of COVID-19.

Data published in recent days indicate this assertion does not really reflect the Israeli reality, to put it mildly. In this last month, an average of 20 people died every day from COVID-19; hundreds of very sick people populate the hospitals, and morbidity is extensive. Under Bennett, there are no limitations on gatherings, the economy is open, and Bennett hopes the booster vaccines will do the job. One could argue about whether this was a successful model or not, but it is clear this policy has taken a very high toll on human life.

The question is, why did Bennett bring up the coronavirus issue specifically in this forum (the UN)? Why would a prime minister use the UN to lock horns with professionals in his country’s Health Ministry in order to glorify himself under such conditions?

Analysts believe the answer is that Bennett “needs” this ruckus for political reasons. The background of all this is the growing tension between him and the high-placed Health Ministry people, who have been demanding the government limit gatherings and crowds for the last two months. They feel this is the only way to halt the current, harsh COVID-19 wave in Israel.

A few days before Bennett’s trip to the United States, a cabinet of experts who weigh in regarding COVID-19 published a document with their recommendations, together with criticism of the government’s policy of avoiding any limitations on crowds and gatherings. Simultaneously, the higher-ups in the Health Ministry expressed internal criticism that the COVID-19 Cabinet was not assembled on purpose for several days, allegedly so they would have no forum to express their opinion to the public at large.

Due to this policy, Bennett was attacked by his political enemies, headed by Netanyahu; the latter accused Bennett of failing to take control of the fourth round of COVID-19 in the country. Therefore, it seems, in the last two weeks, Bennett has directed his fire toward the Health Ministry and its higher-ups. Behind the scenes, he complains the Health Ministry is sowing panic and fear.

Despite all this, no one thought Israel’s prime minister would take advantage of a prestigious international visit to settle accounts with his overworked, struggling professionals facing a COVID-19 wave. It appears he is trying to make himself look good and place the blame on his Health Ministry alone.

This brings us back to Bennett’s Sept. 28 statement to Israeli correspondents. With it, it became clear his remarks at the UN were no mishap. The prime minister said he "greatly respects" the medical experts advising his Cabinet. Still, he repeated he is not committed to implementing all recommendations proposed by them, stating "they don’t see the full picture" and insisting ultimately it is his responsibility.

Evidently, this was one criticism too many for the higher-ups of the Health Ministry, who responded with their own offensive on the prime minister. They said Bennett was behaving childishly and does not know how to accept criticism. Health Minister Nitzan Horowitz also distanced himself from Bennett’s position and said, “I think it was unnecessary, and I am sorry that it was done.”

Numerous commentators did praise Bennett and said he was successful in making his first speech in the UN. They said he conveyed self-confidence, presented a pragmatic approach vis-a-vis Iran, and of course he spoke good English; he deserved praise. But the truth is that ultimately, his speech will be remembered here in Israel for its ugly attack on the Ministry of Health. Bennett expressed scorn for the physicians and other health-related experts who have been on the front-line battlefields against the COVID-19 plague for almost two years.

Bennett had said at the UN that he wants to offer “a new kind of politics.” But in actual fact, he is apparently busy trying to restore his image in the polls, and he tramples on the dignity and honor of the professional echelons.