The Turkish government’s conduct during the wildfires that engulfed Turkey’s coastline has not only led to devastation of the country’s forests, but also caused loss of the nation’s sense of solidarity in the wake of natural disasters 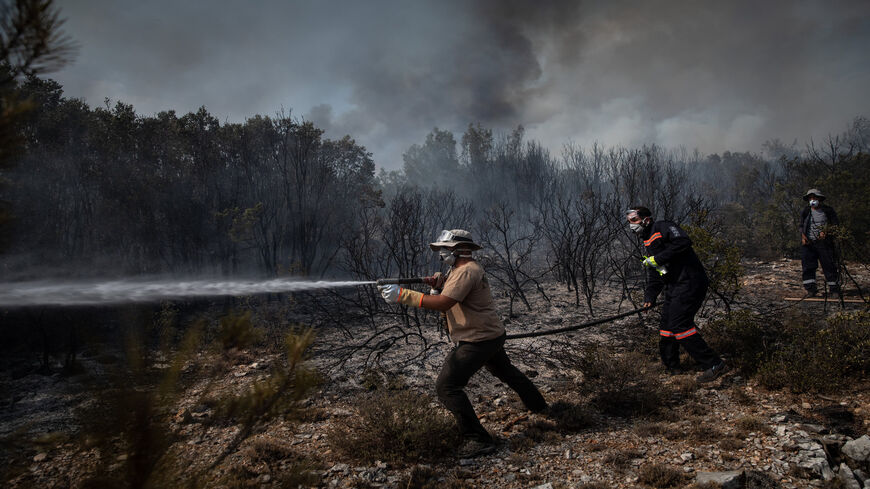 Undoubtedly, the wildfires that started in late July and devastated the forests overlooking the idyllic beauty of the turquoise waters of its southwestern region are the worst Turkey has ever experienced. Between July 28 and Aug. 5, some 180 forest fires broke out in 38 of the country's 81 provinces. More than 15 planes, nine drones, six helicopters, 850 fire extinguishing trucks and 5,250 personnel have been fighting to extinguish the wildfires.

Up to Aug. 4, wildfires had consumed almost 95,000 hectares (234,650 acres). Nearly 50,000 people have had to leave their damaged homes, and scores of resorts and hotels were evacuated at the peak of the tourism season.

Millions of Turks are watching the wildfires on TV in despair. On the one hand, it deepens the sentiments of patriotism with people witnessing Turkey's most beautiful parts succumbed to wildfires, and on the other hand, it increases national trauma.

The public is expressing anger toward those who are considered responsible for this latest and unprecedented catastrophe the country is facing.

Conspiracy theories are rampant, as, after all, Turkey is a highly polarized country. Right after the wildfires began, the Kurdish insurgents were blamed. Several tweets appeared accusing the Kurdistan Workers Party (PKK), which is considered a terrorist organization by Turkey and the United States, of the wildfires.

“There is no negligence or coincidence here. The state is facing Greek-PKK terror,” said former Rear Adm. Cihat Yayci, who is the author of the controversial Blue Homeland map that stretches Turkey’s maritime boundaries up to Libya. In an Aug. 2 interview with A Haber, a pro-regime TV channel, he insinuated that the United States also backs the PKK.

In the intolerant climate of authoritarianism confronting the conspiracy theories is a daunting task, as it would invite the accusation of abetting terrorist organizations and acting as the pawns of Turkey’s foreign enemies. Nevertheless, as the wildfires spread across the country — and also to Greece, Lebanon, Italy and Spain — the appeal of the conspiracy theories blaming foreign and domestic enemies for calamity have begun to wane. Even government officials appeared to have dropped the earlier claims that the fires were started by children, careless individuals who threw away their burning cigarettes or the treacherous PKK militants.

The reason behind the natural disaster that engulfed the most beautiful landscape of Turkey’s territory seemed to be the inevitable consequence of the climate change that is affecting the entire globe in different ways. The Turkish government was caught unprepared. The allegedly emergent great power, the mighty Turkish state — a regime propaganda that the Turkish public has been subjected to for years — revealed its unpreparedness and impotence against severe natural events. The outcome could have been different had the Turkish state not let the firefighting fleet of the Turkish Aviation Institution rust. When the wildfires spread, Turkey could not operate one single firefighting plane.

The opposition reminded the public on social media, which still remains partly independent from the total control of the government, that while President Recep Tayyip Erdogan spent millions of Turkish lira to augment the presidency — its fleet includes 16 luxurious aircraft — Turkey has no firefighting planes.

In the wake of the wildfires, conspiracy theories and staunch nationalism paralyzed the regime, preventing it from asking the international community for assistance. However, in early August, the European Union, Greece, Israel and many other countries proposed sending firefighting planes. Erdogan's communications director, who is ironically and consistently likened to Goebbels by the opposition on social media, claimed the #HelpTurkey campaign was orchestrated by a single entity, implying the Western world in general, and the United States in particular, in a bid to present Turkey as a “weak state.” He said the Turkish state is strong and capable of overcoming the wildfires and does not need outside assistance. He began spreading another hashtag: #StrongTurkey.

Erdogan’s main ally, Devlet Bahceli, chairman of the ultra-nationalist Nationalist Movement Party, broke his silence Aug. 2. Like Erdogan’s communications chief, his written statement blamed the wildfires on “the supreme mind,” which is perceived as a synonym for the United States and the West. According to Bahceli, calls for help from outside were serving to attempt to paint Turkey as an ungovernable, weak country. He accused the main opposition party — the Republican People’s Party (CHP) — for being at the center of the so-called anti-Turkey plot.

The first days of the wildfires were spent with unnecessary arrogance until the government conceded to accept the firefighting planes from Spain and Croatia, and helicopters from Russia, Ukraine, Iran and Azerbaijan. On Aug. 4, Foreign Minister Mevlut Cavusoglu announced that two private Turkish companies had rented two Israeli firefighting planes. Not only did Turkey not respond to Israel's official offer, but the Greek assistance offer also remained unanswered.

The code of conduct during the devastating earthquake in 1999 was just the opposite. Greece generously had rushed to help, followed by Israel, and it had led to the “gilded age” in diplomacy and bilateral relations between the two neighboring countries of the Aegean.

The assistance from outside Turkey to help extinguish the fires arrived late and was insufficient due to the government's reluctance to accept any help.

The failure in confronting this natural disaster also has a domestic political dimension that will inevitably come to the forefront soon. In a live TV interview on the night of Aug. 4, Erdogan, speaking to a group of cherry-picked reporters close to him, blamed the mayors of the provincial centers of Mugla, Antalya and Aydin where the wildfires were raging.

The mayors, of the main opposition CHP, won stunning electoral victories in the municipal elections in 2019 that had embarrassed Erdogan and jeopardized his chances for reelection in the upcoming elections scheduled for 2023, the centenary of the foundation of the Turkish republic.

The government's reluctance to cooperate with the mayors who belong to the main opposition party in the fire-inflicted areas gave way to speculations: Erdogan and his party aimed to discredit the opposition.

Erdogan's Aug. 4 remarks — when the flames had reached Turkey's most important thermal power plant threatening a disaster — served as a confirmation of such alleged sinister political calculations.

The mayor of Mugla, the province that hosts Turkey’s many touristic natural beauty gems, took the brunt of the calamity and was quick to respond to Erdogan. If the wildfires had started in the towns and spread to the countryside, Erdogan would be right. However, the mayor noted that the fires began in the countryside that falls under the government's responsibility and then approached the urban centers.

Over the last few days, the public anger has grown as the scale of the crisis has become more apparent and so has the government’s inability to deal with it. The Turkish public is losing its trust, feeling that no power holder will assume responsibility for failing to deal with this natural disaster. The wildfires exposed the seemingly irreconcilable ideological and political fault lines of Turkey. The polarization that Erdogan has caused over the years and that proved to be conducive for him in securing around 50% electoral support, in turn, has sapped the public of any sense of solidarity that any nation would need in times of disaster.

The political implications of the wildfires have led to certain speculations. Henri Barkey, an American scholar of Turkish origin, whom the Turkish regime has absurdly accused of being behind the botched coup on July 15, 2016, said that this crisis will take a tremendous toll on Turkey's political stability and weaken Erdogan’s hold. “Erdogan will only be going through the motion of governing; the emperor has no clothes, they burned along with forests and trees and homes,” he wrote.

Whether his appraisal is confirmed remains to be seen. What is quite sure is that the summer fire of Turkey 2021 did not only burn “the emperor’s clothes” along with forests and trees, it, perhaps, burned the sense of nationhood of the Turkish people.