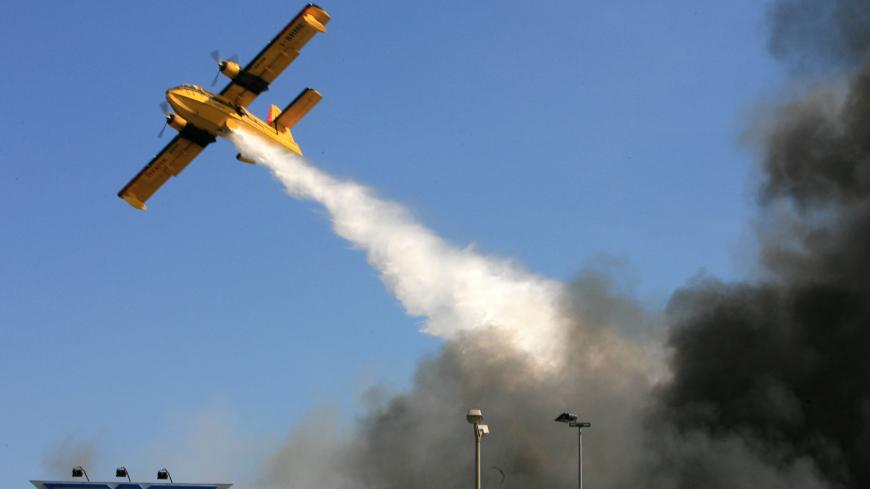 A firefighting plane dumps water over the black smoke and flames raging through the cargo section at Ataturk International Airport in Istanbul, May 24, 2006. - REUTERS/Fatih Saribas

Massive summer forest fires in Turkey have been very much in the news, along with heavy criticism that the Ministry of Agriculture and Forestry’s interventions have been inadequate. The fires have provided strong ammunition for the political opposition.

Major fires broke out in the renowned Mediterranean resort towns of Dalaman and Gocek in July and in the Aegean coastal provinces of Izmir and Canakkale in August. The ministry slow to send helicopters to fight the flames and refused to use three CL-215 fire-fighting planes owned by the Turkish Aeronautical Association (THK), saying the planes weren't safe, triggering severe criticism of Agriculture and Forestry Minister Bekir Pakdemirli.

THK issued a damning statement criticizing the ministry and alleged that although THK planes were ready to be used, the ministry had refused its offer.

“The controversy began when 400 hectares [988 acres] of forest were burning in Mugla province’s Dalaman and Fethiye districts back in July. We made contact with the ministry and readied our planes,” said a THK official quoted in the Turkish media. “We expressed that we could help for free, as these forests are Turkey’s national treasures. But they told us it wasn't necessary. If the authorities had accepted our help, we were ready to intervene.”

This drama has revealed two bitter truths. First, the ministry has no working fire-extinguishing planes. Second, hundreds of acres of forest in Turkey’s favorite tourism regions burned to ashes because of a quarrel between the two entities responsible for protecting them.

The conflict lies in part with the THK's staunchly secular stand against the Islamist Justice and Development Party (AKP) government. In return, AKP officials accuse the retired generals who run the THK of poor management and corruption.

But the struggle is more economic than ideological. Over the years, firefighting contracts with the ministry were a major source of THK revenue. But this year, the ministry awarded a contract worth some $30 million not to the THK — which is deeply in debt — but to an architecture company with no planes registered in its name. The company promised to bring in planes from Canada if needed, but relied on 24 firefighting helicopters leased by the ministry.

When the forest fires raged in July and August, the company failed to bring in planes from Canada. When it became known to the public that the THK had fully operational firefighting planes that the ministry refused to use, initial criticism of the THK shifted to the ministry. In the last week of August, the public was inundated with accounts of mutual accusations between the ministry and the THK while the vast forests were burning.

So why doesn't Turkey have a permanent fleet of planes and helicopters to fight forest fires? Because the ministry is leasing helicopters, paying some $3 billion over 30 years to create revenue for companies it favors, critics say.

During his Aug. 27 visit to Moscow to discuss the situation in Syria, Russian President Vladimir Putin took Turkish President Recep Tayyip Erdogan to the MASK 2019 aviation fair, where the Beriev Aircraft Co. Be-200 firefighting planes were on display.

After Erdogan’s visit, the Agriculture and Forestry minister, himself an amateur pilot, went to Beriev’s facilities in Taganrog for a review and test flight. Photographs that Pakdemirli shared on his personal Twitter account indicated he very much approved of the Be-200, a powerful amphibious plane that can also be used for search and rescue as well as reconnaissance and personnel transport. The plane’s only apparent shortcoming is its lack of night flight capability.

With the emergence of the Russian Be-200 option, the ministry ended its consideration of Japan's ShinMaywa US-2 and the Canadair CL-145.

Erdogan will make the final decision on whether to buy Berievs, and it's highly likely that the Turkish Ministry of Agriculture and Forestry will be getting five Be-200s for $175 million. Naturally, Russia badly wants Turkey to make the purchase.