The government faced calls to step down after it emerged that the country did not have any usable fire-fighting planes in its inventory. 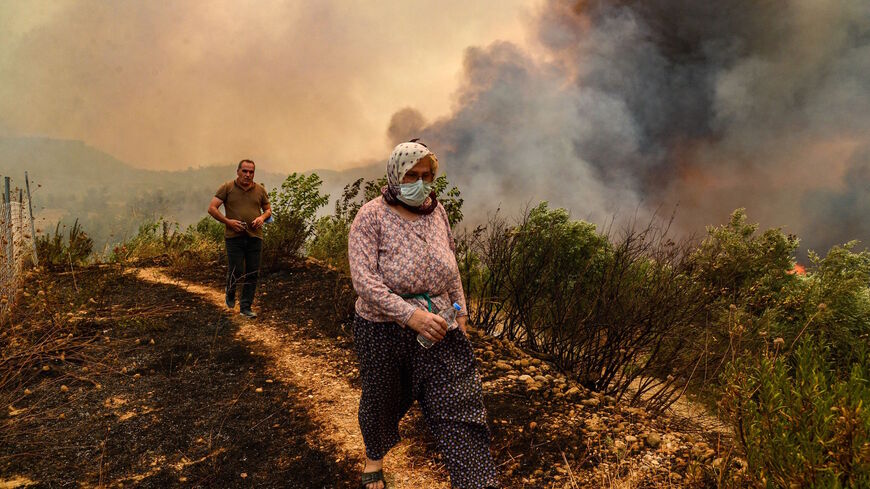 People walk past flames in a burning area during a massive forest fire that engulfed a Mediterranean resort region on Turkey's southern coast near the town of Manavgat, on July 29, 2021. - ILYAS AKENGIN/AFP via Getty Images

The European Union joined Turkey’s battle to extinguish wildfires that have been raging across the country’s coastal forests for a sixth day as the government faces mounting public anger over its perceived mishandling of the disaster.

At least eight people, among them firefighters and villagers, have died since the blazes erupted July 28 in and around Antalya, a popular tourist destination on the Mediterranean Sea. Thousands of farm animals have also perished in the fires affecting Edirne on the Bulgarian border and Tunceli in the mainly Kurdish southeast.

In Bodrum, panicked vacationers were escorted onto boats to escape the inferno while locals left behind saw their lives literally go up in flames. Images of blackened pine forests, dead sheep and charred homes continue to inundate social media. The hashtag for “Help Turkey” was retweeted millions of times in a rare acknowledgment by a typically proud nation that it's in need of outside assistance.

The government initially balked at accepting any such help, but as its own inadequacies became rapidly exposed, including a lack of operational firefighting aircraft, it caved.

On Monday, the EU dispatched three Canadair firefighting aircraft, two from Spain and one from Croatia. The aid came after Ankara activated a disaster response facility extended by European countries. Russia, Ukraine, Moldova, Georgia, Iran and Azerbaijan have already sent firefighting equipment to aid in the containment effort.

Fahrettin Altun, communications director for Turkish President Recep Tayyip Erdogan, said all but two of the 129 fires raging in 35 of Turkey’s 81 provinces had been brought under control. He claimed the calls for foreign help via social media were orchestrated from a “single center overseas” for the purpose of weakening the country and portraying it as “powerless.”

Flames were also reported to be licking the outskirts of Antalya’s Gundogmus district Monday. Authorities began evacuating its population of 2,100. Gundogmus Mayor Mehmet Ozeren warned if the district caught fire, it would likely spread to the neighboring Taurus mountains, which separate coastal areas on the Mediterranean Sea from central Anatolia.

On Friday, Erdogan asserted that the country did not have any usable fire-fighting planes in its inventory, prompting opposition calls for the government to step down.

Mursel Alban, a lawmaker for the main opposition Republican People’s party, said, “There is a 300-room summer palace in Marmaris, but no planes to extinguish fires in Marmaris. The president and all his ministers should resign.”

On Saturday, Erdogan ignited further controversy when he traveled to Marmaris under heavy police escort and threw packets of black tea at locals lining the roadside from a slowly moving bus. Critics drew parallels with US President Donald Trump flinging rolls of paper towels at hurricane evacuees in Puerto Rico. Erdogan pledged to provide financial assistance to victims and to rebuild damaged homes.

Pro-government media outlets have pointed the finger of blame at outlawed Kurdistan Workers Party militants — and Greece — for the conflagrations. Experts say climate change — with spiraling temperatures, dryness and gusting winds — is the likely cause. Wildfires, common in southern Turkey during the hot summer months, have engulfed neighboring Greece and Italy as well.

The economic toll of the fires has yet to be assessed. Its impact on Turkey’s multi-billion-dollar tourism industry, just as it begins to recover from a prolonged COVID-19 hiatus, is sure to be severe. Tourism accounts for around 13% of Turkey’s gross domestic product.

Bulent Bulbuloglu, the president of the Southern Aegean Touristic Hotels and Businesses Association, said 10% of tourists in the region had cut their holidays short and 10% of reservations had been canceled because of the fires. All eyes are turned to the United Kingdom, which provides the third-highest number of yearly visitors to Turkey after Russia and Germany. In late June, the United Kingdom placed Turkey on its "red list" of high-risk countries for COVID-19. It's expected to review the designation in mid-August. However, the number of cases in Turkey have begun to rise again, with 20,890 new cases recorded on Aug. 1, dampening expectations of a reprieve.