A Turkish airstrike has killed four members of a US-backed Syrian Kurdish force. 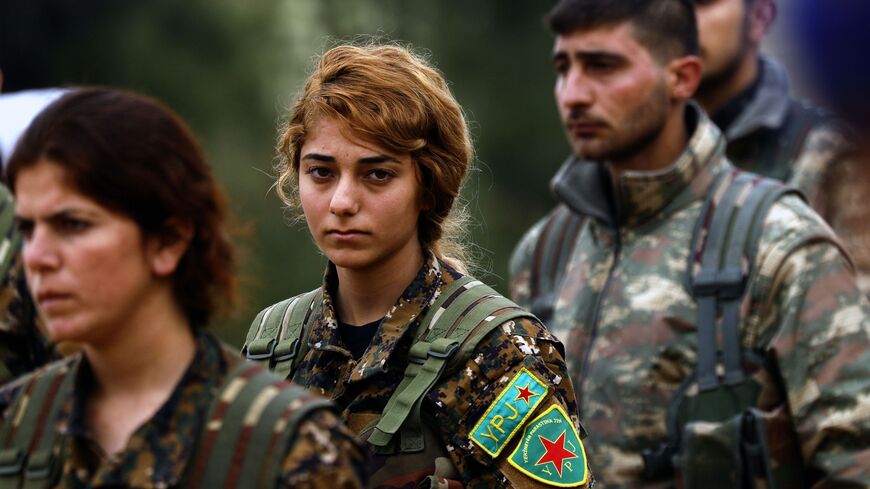 Fighters from the Kurdish women's protection units attend the funeral of a fellow fighter who was killed while fighting against the Islamic State in northeastern Syrian Kurdish-majority city of Qamishli Feb. 9, 2019. - DELIL SOULEIMAN/AFP via Getty Images

Four members of a US-backed Syrian Kurdish force were killed in a Turkish air attack on the town of Tal Tamar Thursday, according to the Syrian Democratic Forces, part of an escalating multi-pronged campaign against Kurdish militants in Syria and Iraq.

Ankara insists the male and female Kurds fighting within the SDF ranks pose an existential threat to Turkey because of their connections to the Kurdistan Workers Party (PKK), which is fighting for self-rule in Turkey. The insurgency that was launched in 1984, initially for Kurdish independence, has claimed at least 40,000 lives, most of them rebels.

Top SDF commander Mazlum Kobane has repeatedly said he wants peaceful relations with Turkey. However Turkey calls Kobane a “terrorist” and has placed a bounty on his head.

Sitting on the strategic M4 highway connecting the eastern part of the country to the west, Tal Tamer is notionally under Russian protection under the terms of a truce brokered by Moscow. The agreement was sealed following Turkey’s October 2019 incursion in the area that was greenlit by then-US President Donald Trump. Yet Tel Tamar and neighboring Ain Issa are frequently attacked by Turkish forces and their Syrian National Army allies as Turkey pushes for control of both.

Tal Tamar lies outside the area Turkey is allowed to control, as per the US brokered ceasefire agreement that was also signed at the time, noted Amy Austin Holmes, a public policy fellow at the Wilson Center. "In a previous analysis, I found Turkey had violated the agreement over 800 times in the first year after it was signed. Tal Tamar was targeted every month," Holmes told Al-Monitor.  "It appears to be an attempt to expand Turkey's territorial control and possibly change the demography of the historically Assyrian region along the Khabur [river]," she added.

Sosin Ahmed, a prominent commander from the Women’s Protection Units (YPJ) widely hailed for her bravery in the battle against the Islamic State, was among the victims.

American author Elizabeth Flock, who interviewed Ahmed for a forthcoming book, shared a photo of the slain fighter on Twitter, saying, “I can’t help but wonder if Turkey took advantage of the situation in Afghanistan for this attack, & how many unknown deaths can be tied to America’s destabilization of places.”

One of many stories that will never make headlines. Among the dead today in NE Syria from Turkish shelling is YPJ Commander Sosin. I interviewed her in May. My notes say “small in frame but commanding.” She said she joined militia as a girl bc “I was living in a land w/o freedom” pic.twitter.com/D5k9lazpDW

A four-year-old child and a woman were killed and around 15 other civilians were wounded in an attack Tuesday by Turkish and Syrian National Army forces on the village of Tawila near Tal Tamar, according to SDF officials. Pictures from the scene published by the Hawar News Agency showed several collapsed homes.

Just hours before Thursday’s drone strike, locals gathered outside a Russian base within close proximity of the targeted building to protest perceived Russian complicity in the attack on Tawila, Salih Muslim, a senior figure in the Kurdish-run administration in northeast Syria, told Al-Monitor. “The Russians would have known what the Turks were planning,” he said.

Russia is thought to be turning a blind eye because it wants the Syrian Kurds to scrap their alliance with the United States and strike a deal with Syrian President Bashar al-Assad.

But Assad has displayed no interest in granting Syria’s long repressed Kurdish minority any of the rights they currently enjoy in areas beyond his grip, including local self-governance and education in their mother tongue.

“There is no dialogue with the Syrian regime at the moment. There is some coordination on the ground, practical issues, since there are regime soldiers in northeast Syria. … Aside from this, there is no dialogue,” said Ilham Ahmed, the head of the Syrian Democratic Council, which is the political arm of the SDF.  Speaking to the Rojava Information Center, a local research outfit monitoring political and economic developments in the Kurdish-governed space, she added, “There are also regime forces on the border, there are discussions regarding this topic, but not for a political solution. This has not happened. The Syrian regime has a non-collaborative position.”

Muslim said he expected the Biden administration to rein in its NATO ally. “As far as I know, NATO is an organization based on democratic values and principles. Does bombing hospitals fit in with these values? Does killing civilians, women and babies, fit in with these principles? How come Turkey, a supposed NATO member, is allowed to get away with such actions?” he asked.

The US State Department did not respond to Al-Monitor’s request for comment.