Tunisia’s catastrophic third wave of infections this summer has exhausted doctors. Poor working conditions and lack of respite is driving doctors overseas, as medical chiefs warn of dangerous shortages of staff to fight a fourth wave. 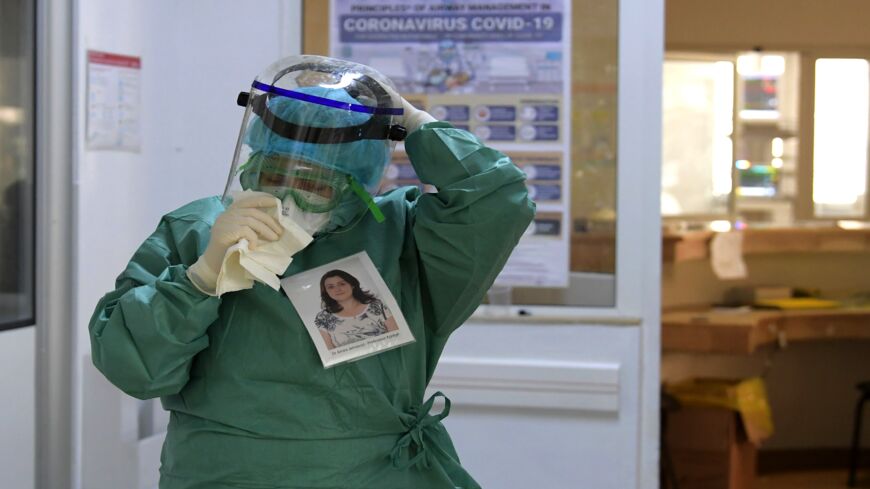 Amira Jamoussi, with a picture of herself pinned on her protective outfit to help others recognize her, gets ready to see patients at the Abderrahmane Memmi hospital, where people infected by COVID-19 are being treated, in the city of Ariana north of the Tunisian capital, Tunis, on April 24, 2020. - FETHI BELAID/AFP via Getty Images

TUNIS, Tunisia — Tunisia’s third wave of COVID-19 is subsiding and curfews are being relaxed as the mass vaccination program gets underway. Still, senior medics warn COVID-19 battle fatigue and poor working conditions are further driving doctors overseas, leaving the country vulnerable should a fourth wave arrive with the return to normal levels of international travel.

The pandemic has pushed Tunisia’s people and medical system to a near breaking point, in part precipitating President Kais Saied’s assumption of executive power on July 25. Despite donations of vaccines, equipment and medical support, senior medics fear that long-standing poor working conditions and being overworked without respite will drive doctors overseas, leaving the service in even worse shape than before the crisis and less able to cope should another wave arrive.

Professor Iheb Labbene, a specialist in anesthesia and intensive care treatment responsible for managing intensive care services during the pandemic, told Al-Monitor Tunisia's COVID-19 crisis began back in October 2020. Up to that point, Tunisia had tightly controlled the spread of infections through the use of total confinement and restricted openings of cafes and shops. “It was Tunisia's first wave, the second wave in the world, and hospitals were 80% filled with COVID-19 cases then.” The extended lockdown had battered its already fragile economy, and “sharp contractions in growth” were reported by the World Bank.

Mistrust between the people and the state had been fomenting as the country struggled to consolidate a stable government. Labbene said the two organizations responsible for COVID-19 strategies were in constant disagreement, with the National Scientific Committee — consisting of medical and pharmaceutical specialists — advocating sustained periods of confinement, and the National Committee — consisting of key ministries such as education, interior and finance — fearing the economic impact and costs of long lockdowns.

When infection rates threatened to peak, the government opted for brief, sporadic lockdowns that confused and angered the public. A four-day lockdown imposed for Jan. 14-17, 2021, proved the most incendiary, as normally January 14 is the annual national celebration of the 2011 Jasmine Revolution. But the festivities were banned. Prime Minister Hichem Mechichi provoked public demonstrations and violent night protests that lasted into March. Oumaima Ben Othman, who is training in internal medicine at Mongi Slim Hospital in Tunis, told Al-Monitor she believed mass demonstrations combined with poor mask compliance contributed significantly to the spread of the virus.

During the first vaccination drive in early summer, “The problem was that Tunisia did not have enough vaccines," Labbene said. This was reflected in the low levels of inscription to the Evax platform, a multichannel recruitment tool where citizens could register for vaccination. However, Labbene said, “[In some cities], up to 45% did not respond to Evax invitations.”

Distrust in government led to widespread belief in online conspiracy theories over evidence-based science, reaching a bizarre zenith when "Angelina 19," a TV series that airs pranks, aired during Ramadan. An Angelina Jolie lookalike invited celebrities and politicians to take the vaccine “Angelina” had donated on air, with other patients played by actors who collapsed, ostensibly sick from the vaccine. Angry Tunisian doctors and the World Health Organization condemned the series for "promoting conspiracy," Labbene said, adding, “I think we failed in public communication.”

The predicted July wave of infections, including the highly virulent coronavirus delta variant, proved the most devastating. The National Scientific Committee’s call for another lockdown was refused, Labbene said, as the government said “we cannot afford to finance three weeks of confinement.” Labbene believes a lockdown might have “saved some 3,000 lives.”

Othman and another doctor in training, Yosra Mouelhi, said this unit — which is normally dedicated to treating rare diseases — turned into a 100% frontline COVID-19 service.

Othman said at the peak on July 10-11, “People were dying because of a lack of beds; we were practicing catastrophe medicine. You’d ask someone where their sick family member was and they would point to them lying under the stairs or across chairs in the corridor. Seeing that was overwhelming.”

Othman and Mouelhi describe the morning’s meetings starting with the grim task of senior doctors deciding which patients would have a bed and oxygen. Labbene said the country had to adjust oxygen treatment protocols to manage oxygen supplies. All doctors admit that in the pressurized circumstances, the elderly were not given ICU beds. "Patients of 40-60 years of age have a good prognosis,” Labbene said, adding that treatment required stays in the ICU for around three weeks.

In July, hospitals were running out of oxygen with doctors making urgent pleas for help on social media as supplies sank to dangerous lows.

Labbene said the country only has two commercial oxygen producers, but in July demand was more than double the daily production. “We produce 110,000 liters of liquid O2 per day, but we were using 240,000 liters per day,” with some 4,800 patients receiving some sort of ventilation treatment. The situation was so bad that according to The Associated Press, black market dealing in oxygen for home consumption proliferated.

Othman said the delta variant meant they saw the nature of the virus rapidly evolve before their eyes. “We were seeing new symptoms and causes of death, such as air around the heart, or cases of emergency C-sections and treatment for premature babies whose mothers suffered respiratory distress."

Mouelhi complains that their training in internal medicine — the study of rare and complex diseases — has been halted by the pandemic. "We are seeing generation COVID-19 doctors,” Labbene said, adding there is the need to address their loss of time training in their chosen specialty.

After working around the clock since late June when the third wave began to surge, there is still no respite in sight, Mouelhi said. “We are tired, but I heard that they (the Health Ministry) might be canceling days off.” Othman, who denies suffering from PTSD, said, “After a long day of treating COVID-19 patients, you leave the hospital only to hear a wedding party. It's just devastating. I called it ‘The Apocalypse.’"

While the death toll has fallen, average weekly deaths are still between 120 and 130, reaching an overall total of 21,827 deaths on Aug. 15. Labbene said reduced infections were “not due to vaccination; this is just the nature of the wave."

Medical experts are also beginning to count the cost of all of the intensive treatment. Labbene said ordinary oxygen beds cost 600 dinars ($216) per day, with average stays of 10 days. The basic cost of an ICU bed was 1,600 dinars ($576 per day), with stays in ICU often up to three weeks — especially for patients aged 40-60. A rough estimate would put the minimum cost of running 600 ICU beds for three weeks at full capacity at 20.1 million dinars ($72.6 million), but a full assessment has yet to be done.

Following the president’s assumption of executive power under Article 80 of the Tunisian Constitution, videos of donations of vaccines and equipment were circulated to the press by the presidency. But this masked the real and long-standing issue of an ICU bed shortage. "We have just 600 [ICU] beds for 12 million people in Tunisia,” said Labbene.

ICU beds are still in high demand. Labbene showed Al-Monitor the specially created mobile app that helps him track ICU bed and oxygen usage, with beds still at 83% capacity. And a countrywide bed map showed the country to be mostly red, signifying ICU units nearing full capacity. The governorates of Tunis and Gafsa were colored black, meaning demand for beds was over capacity, requiring patients to be urgently transferred to governorates with available beds. Labbene said that although most ICU beds are in the capital, the pressure for beds meant “it is the first time I have had to organize transfers from Tunis to other regions such as Bizerte.”

But Tunisia’s intensive vaccination campaign is now underway, with two successful days of vaccinations and a pharmacy walk-in service having been launched. And while Tunisia has received 6 million vaccine doses from foreign donations for a population of 11.8 million, this still is not sufficient enough to fully vaccinate the country, and more vaccines are needed.

Looking ahead, an Institute for Health Metrics and Evaluation COVID-19 health data platform predicts a flattened curve for Tunisia this autumn, which gives Labbene hope. Still, the predictive curve shows a potential upswing of cases in France and Italy between September and November of this year, which — if normal travel resumes — could negatively impact Tunisia. Labbene warns that visitors' poor enforcement of quarantine again and the lack of visitor compliance could once again spread the virus.

Should another wave of infections come, Labbene said, Tunisia’s perennial problem of a medical brain drain could be much worse than usual. “Every year 1,200 doctors graduate, and every year we lose 600,” he stated. Should another wave strike, he said, “In terms of equipment and oxygen, we are ready. The biggest problem is the staff shortage.”

Othman and Mouelhi both said government efforts to block young doctors from leaving the country are failing. "Young doctors choose specialties where they can qualify the fastest and get a job overseas,” Mouelhi said, adding it was not about pay but about working conditions. “We are exhausted; we are all thinking about leaving Tunisia.”