Tunisia has started to ease lockdown measures, pointing to the relative success of the restrictions it imposed early on in the pandemic. 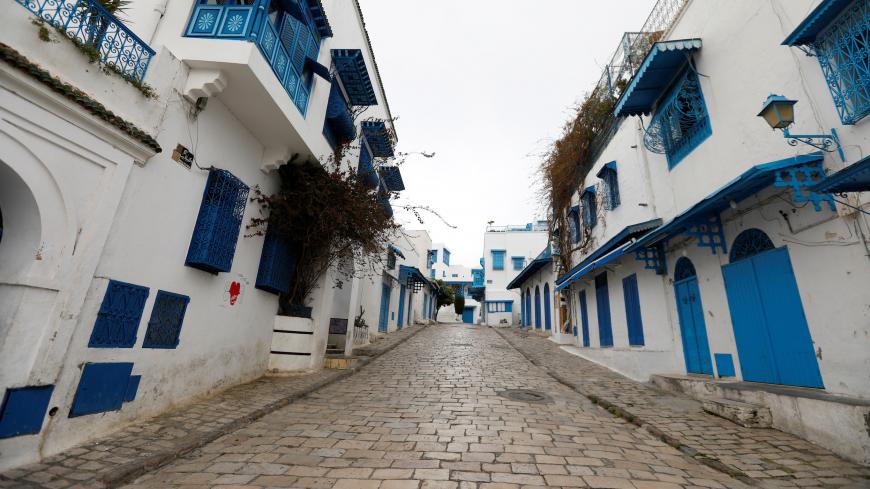 A general view shows a empty street in Sidi Bou Said, an attractive tourist destination, as the country extended the lockdown by two weeks to contain the spread of the novel coronavirus in Tunis, Tunisia, April 1, 2020. - REUTERS/Zoubeir Souissi

TUNIS, Tunisia — As global coronavirus cases began to climb in March, Tunisia had reason for alarm. Located just across the Mediterranean Sea from Italy — an early virus hot spot — and host to thousands of international travelers and residents, the North African country feared it could be the next to suffer a major wave of infections that would push its fragile health care system to a breaking point.

But now, some six weeks after lockdown measures were imposed, Tunisia seems to have kept the virus at bay, recording fewer and fewer new infections and readying to open back up.

“Despite a health system weakened by structural problems, Tunisia was able to respond to the COVID-19 pandemic in an exemplary manner,” Mohamed Ghedira, an anesthesiologist in the coastal town of Monastir, told Al-Monitor. “Even with its limited financial resources, there has been a strong determination of medical and paramedical staff and a tremendous mobilization of civil society.”

With just 327 active COVID-19 cases as of May 10, Tunisia’s rate of infections is far lower than most European and North African states. Algeria and Morocco each have at least 2,500 active cases, as well as a higher number of cases per capita, while nearby Italy, Spain and France are much harder hit, recording between 50,000 and 100,000 active cases.

The relative success of Tunisia, which eased its lockdown on May 4, was largely due to early preventative measures, medical professionals say, including a near shutdown of international travel, mandatory quarantines for those entering the country and a strict nationwide lockdown and curfew.

“The Tunisian government did not wait for many positive COVID-19 cases to be recorded before it reacted, very early, taking strict preventative measures to stem the pandemic,” said Ghedira. “In other countries, we saw football matches with stadiums full of people or political elections organized that furthered the spread of the virus.”

Tunisia’s nationwide lockdown began March 22, when it had just 75 confirmed cases. The UK, by contrast, did not impose a national lockdown until it had over 6,000 cases, while Italy did not go ahead with the measure until it recorded more than 9,000. Tunisia also took the early step of quarantining patients with mild symptoms in designated facilities such as hotels rather than allowing them to isolate at home as in Italy — a policy that doctors now say was a fatal flaw.

Tunisian government officials, meanwhile, did their part to instill a sense of urgency in the public, calling on residents to take health precautions seriously and respect confinement orders.

Prime Minister Elyes Fakhfakh rallied Tunisians by framing the struggle as a “war against an invisible enemy” during a national address March 21. Health Minister Abdellatif al-Makki made news when he broke into tears imploring the public to remain vigilant after cases began rising in April.

Authorities strictly enforced lockdown measures in high-risk areas, patrolling the streets and even arresting those in violation of quarantine and social distancing regulations.

Civil society groups and private businesses also played an important role in helping fight the virus. Some 150 Tunisian employees of a Consomed factory helped make face masks more accessible by self-isolating at their facility in order to produce 50,000 per day. Meanwhile, numerous start-ups and civil society groups mobilized to develop and provide innovative medical protective gear to hospitals and deliver aid packages to those in need.

Aymen Bouzayani, an emergency medical technician who works at a field hospital in the southern town of Zarzis, said Tunisia’s response has been effective because it is guided by medical advice, not politics. “The government and medical staff did not make political decisions or follow the attitude of other countries, but sought only medical advice,” Bouzayani told Al-Monitor. “They’ve done a lot of good work. They need to be honored.”

But for as much progress as Tunisia has made, officials warn that the crisis is far from over. And some are concerned that relaxed restrictions and increased movement during the fasting month of Ramadan could lead to another spike.

“We have successfully contained a first wave, but this is temporary as it depends on citizens' conduct and commitment in the days to come,” said Makki at a press conference April 29. “We are not immune to a second wave.”

Just as concerning is the lasting economic fallout of the crisis, which has decimated local businesses and taken a heavy toll on Tunisia’s most vulnerable, who are now forced to make do with a meager 200 Tunisian dinar ($70) monthly handout from the government

For those without jobs or income, there is little to look forward to. The International Monetary Fund estimates that Tunisia’s economy will contract 4.3% this year, while unemployment is expected to jump to 25%.

Tunisian economist Elyes Jouini, speaking at a May 7 web conference on the economic impact of coronavirus, said the country is in dire need of “a structured economic response … otherwise social tensions — which were already present before COVID-19 — could be devastating in the coming months.”

Medical professionals, often short-staffed and without proper equipment, are also looking for more support from the government.

Bouzayani pointed out that many hospitals, particularly in rural and interior regions, lack critical resources, such as respiratory assistance devices, medical specialists and some protective gear that are central to fighting COVID-19.

Tunisia only has an estimated 500 intensive care beds, most concentrated in the northern coastal areas.

Ghedira, for his part, added, “For many years, the health system in Tunisia has been exhausted. Hospitals are aging with an archaic management system, medical and paramedical personnel are underpaid and understaffed, and the Health Ministry’s budget continues to decline year after year as the needs of the sector explode.”

Despite the challenges, both medical workers felt hopeful about Tunisia’s prospects in continuing to fight the virus.

“I am so confident in fighting this disease with my coworkers,” said Bouzayani. “Tunisia has done a great job.”

“For my part, I consider that, for Tunisia, the hardest has been done and the days to come will see a decrease in the number of cases,” said Ghedira. “It will be necessary for the government, in collaboration with civil society, to insist on the respect of preventative barriers — including wearing face masks and social distancing — so that the lockdown is controlled and takes place in optimal conditions allowing the economy to restart.”