There are increasing warnings that a new coronavirus wave will reach the Gaza Strip amid concerns over a psychological crisis plaguing health workers due to Israeli restrictions. 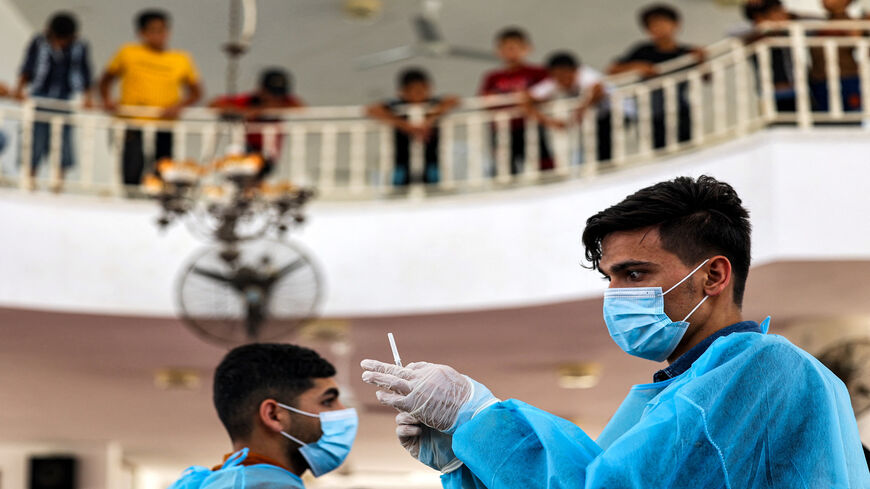 The Ministry of Health in the Gaza Strip is increasing its warnings of a new coronavirus wave in the coastal enclave, as nurses and doctors voice concerns over the arrival of the Delta variant that could lead to a wider spread of cases, thus imposing further psychological pressure on doctors amid the fragile health system due to the ongoing Israeli siege since 2007.

Medhat Abbas, director of primary care at the Ministry of Health in Gaza, told Al-Monitor that his ministry expects a strong third coronavirus wave in Gaza, saying, “If a Delta variant wave kicks in across the Gaza Strip, it will be harsh given the lack of safety measures and the severe overcrowding, which are set to lead to the rapid spread of the virus.”

He noted, “The medical staff have managed to overcome the first and second waves despite their difficulty. As for the new wave, it will require more advanced equipment amid shortages due to the siege that has been ongoing for 15 years now. We dealt with severe waves that exceeded 1,500 cases per day, and we hope that no such scenario will ever unfold again because of the lack of medical equipment."

The adviser to the minister of health in Gaza, Fathi Abu Warda, said during an Aug. 1 press conference that the ministry “is anticipating and concerned about the possibility of a new wave of the coronavirus in Gaza, which is home to about 2 million people.”

Abu Warda noted, “Gaza cannot tolerate any new waves or strains of COVID-19 in light of the Israeli siege and the scarcity of resources and medical supplies.”

Medical centers and hospitals in the Gaza Strip are currently facing a serious drug crisis. Director General of Pharmacy at the Ministry of Health Munir al-Bursh told Al-Monitor that drug shortages at the ministry’s drug stores are on the rise.

He said, “The increasing deficit poses a serious threat to the Gaza Strip amid the continued restrictions on the entry of medical and humanitarian supplies at the crossings since the end of the last war on May 21.”

Bursh noted that more than 42% of medicines and 33% of basic medical supplies are not available at the Ministry of Health in Gaza.

A report published by Medical Aid for Palestinians (MAP) in July mentioned the challenges that doctors faced in previous waves of the virus.

The report warned that the outbreak of a new wave, especially from the Delta variant, would lead to the further deterioration of the already fragile Palestinian health system, which would prompt medical workers beyond the brink of total exhaustion.

According to the MAP report, health workers in the Palestinian territories have suffered for decades from deteriorating infrastructure, limited access to specialized training and shortages of essential medicines and equipment. In addition, the report said, one should take into consideration the damage caused by the targeting of health-care facilities during the latest escalation in Gaza in May.

Nermin al-Hajj, a nurse who works at the children's oncology center at Rantisi Hospital in Gaza City, fears a new wave of the coronavirus.

She told Al-Monitor, “I fear another lockdown and another closure of crossings as the first and second lockdowns prevented patients from traveling leading to an increase in cancer patients catching the coronavirus at the hospital.”

According to the MAP report, obtaining a permit from the Israeli authorities to leave Gaza is a long process that is fraught with delays and arbitrary refusals. A permit can take weeks or even months to be issued. These delays, exacerbated in the past year by restrictions on movement due to the pandemic, pose a threat to the health of patients with potentially deadly consequences in the event of a new wave.

Nermin noted, “The spread of the Delta variant is 55% faster than the Alpha variant, according to the World Health Organization, which may cause overcrowding at hospitals, as well as a return to closures and disruption of life.”

In regard to psychological consequences, Nermin added, “The risk of transmitting the infection to my family and children is my biggest but not only fear. Following up on a certain case for a week or so and then having to bid the patient farewell because of the coronavirus is the most painful feeling ever. We get used to patients and we treat them as family.”

Nermin pointed out that her concerns are exacerbated due to the lack of capabilities available at the Ministry of Health in Gaza.

“I do not think that we are sufficiently prepared. In previous waves, we obtained personal protective equipment from international institutions working in the medical field, such as MAP, as the ministry was not able to provide us with these simple things,” she said.

“Instead of dedicating a room to every child with cancer, we had to treat two or three cancer patients in one room, hence the increased pressure to carefully use sterilizers and other preventive measures to stave off the transmission of the virus among patients,” Nermin added.

Because of the great concerns over the coronavirus wave, Abbas said he is encouraging Gaza residents to get vaccinated.

The Ministry of Endowments and Religious Affairs, in cooperation with the Ministry of Health, launched a vaccination campaign in July for mosque-goers in the Gaza Strip against the coronavirus, as there are fears among the residents of Gaza about getting the vaccine.

Some 336,300 vaccine doses have reached the Gaza Strip so far, hence the increasing concerns over the virus spread.

Mohammed Fathi, 34, received the vaccine from the mosque near his home in Gaza City's Tel el-Hawa neighborhood.

“I got infected during the first wave and was previously afraid of the side effects of the vaccination. But I think we are on the cusp of a new wave, and the hospitals cannot bear the pressure so I decided to get the vaccine to relieve the severe symptoms that I may experience,” he told Al-Monitor.