The Egyptian Coptic Orthodox Church is on the defensive after tiles were placed over the traditional flooring at a historic monastery in Assiut governorate. 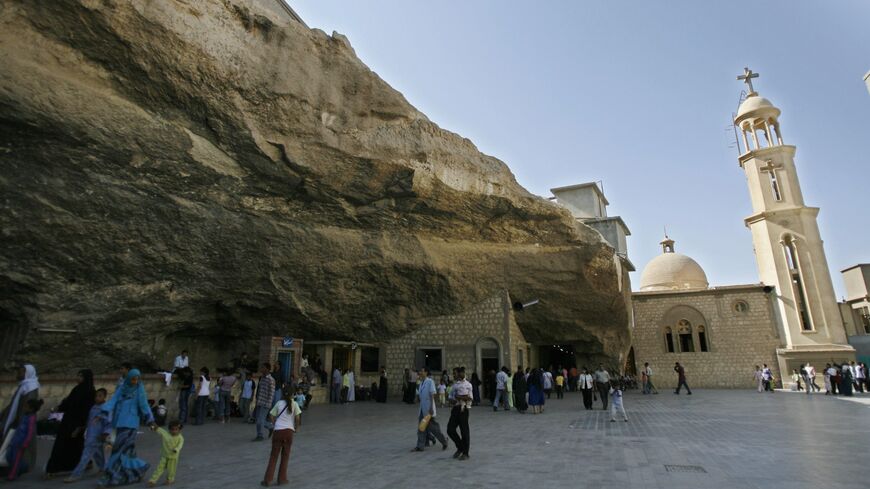 Egyptians attend Coptic celebrations for the Feast of Assumption, marking the Virgin Mary's ascension into heaven, on Aug. 20, 2007, at the Virgin Mary Monastery in Dronka village in Assiut governorate, 400 kilometers (250 miles) south of Cairo. - KHALED DESOUKI/AFP via Getty Images

CAIRO —– The restoration in southern Egypt of the Virgin Mary Monastery, located at a place where the holy family may have spent its last days in Egypt before returning to Palestine more than 2,000 years ago, is causing a stir.

The Virgin Mary Monastery in Dronka in Assiut governorate is said to have been built where Mary, Joseph and the infant Jesus spent time before boarding a boat on the Nile River and returning to their homeland.

Tradition says the holy family stayed in a cave in Western Assiut Mountain after fleeing to Egypt following Jesus' birth in Bethlehem. The cave now houses the Chapel of the Virgin Mary.

The monastery and the chapel underwent a comprehensive remodeling a year ago as part of Egypt's plans to revive the Holy Family Trail and breathe new life into Egypt's tourism sector.

The restoration work on the monastery and the chapel was recently completed, and both were reopened by Coptic Orthodox Church priests Aug. 1.

A shock, however, was in store: The floor of the chapel has been covered with ceramic tiles. This, detractors of the restoration say, has concealed the original rocks of the mountain into which the cave was dug.

There were angry reactions to photos and videos resulting from the opening ceremony of the monastery and the chapel.

"I saw terrifying photos of the sanctuary of the Monastery of the Virgin Mary in Assiut after its remodeling," one man tweeted. "I could not believe my eyes. I hope the photos are untrue."

Renowned novelist Ibrahim Abdel Meguid wrote about his visit to the cave in 1995, saying he spent a day inside the chapel. "The place buzzes with history and sanctity," Abdel Meguid wrote. "You cannot cover its original floor with ceramic tiles."

The Virgin Mary Monastery in Dronka is one of the oldest such structures still operational in Egypt.

It is said to have been built over 1,500 years ago. Nevertheless, the monastery's chapel is said to date to the first century. Some believe the cave was used for the storage of grains by Joseph.

The desert monastery on the Nile about 20 kilometers (12 miles) from the city of Assiut is around 100 meters (330 feet) above sea level, which was why southern Egyptians used to seek refuge there when the river flooded.

Egyptians of all stripes flock to the chapel year-round, but especially in June, when the visit of the holy family is celebrated.

The celebrations start June 13 and last for 15 days. As they ascend the mountain on the road to the chapel, many pilgrims recall all that is sacred about the place.

But some wonder about this now. "The restoration has taken the chapel totally out of the context of its history and place," leading Egyptologist Bassam al-Shamaa told Al-Monitor. "It should have preserved its ancient features, not throw away its historical identity."

Egypt is investing heavily in reviving what is said to have been the route of the holy family. In doing so, it is capitalizing on the presence of a long list of sites said to have been visited by Joseph, Mary and Jesus when they fled to Egypt to escape King Herod the Great. While the Gospel of Matthew briefly mentions the flight into Egypt, it does do not go into detail about where the family had been. New Testament apocrypha do go into more detail, however.

The plan to revive the Holy Family Trail includes the restoration of 25 sites in all parts of Egypt, from Sinai in the northeast to Assiut.

The sites include churches, monasteries, towns and water wells. The restoration of some of the sites has already been completed.

Behind this investment are Egypt's hopes to use these sites to attract more foreign tourists and breathe new life into its tourism sector.

The sector contributes around 11.9% of Egypt's gross domestic product and employs 9.5% of the total national workforce of around 27 million.

The tourism sector received a painful blow in late 2015 when a Russian passenger plane was blown up by a bomb over Sinai shortly after takeoff from Sharm el-Sheikh; it had been headed to St. Petersburg in western Russia.

The downing precipitated a series of flight bans to Egyptian destinations.

The tourism sector received another blow early last year because of the COVID-19 pandemic and the recession that hit international travel activities.

In March 2020, Egyptian Tourism Minister Khaled al-Anani said the suspension of international flights to Egypt because of the pandemic would deprive his country of $1 billion in revenues each month.

"Egypt pins a lot of hope on the Holy Family Trail, which is why all state authorities pay huge attention to this file," independent tourism expert Magdi Selim told Al-Monitor. "We expect the revival of the trail to attract a large number of foreign tourists to sites visited by the holy family."

Egypt, whose Christian minority makes up almost 10% of the population of 101 million, boasts a large number of churches and monasteries, some of them nearly as old as the Christian faith itself.

There also have been restoration issues at historic sites other than the Virgin Mary Monastery.

The restoration of a historical palace in eastern Cairo brought public wrath on the Ministry of Antiquities two years ago. The marble and the materials used in the restoration of the Baron Palace, some archeologists said, were of poor quality and not in keeping with the original style of the place.

And in 2015, some Egyptian Museum experts used beeswax to reattach King Tutankhamun beard to its golden burial mask.

The remodeling of the Virgin Mary Monastery and chapel was multifaceted. The lighting system of the chapel was modernized and the place was provided with better ventilation.

An air-conditioning system was introduced to the chapel for the first time. The old wooden pews of the chapel were replaced with new plastic chairs.

The Coptic Orthodox Church says these changes were necessary to make the place more comfortable for the thousands of people who visit it every year.

"We were very keen to preserve the ancient nature of the sanctuary," Father Youaness Tawfik, the bishop of Assiut, told Al-Monitor. "We only wanted to provide those visiting the place with comfort."