Cairo has completed work on the first stops on the Holy Family Trail, a path connecting locations believed to have been visited by the Holy Family 2,000 years ago while fleeing King Herod’s soldiers. 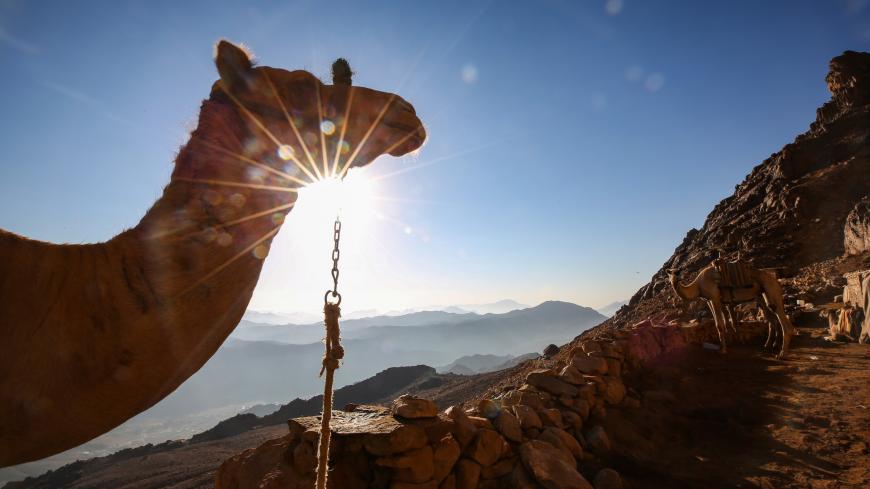 This picture taken Oct. 19, 2018, shows camels belonging to Sinai bedouins waiting along the footpath leading down from atop Mount Catherine, above the 6th-century Greek Orthodox Christian monastery of Saint Catherine and near the Egyptian town of the same name in the south of the Sinai peninsula. - SALLY KANDIL/AFP via Getty Images

Marking the occasion of Egyptian Copts' traditional January Christmas celebrations on Jan. 5, the country’s Ministry of Tourism and Antiquities ceremoniously opened the first stop on its much-anticipated Holy Family Trail, a long-distance route tracing the locations thought to be visited by Jesus, Mary and Joseph 2,000 years ago during their flight into Egypt. The project has been under development since 2013 and is now ready for visits by international tourists.

The stop is located in Samannoud, a small city in Gharbeya governorate where according to the Virgin Mary is believed to have prepared bread and Jesus to have blessed bread for a local woman. The development works in Samannoud included the conservation and enhancement of St. Abba Noub Church, the surrounding landscape and a nearby square and commercial area. Signposts provide information about the history of the place, its location along the trail and different Christian points of interest.

“The rest of the stops on the trail will be opened during this month,” said Adel Gendy, national coordinator for the trail project and the general manager for international relations and strategic planning at the government-affiliated Tourism Development Authority. Gendy told Al-Monitor, “The main target of this phase was the development of the infrastructure and the facilities for all the sites to be available to international tourists,” he added.

The Holy Family Trail runs through 11 Egyptian governorates that, according to the tradition of the Coptic Orthodox Church, witnessed their journey in Egypt, starting in North Sinai and heading south to Asyut. Many of the places where the Holy Family is said to have stayed have become churches and monasteries. Gendy says that the 3,500-kilometer (2,175-mile) trail is the world’s longest pilgrimage route in a single country.

One of the most important stops along the trail is Al Muharraq monastery in Asyut, one of the world’s oldest operational monasteries. Al Muharraq was built on the spot where the Holy Family is thought to have settled for more than six Coptic months, their longest stay during their journey in Egypt. Other significant stops are located in Cairo, where the stops are most developed, and the monasteries of Wadi El Natrun in Beheira.

The Holy Family Trail is being developed in cooperation with the Ministry of Culture, which handles educational materials for the route, and the Ministry for Local Development, charged with facilitating coordination among the governorates included in the trail. Gendy said that 25% of the cost of the project is expected to be paid with public funds, while the other 75% should come from the private sector and nongovernmental organizations, which next month will be presented with the an investment plan prepared by the TDA. The minister of tourism and antiquities, Khaled El-Enany, stated that the ministry has allocated 60 million Egyptian pounds ($3.8 million) for the development of the stops on the trail, Al-Ahram reported.

“For Egypt, [the Holy Family Trail] is a very good opportunity to diversify its tourism products. Cultural and religious tourism in Egypt have a lot of potential,” said Nader Guirguis, a former member of the committee in charge of developing the trail and vice president of the tourist agency Holy Egypt International. He told Al-Monitor, “The price of the package of religious tourism is up to four times that of the beach tourism, which is very cheap and all-inclusive,” he added.

Along with the development of each of the trail’s 25 stops, the development works also include the design of a logo and the installation of traffic signs leading visitors to the sites as well as entry and exit gates, which have built using local materials. A publicity campaign has targeted the Vatican authorities, international tour operators and the heads of churches abroad, Gendy said.

“Now that the international community knows that Egypt is working hard to launch this project, we decided to open the 25 stopping points,” Gendy explained. He said that initially the ministry thought it would be necessary to combine it with another, well-known product, such as Nile cruises or rural tourism in the Nile Delta. “That was the philosophy,” he added, noting that the ministry will still try to maximize the benefits of featuring different products along the trail.

The main goal of the Holy Family Trail is to boost spiritual tourism in Egypt, especially among Christian pilgrims, but the project also aims to support local communities along the trail by creating economic opportunities. The Ministry of Tourism and Antiquities has conducted training courses for local communities on how to accommodate visitors.

The Ministry of Local Development “contributed to the trail by assisting the Ministry of Tourism in rehabilitating the 25 recognized sites," said Mohamed Higazy, a former ambassador and current adviser to the minister of local development for international cooperation. He told Al-Monitor, "We developed a plan through which we assisted the eight governorates involved financially by channelling funds from the Ministry of Tourism and involving technical teams supervised by the governors who gave all of their attention" to the project.

In the future, Gendy said, the focus will be on maintenance and further development of the services and infrastructure along the trail. The Ministry is considering establishing a national administrative entity responsible for providing services and facilities, maintaining the infrastructure and monitoring use.

“We are waiting for this pandemic to finish,” Gendy said. “But meanwhile, what we are doing is developing the infrastructure so that it is ready. The competition will be very wild, and we have to be ready,” he concluded.