Entities in both Qatar and Italy praised high jumpers Mutaz Barshim and Gianmarco Tamberi for opting to share an Olympic gold medal, though one commentator said such a deal was unbecoming of elite athletes. 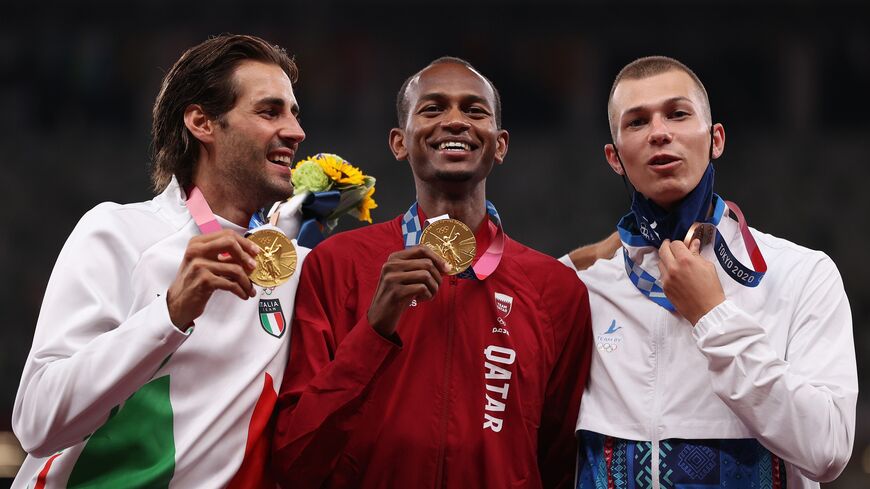 Joint gold medalists Gianmarco Tamberi (L) of Italy and Mutaz Essa Barshim (C) of Qatar and bronze medalist Maksim Nedasekau of Belarus (R) celebrate on the podium during the medal ceremony for the men's high jump at the Tokyo 2020 Olympic Games at Olympic Stadium on Aug. 2, 2021, in Tokyo. - Patrick Smith/Getty Images

A Qatari athlete and an Italian one are being praised for agreeing to share a gold medal at the Olympics.

On Sunday, Qatar’s Mutaz Barshim, 30, and Italy’s Gianmarco Tamberi, 29, competed in the men’s high jump at the 2020 Olympics in Tokyo. After both had cleared 2.37 meters (7.78 feet) without having any failed jumps in the competition, each was unable to clear the 2.39-meter (7.84-foot) mark in three attempts. An Olympic official then offered them a “jump-off” to decide the gold medal winner. When Barshim, who won the silver medal at the 2016 Olympics, asked if they could both win gold, the official agreed, media reported.

Entities from both countries heaped praise on the two athletes for sharing the gold medal. The Doha Debates program, which is owned by the Qatar Foundation, called the event a “moment of magic” and a “giant leap for sportsmanship” in a Monday Instagram post. The day before, the Italian Embassy in Doha, in a tweet, congratulated Barshim and Tamberi for “the joy of winning together.”

Not all sports commentators agreed, though. Australian rules football writer Jake Niall said the deal between the athletes was “utterly at odds with the concept of elite sport” in an article in the Sydney Morning Herald.