The recognition and congratulations by Israeli Jewish politicians over the achievement of swimmer Iyad Shalabi reflect societal changes that were long overdue. 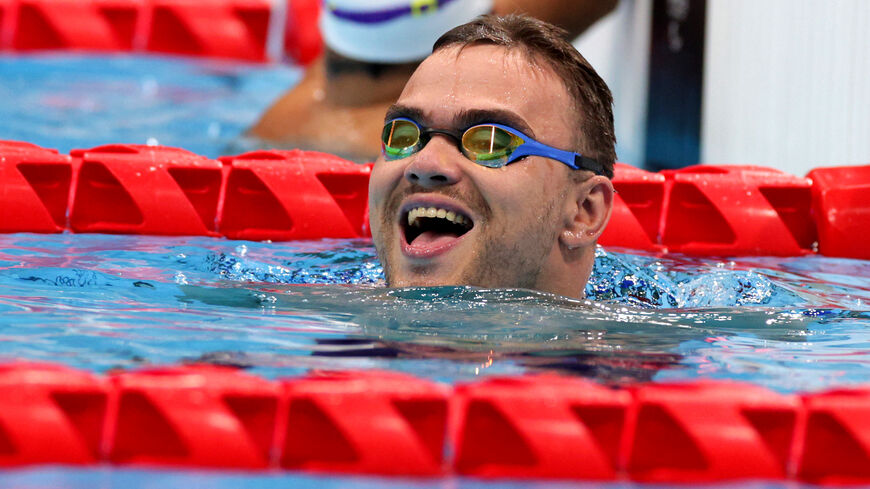 Two weeks after the Olympics ended, the Paralympic Games got off to an incredible start for the Israeli delegation to Tokyo. Israeli Arab swimmer Iyad Shalabi won gold in the men’s 100-meter backstroke in the S1 category (tetraplegia or severe coordination problems with all four limbs) on the very first day of the games. Shalabi beat silver medalist Anton Kol of Ukraine by just 0.25 seconds.

Shalabi, who hails from the Arab town of Shfaram, was born deaf. Then, at the age of 13, his lower body was paralyzed in an accident. His win was not only the first medal for Israel in the current games, but also the first gold medal in swimming for Israel since the Athens Games in 2004, when Keren Leibovitch also won gold on the 100-meter backstroke. The last Israeli to win gold at the Paralympics in any other sport was Noam Gershoni, who won in tennis in London in 2012.

As of the writing of these lines, Israel has won four medals at the Tokyo Paralympic Games. In addition to Shalabi, other medalists include Mark Malyar, Ami Dadaon, and Moran Samuel. Nevertheless, everyone agrees that Shalabi’s win was historic. He was the first Arab to win a personal medal in the Olympics or Paralympics as part of the Israeli team.

The Tokyo Games mark Shalabi’s fourth appearance at Paralympic competitions, but it is the first time he made it to the podium by coming in first. In Beijing 2008 and London 2012, he may not have made it all the way, but was as close as possible, coming in fourth. People were ecstatic in his hometown of Shfaram about the medal, but also in the Arab society and the entire country. His name came up just about everywhere in the Israeli media, and he was congratulated by politicians from across the political spectrum.

President Isaac Herzog tweeted, “Iyad Shalabi, you’re a champ!” Prime Minister Naftali Bennett called him and fellow gold medalist Mark Malyar, “Our world champions!” These leaders were joined by both Jewish and Arab Knesset members and ministers. Opposition leader Benjamin Netanyahu also joined the chorus of well-wishers, saluting Shalabi in a tweet, saying, “Iyad Shalabi, you are golden! I salute you for your enormous achievement.”

That’s the secret behind what Shalabi did. It was actually a double achievement. In addition to his historic win of a gold medal, he also managed to cause Jewish politicians who would otherwise be silent on achievements of Israeli Arabs to congratulate him as well. Chief among them, of course, was former Prime Minister Netanyahu. People still remember how, when Netanyahu was prime minister, he tended to “ignore” the achievements of Arab athletes, and called only Jewish athletes to congratulate them. This left a bitter taste in the Arab sector in general and Arab athletes in particular. They were frustrated.

The most prominent example of this was the case of Amir Assad from the town of Jatt, who won the European championship in kickboxing in 2018 and the world championship the following year. Yet despite his impressive achievements on behalf of Israel, not a single Jewish politician called to congratulate him. What this indicates is that Israeli society has undergone significant change with Shalabi’s gold medal win.

Reflecting on what happened to him, Assad told Al-Monitor, “Maybe the reason I didn’t get any calls or congratulations from politicians is because kickboxing was only recognized as an Olympic sport a few months ago, and will only be part of the Olympic Games in 2024. Apart from the Kickboxing Federation and Ayelet [Israeli Federation for Non-Olympic Sports], I received no support whatsoever from official state institutions or even my local municipal council. I didn’t get as much as a good word from them.”

Asked about the flood of congratulations that Shalabi is now receiving, he said, “I’m not sitting and waiting for politicians to compliment and support me. What I want most of all is to prove myself, so that I can promote the Arab society’s reputation. Nevertheless, it would certainly be better if they recognized my achievements in some way or other.”

Meanwhile, it looks like Shalabi’s gold medal instigated a new spirit of change, not only among politicians, but in Israel’s Social Security authority too. It turns out that Shalabi’s father lost his guaranteed minimal income for accompanying his son to international competitions, because the law bans payment to citizens who “fly overseas on a regular basis.” Now, the general manager of Social Security ordered that the swimmer’s father be paid back all the money he was denied while accompanying his son to competitions overseas. This can be attributed to Shalabi’s remarkable win, but also to the extensive coverage that this tendentious issue received in the media.