Palestinian fitness instructor hopes to make it to the 2016 Summer Olympic Games, despite discouragement from the Palestinian Olympic Committee. 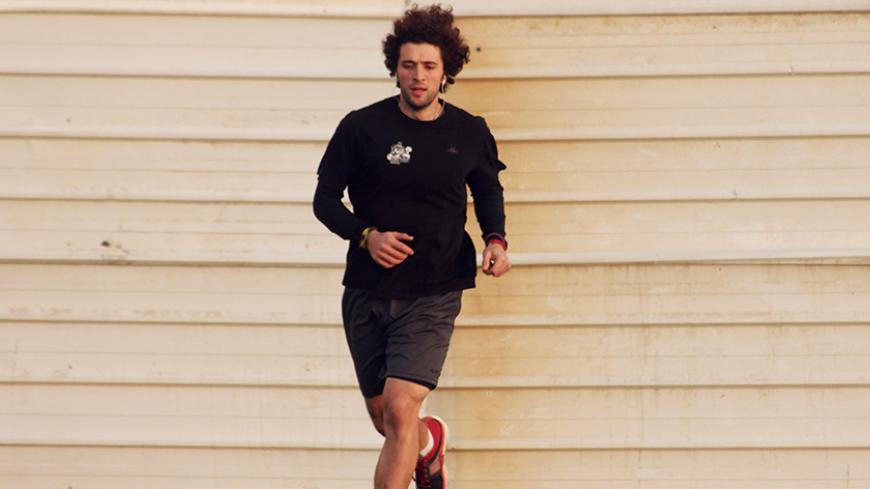 RAMALLAH, West Bank — Munching on dates for energy, 25-year-old Mohamed al-Khatib starts his morning at sunrise, hoping for an opportunity to use a track field at a local high school in Ramallah.

Khatib is a yoga and fitness instructor who is training for a chance to attend the 2016 Olympic Games in Brazil and race in the 100-meter and 200-meter track and field events.

In order to get access to the track, Khatib must ask the school’s security guard for the keys. But the guard doesn’t always permit him to use the track, particularly on school days.

With the games just nine months away, running Aug. 5-21, 2016, and no access to proper Olympic training or official qualifying races in Palestine, Khatib told Al-Monitor he plans to train in the United States.

“The plan is still in process, [but] I am going to Houston in Texas to train for three months. Hopefully this will be the first step to being qualified,” he explained.

However, he will have to raise nearly $10,000 for his training. Khatib and his friends are putting a video together in order to launch a crowdfunding campaign to raise his funds. They plan to launch the campaign on the Indiegogo website the first week of December, and he hopes he is able to leave for the United States in January.

Khatib is no stranger to overcoming challenges. He grew up in Hebron, in the southern part of the West Bank, one of the most volatile areas in the Israeli-Palestinian conflict.

“At a young age, I saw my dad get harassed by [Israeli] soldiers. I remember seeing soldiers daily, searching our house; they would put us in one room. I didn’t understand what was happening, I was 5,” he said.

When the second Palestinian intifada began in late 2000, Khatib was 10. “The Israelis had checkpoints everywhere in the city,” he explained. The conflict lasted five years.

At age 16, Khatib spent a year in the United States as a foreign exchange student in Washington state, at Sammamish High School, in the city of Bellevue. He started running while playing sports, including American football as a wide receiver. But it wasn’t until the 2012 Summer Olympics, held in London, that he took interest in participating in the Olympic Games. “It was a Lithuanian swimmer. She was 15 years old and she had won a gold medal, and I thought, if she can win an Olympic medal, what’s stopping me? What’s stopping anyone from any medal?” he asked.

Lithuania won its first gold medal when Ruta Meilutyte won in the women's 100-meter breaststroke. Her win inspired Khatib. Then when Mohammed Assaf, a Palestinian singer from Gaza, won the singing competition Arab Idol in 2013, Khatib decided to start training. “Imagine a Palestinian winning on an international level at the Olympics,” he said. “A month later, I was on YouTube, checking [out] sprinting workouts.”

Without previous experience and running on Birzeit University’s asphalt track, he admitted he didn’t know what he was doing. “I was such a mess, I didn’t know anything about running,” he said about his first day out. “The next two days, I stayed in bed because my legs hurt so much.”

In February 2014, Khatib visited friends in Texas and met Crystal Dunlap, a US certified track and field coach. Dunlap told Al-Monitor that when she first met Khatib and realized he didn’t have a coach, she wanted to help.

“My heart is [set] to help people accomplish dreams and goals. He didn't have much of an outlet. It's hard [to train] when you're by yourself — you don't have someone pushing you,” Dunlap said.

After Khatib left the United States, Dunlap sent him training workouts through email, social media and by phone. Dunlap was able to offer Khatib further guidance when she moved to Jerusalem late last year.

She said, “His progress has been huge. He’s so disciplined. Runners in the [United] States start running at 5 or 6 years old; it’s taken for granted. He wakes up and thinks, ‘Am I going to be allowed on the track today?’”

But challenges also lie ahead with the Palestinian Olympic Committee (POC). “The biggest thing we've run into is that they want to see a digital time, but there are no digital timers,” said Dunlap. All the meets are done with a guy and a stopwatch. I don't know how much the committee understands about track and field.”

Olympic times for track and field athletes are timed on a digital timer. They use starting blocks and race on a track that is made from synthetic rubber called Tartan, for which they use spiked shoes to run the track. The POC does not provide athletes with adequate training tools for its athletes, and they have chosen athletes in the past who did not have qualifying scores. Instead, they chose wild card athletes to attend the last five Summer Olympic Games. In 2012, only one person competing in judo was a qualified athlete, according to International Olympic Committee standards.

Khatib said he has gone to the POC four times since 2013, and each time they told him he would never make it, that making the Olympics required “good genetics” and a qualifying time, but he never let it discourage him. He said, “They’d break me for a second, but as soon as I left, I’d say, ‘No, God is bigger. If it is genetics, he can make me do it. And I’m not going to go back there until I have a [qualifying time]. They want to talk numbers, then I’ll give them a number.’”

Al-Monitor reached out to the POC for comment. Their International Relations office said, “It could be possible to participate by qualifying score and time; however, we suffer from lack of means and equipment. The POC is working hard on changing that. We have been promised by the International Olympic Committee that [they] will provide us with all necessary facilitation to establish the track field in Palestine very soon.”

The POC did not offer further details but did say eight athletes will be chosen for the 2016 Olympic Games.

Meanwhile, Khatib presses on in his training, because making it to the Olympics is more than just a personal goal, but a mandate he feels for his life and the Palestinian people.

“One of the things I notice is that we [Palestinians] tell ourselves that we’re never going to make it because … we’re Arabs or because we’re Muslims or because we’re under occupation. I hear this a lot from Palestinians in the streets. This doesn’t make sense. No, I’m going to prove we can achieve. It’s hope. Let’s not suppress our energy and keep recycling the same society; let’s build heaven out of Palestine,” he said.

He concluded by saying that if he does obtain the coveted privilege of attending the Olympics, he prays for a chance to win gold — just to hear his national anthem.