COVID-19 tests and vaccines will be administered to Afghan evacuees who don't immediately depart for other flights, the Qatari Foreign Ministry has said. 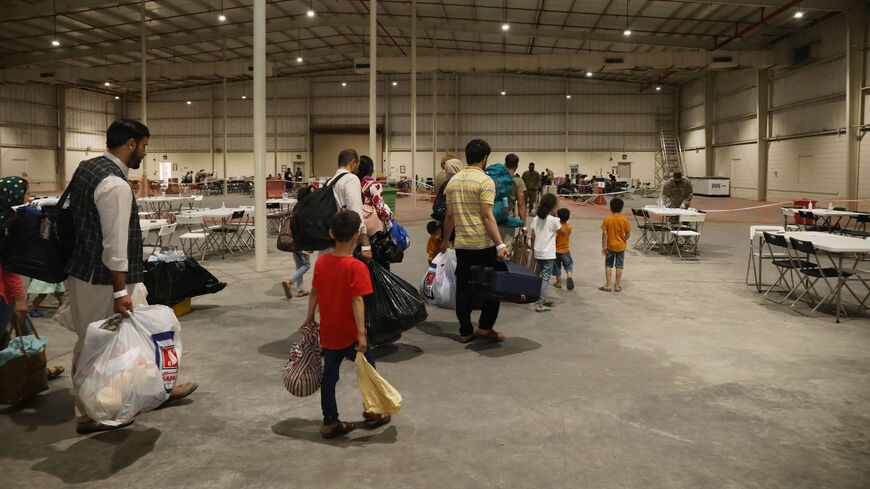 In this handout image, Afghan evacuees walk through the in-processing building Aug. 20, 2021 at Camp As Sayliyah, Qatar. - Sgt. Jimmie Baker / US Army via Getty Images

Qatar will provide coronavirus vaccines to Afghan evacuees staying in temporary housing, the Foreign Ministry said Thursday, as the window closes on the US-led evacuation effort from the Taliban-run country.

The Gulf state has so far facilitated the evacuation of more than 40,000 people from Kabul, the Foreign Ministry said Thursday. Qatar is currently hosting “a large number of evacuees, most of them students, families and journalists,” the ministry said, adding that evacuation efforts will continue “in the coming days.”

Since the Taliban takeover of Afghanistan, the United States has been using Al Udeid Air Base as a transit hub for military evacuation flights. Southwest of Doha, Al Udeid is the largest US military base in the region.

Qatar said Thursday it will provide evacuees who do not immediately depart the country with a PCR test or a COVID-19 vaccine on request. Doha News reports that more than 500 Afghans have been moved to temporary housing at a compound in Qatar that has a health center on site.

The wealthy Gulf state has one of the world’s highest vaccination rates, with 81% of its total population having received at least one dose. This week, the Qatari Health Ministry announced that it had approved a third dose of the Pfizer-BioNTech and Moderna vaccines for immunocompromised individuals.

The vaccination announcement comes as the Pentagon says it’s working to improve dire conditions at the US airbase. In recent days, photos and videos emerged showing Afghan evacuees held in unsanitary and overcrowded conditions.

In emails leaked to Axios, US Central Command official Colin Sullivan describes Al Udeid as a “living hell” for the Afghans housed at the base, where “trash, urine, fecal matter, spilled liquids and vomit cover the floors.”

Some 13,400 people were evacuated from Afghanistan between early Wednesday morning and early Thursday morning, roughly 5,100 of them on US military flights, the White House said.

The Biden administration says the United States has evacuated some 95,700 people since Aug. 14, the day before Kabul fell to the Taliban.