The two-day visit in Rabat of Foreign Minister Yair Lapid is not only historic diplomatically, it also cements growing trade relations between the two countries. 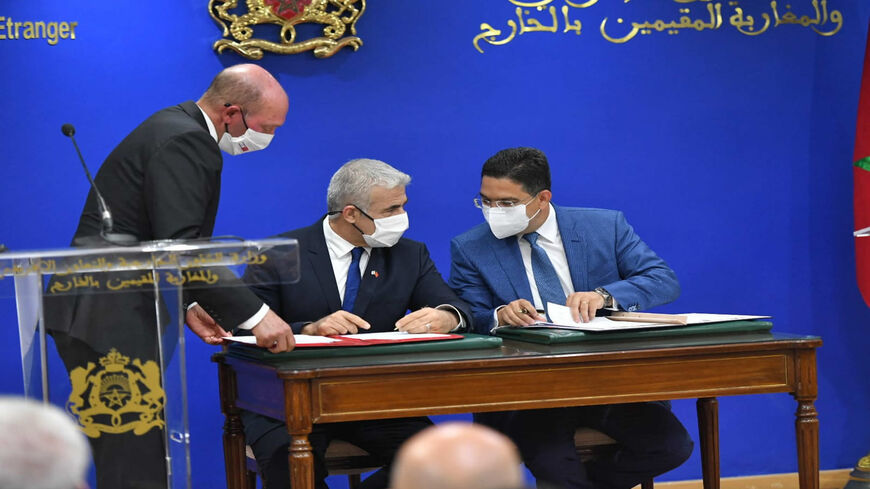 The prime minister of Morocco, Saadeddine El Othmani, of the Islamic Justice and Development Party, refused to meet with Lapid. This party did not support the renewal of relations with Israel, a move that King Mohammed VI advanced with the support of only part of his government.

Despite this refusal, Israelis see Lapid’s visit to Morocco as historic. The Israeli delegation is enjoying a warm welcome; those among them with Moroccan origins are especially moved. But the visit is not just symbolic diplomatically, it is part of the great upswing in economic and commercial ties between the two nations. Perhaps it doesn’t match the enormous extent of commerce with the United Arab Emirates, but the intent in both Israel and Morocco now, since the new Israeli government was formed, is to quickly advance infrastructure for commerce, as attested by several agreements that have already been signed and several on the way. According to an Israeli diplomatic source who spoke to Al-Monitor on condition of anonymity, if there are no obstacles or surprises, Morocco is expected to announce it will raise the level of its diplomatic representation in Israel to an embassy, most likely to mark a year to the signing of the normalization agreement.

On Aug. 11, Lapid and Bourita signed in Rabat three cooperation agreements, including a diplomatic agreement between the foreign ministries and agreements in the fields of culture, sports, aviation and tourism.

After the signing of the agreements, Bourita addressed the two delegations. He spoke of all the benefits Morocco can expect from the agreement, including cooperation with Israel on economic and commercial issues, development of agricultural technology and the use of water. But Bourita also had addressed the Palestinian issue, emphasizing more than once the need to reach peace between Israel and the Palestinians, in the framework of which a Palestinian state would be created, while Israel remains within the 1967 borders. This is the only solution that will lead to a just, real and sustainable peace, he said.

Addressing the delegations after Bourita, Lapid said, “Something is happening in the region. People and leaders look at the likes of Libya, Syria and Lebanon, and say to themselves: 'This is not what we want for our children. The only wars worth dedicating our lives to are not against our neighbors, nor against people who pray differently from us. The only wars that have any meaning are those against poverty, against ignorance, against pandemics and sickness. The Holy Quran says, 'If they lean toward peace, you too should lean toward it' [Sura 8, verse 61].’”

Here is one of the interesting aspects of the strengthening of ties between the nations. On July 17, Morocco and Israel signed an agreement for cooperation in the field of cyberdefense. This is the first agreement in the cyber field between the two nations since relations were established. The agreement was signed this week in Rabat between the director general of the National Cyber Directorate, Yigal Unna, and his Moroccan counterpart, Gen. Moustafa Alrabii. It establishes cooperation in the fields of operation, research and development, defense information sharing, and more. The agreement was attained with the close involvement of the Israeli Defense Ministry. Hence, Israel will help Morocco develop its cyberdefenses, both against other nations and intelligence agencies, and against business espionage and digital crime.

What’s interesting is that alongside the signing of the cyberagreement, international news agencies reported that the Moroccan security forces apparently used the NSO tracking software to track cellphones of opponents of the regime — and according to the reports, to track the cellphone of French President Emmanuel Macron. Morocco denied it, and a senior Israeli source said the agreement signed has no connection to this report, since the agreement deals with entirely different fields.

The normalization agreement that was signed with Morocco in the framework of the series of Abraham Accords initiated by former Prime Minister Benjamin Netanyahu brought a real increase in Israeli exports to Morocco, despite the coronavirus pandemic and the political crisis in Israel. According to data of the Federation of Israeli Chambers of Commerce, in the first half of 2021, the export of goods to Morocco from Israel reached $13.2 million, compared to $8.1 million in the same period last year. In all of 2019, exports to Morocco totaled only $4 million, and Moroccan imports to Israel in the same period totaled $6 million, similar to that in the same period last year ($5.9 million). These data don’t include the service sector, including tourism.

These numbers are not big in Israeli terms, but according to the estimates of the Israel Export Institute, the potential for exports to Morocco stands at no less than $250 million a year, mostly in inputs for agriculture, water treatment, digitization and smart industries — cyber and civil defense, digital health systems and smart city systems. The field of green energy is seeing big growth in light of the goal of moving more than half of energy use to clean energy, mostly solar, by the end of the decade.

The tourism industry is considered one of the leading sectors in the nations’ economic relations. Before the coronavirus pandemic, close to 50,000 Israeli tourists visited Morocco every year, compared to 80,000 tourists from China, for instance. The launch of direct flights and the easing of visa requirements were supposed to increase these numbers, of course, if and when the pandemic wanes.

On the diplomatic/political side of bilateral relations, the picture is a mixed one. We have already mentioned the refusal of the Moroccan prime minister to meet with Lapid during his visit to Morocco. In fact, after the end of Operation Guardian of the Walls against the Gaza Strip in May, he invited Hamas' political bureau chief Ismail Haniyeh to Morocco, and praised the “achievements” of the group in the fight against Israel. Also, during the recent Gaza conflict, a virtual meeting was canceled — a webinar of the Federation of Chambers of Commerce with hundreds of businessmen from Morocco — because of the diplomatic sensitivity.

On the other hand, defense ties between the countries are tightening, and on July 4 a Moroccan air force cargo plane landed at the Israeli air base at Hazor, to participate in a military exercise with the Israel Defense Forces and other militaries. Morocco also helped Israel join the African Union as an observer.

The most important figure in these developing bilateral relations is King Mohammed, who reportedly sees in relations with Israel an important strategic goal, because of its economic aspects and the expected benefit to the Moroccan economy through a potential jump in commercial and business connections with Israel.