The Iraqi government launched a campaign to remove encroachments in Iraq, which is more likely to anger political parties and armed groups whose huge influence has allowed their supporters to encroach on state-owned land. 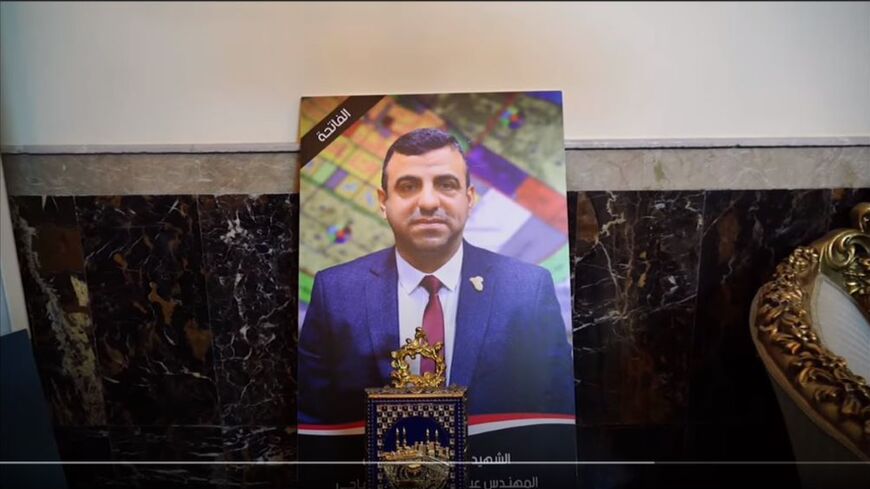 Karbala Mayor Abeer Salim al-Khafaji was killed Aug. 12 when he was trying to enforce government rules against improper use of public property. In November, a Basra official in charge of removing encroachments on public property also was killed. - YouTube/Media Office of Prime Minister Mustafa al-Kadhimi

The Baghdad Operations Command was tasked Aug. 12 with protecting the Baghdad municipal team, which has been carrying out a major campaign to remove all encroachments on public property, roads and streets. These encroachments include buildings, walls and steps.

The government’s Security Media Cell said in a press statement, “These encroachments have caused harm to citizens and impeded their movement in many vital parts in the capital, Baghdad. The campaign was launched on the directive of Prime Minister Mustafa al-Kadhimi.”

This campaign came a day after Kadhimi’s visit to Karbala province in support of the municipality’s campaign to remove encroachments on state-owned lands. Such abuses increased significantly due to political parties and armed groups’ support.

A few hours prior to the visit, a citizen encroaching on state-owned land was seen killing Karbala Mayor Abeer Salim al-Khafaji, who had led a campaign to remove encroachments. The killing was recorded on a video (which YouTube has removed for violating its "policy on violent or graphic content").

This is not the first time that citizens have used weapons against municipal officials or employees tasked with removing the encroachments. On Nov. 27, the official in charge of removing encroachments in Basra, Makki al-Tamimi, was killed as a result of campaign to stop such violations. The many such cases involving violence regard have prompted some employees to request to be exempted from such tasks.

The media reported that the person seen killing Khafaji is a member of the Islamic Dawa Party led by former Prime Minister Nouri al-Maliki, and that the person's influence apparently allowed him to seize and hold onto a plot of state land for almost 15 years.

Kadhimi met the person, whom he described as a “criminal.” The prime minister told the man at the spot of the killing, “You made us lose a righteous son. The project to remove encroachments will continue. You obtained the land plot with the assistance of corrupt people, because you are an employee in the Karbala Provincial Council,” in reference to the influential Islamic Dawa Party in Karbala, the stronghold of Maliki and his family.

Political commentator Najm al-Qassab told Al-Monitor, “The campaign to remove abuses and encroachments is a step on the right path which the previous governments should have taken.”

He added, “Removing encroachments would well-establish [respect for] the law among the people. That is in fact what the citizens want." He said the property losses Iraqi governments have suffered due to such abuses is in the billions of dollars.

Significant takeovers of and encroachments onto public land have been taking place in Iraq since 2003. Political parties and militias, and individual supporters protected by political and armed groups, have taken control of such properties. Some of these violations have become a fait accompli even when those involved don't have the force of arms behind them.

Such property began to be seized following the fall of the Saddam Hussein regime in 2003. Not all governments have been able to stop this phenomenon. Some of the transgressors are wealthy, including the man seen killing the mayor.

An official in Kadhimi’s office told Al-Monitor, “Kadhimi has taken a strict decision to remove encroachments. Although he is well aware that this matter will cause him a lot of political problems, he took this step.”

As a result of the encroachments, sidewalks, streets and other public spaces often look ugly and disorganized.  The population growth and the large-scale control that armed parties and groups enjoy have increased and widened these abuses.

Removing encroachments will not be an easy task. Some say it may be no less dangerous than limiting weapons to the hands of the state.

Citizens who have encroached on property have always clashed with the security forces that accompany the team in charge of removing these abuses. These teams refused to enforce any campaign of this kind unless they were accompanied by security forces. They know very well that their task is not easy.

Qassab said, “The campaign to remove abuses and encroachments is a step on the right path which the previous governments should have taken.”

He added, “Removing encroachments would well-establish [respect for] the law among the people. That is in fact what the citizens want. These abuses are estimated at more than $25 billion.”

Videos showing stones being thrown at security forces in Karbala a year ago demonstrate that such campaigns are hard to be implemented.

The mayor’s killing was the spark that ignited a Cabinet “revolution” to remove encroachments on state-owned land. On Aug. 12, the province of Karbala launched a campaign named after the slain mayor, The Martyr Abeer al-Khafaji Campaign, to remove encroachments. The municipal team is backed by security reinforcements.

Baghdad Mayor Alaa Maan told official television Aug. 11, “Kadhimi’s visit to Karbala has been an incentive for the municipality’s directors to implement the law. The law must be enforced in a strict way to end encroachments.”

Some encroachments have become a fait accompli in Baghdad and other provinces, especially in the southern parts of the country where tribes are in control. The tribes could constitute a new challenge to Kadhimi’s campaign, which has begun to be implemented; the tribes also could impair efforts to control weapons, hold free and fair elections, halt assassinations and resolve the US-Iran conflict in Iraq.

At the same time, the anti-encroachments campaign also could be a first step by the Iraqi state to consolidate its presence at the popular level.