Iran's Islamic Revolutionary Guard Corps has warned of a "destructive" response to any attack. 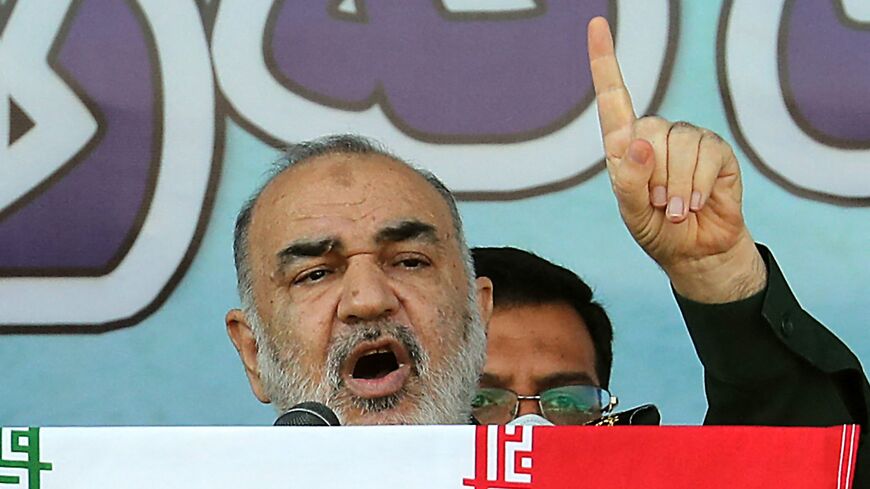 As accusations continue to swirl against Tehran about a drone strike that killed two on an Israeli-linked tanker, the head of Iran's Islamic Revolutionary Guard Corps, Hossein Salami, said Aug. 4 that Iran would respond to any attack against it. Here, he delivers a speech in Tehran's Palestine Square on May 19, 2021, during an event condemning then-ongoing Israeli airstrikes on the Gaza Strip. - AFP via Getty Images

After Israel, the United States and the UK blamed Iran for an attack on an Israeli-linked ship in the Persian Gulf and vowed a “coordinated response,” the Islamic Revolutionary Guard Corps has threatened to respond to any retaliatory strike.

IRGC Commander Hossein Salami said, “The enemy should remove false thoughts and ideas from their head.” Speaking on a TV program Aug. 4, he said Iran's response would be “destructive” and warned other countries to “not enter an arena of conflict with Iran.”

Salami added, “We warned them to learn from the past, we have confronted the enemy for 42 years and today we are stronger and more determined.”

On Aug. 3, there were conflicting reports of six ships in the Gulf of Oman having said they were "not under command," which generally means a ship cannot maneuver as a result of exceptional circumstances. One ship, the bitumen tanker Asphalt Princess, was reportedly overrun by Iranian gunmen, according to US sources, although this ship was let go Aug. 4.

On the domestic front, Iran continues to struggle with the coronavirus. The fifth wave of the virus has been a deadly one for Iran. In the previous 24 hours over 400 people died. The total number of deaths has exceeded 92,000 — though the actual figure could be twice as high.

President Ebrahim Raisi, who was confirmed as president by Supreme Leader Ayatollah Ali Khamenei on Aug. 3, will have his hands full bringing COVID-19 under control in Iran. Raisi met with the anti-coronavirus task force for the first time Aug. 4. The outgoing health minister had asked for a military lockdown for two weeks to help stop the spread of the virus. In his last meeting with the task force, President Hassan Rouhani apparently delayed making a decision on the matter, leaving it for Raisi.

Raisi's confirmation by Khamenei on Aug. 3 also was attended by other top Iranian officials. Raisi will be sworn in before the Iranian parliament, foreign dignitaries and other officials Aug. 5.

Raisi will have many foreign policy challenges ahead of him, the most important being the nuclear talks taking place in Vienna. The United States and Iran are at a standstill. Iran wants guarantees that the United States will not exit the deal again as it did under President Donald Trump. And the United States wants to add additional language to the deal that Iran would address regional and missile issues in the future. However, President Joe Biden cannot guarantee that the next president will not walk away from the deal. Iran also has previously said that missiles are non-negotiable.