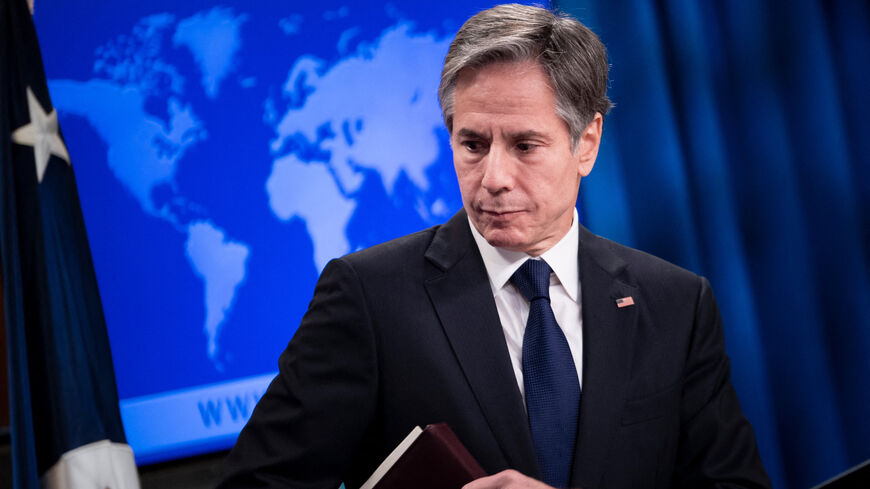 US Secretary of State Antony Blinken leaves after speaking during a briefing at the State Department on Aug. 2, 2021, in Washington, DC. - BRENDAN SMIALOWSKI/AFP via Getty Images

In a statement announcing the designations, Secretary of State Antony Blinken accused the IRGC’s elite overseas branch, known as the Quds Force, of funding its activities with revenue from Iranian oil sales.

“The United States will continue to expose and disrupt those supporting such efforts,” said Blinken, adding that the oil sales rely on foreign intermediaries to obscure the Quds Force’s involvement.

To conceal Iranian involvement and evade sanctions, Al Habsi "tampered with the automated identification systems that are on board vessels, forged shipping documents, and paid bribes," the department said. Al Habsi’s companies, one registered in Liberia, one in Romania and two in Oman, were also designated for allegedly helping facilitate the oil deals.

Al Habsi and his network are being sanctioned under Executive Order 13224, which authorizes the administration to block the US assets of those who commit or pose a significant risk of committing acts of terrorism.

Why it matters: The sanctions come as indirect talks between Tehran and Washington in Vienna, the last of which wrapped on June 20, remained deadlocked.

The two sides have been unable to agree on which kinds of sanctions the United States will remove in exchange for Iran’s return to compliance under the the tattered nuclear deal. Iranian negotiators are said to be demanding the lifting of terrorism-related and other non-nuclear sanctions, including designations of the IRGC and Iran's supreme leader. In another potential roadblock, Tehran now says it needs a guarantee enshrined in the deal that ensures future US administrations won’t unilaterally abandon the accord.

Further complicating prospects for diplomacy are a spate of maritime incidents blamed on Iran, including a deadly drone strike on an oil tanker off the coast of Oman late last month. The United States and its partners have vowed a collective response to the attack on Mercer Street that killed two Romanian and British crew members.

What’s next: The sixth round of nuclear talks wrapped in June and Iran’s new hard-line government hasn’t said when its negotiators will return to Vienna. But in a sign that new President Ebrahim Raisi is open to resuming negotiations, he told the audience at his swearing-in ceremony last week that Iran will "support any diplomatic plan" to lift sanctions.

Blinken, meanwhile, has warned the talks “cannot go on indefinitely” as Tehran’s nuclear program continues to advance in violation of the multilateral accord. US officials say Iran has amassed enough fissile material to build a nuclear bomb in just two to three months.

Know more: The Week In Review breaks down the foreign policy takeaway from Raisi’s inauguration speech and get up to speed on Hossein Amir-Abdollahian, the conservative diplomat replacing Javad Zarif as Iran’s foreign minister.