Since the Houthi seizure of Sanaa in 2014, the group has brought new sectarian pressure to Yemen's north, forcing both Shiites and Sunnis to observe Shiite customs. 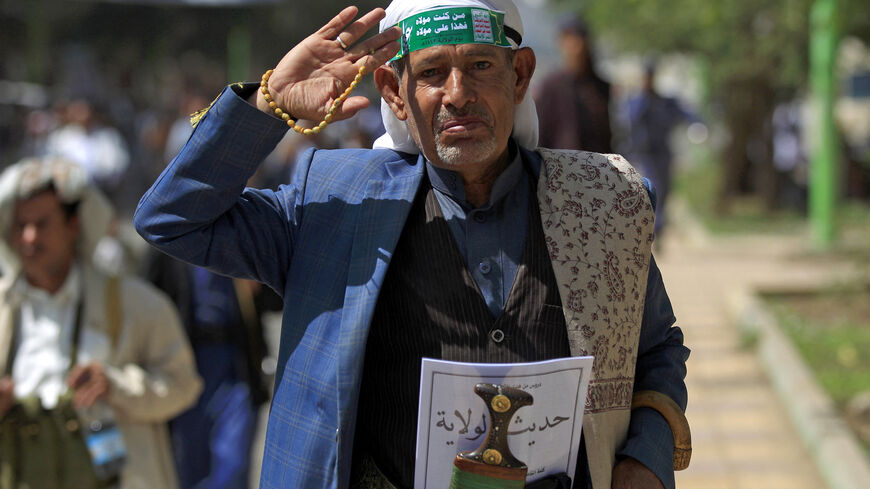 A supporter of Yemen's Shiite Houthi rebels gestures during a gathering to commemorate Eid al-Ghadir in the Houthi-held capital Sanaa on July 28, 2021. - MOHAMMED HUWAIS/AFP via Getty Images

Five years ago, Ahmed Fuad had no idea about Eid Al-Ghadir, a religious festival celebrated by Shiite Muslims in some countries. Now Fuad is fully aware of this occasion and enthusiastically celebrates it. On July 28, he joined thousands of people in Sanaa who gathered in squares across the Houthi-controlled provinces. Fuad joined a gathering at the Sanaa University square to mark the occasion, feeling he was performing a holy religious duty.

The Iran-allied Houthi leadership designated 34 squares where people were told to gather to celebrate Eid Al-Ghadir.

The story of Eid Al-Ghadir, set in the time of the Prophet Muhammed, remains one of the most contentious issues in Islam.

Yemenis stopped celebrating Eid Al-Ghadir after the breakout of the 1962 revolution that toppled the Imamate rule. The revolution gave birth to a republican state, ending dynastic rule. However, since the Houthi seizure of Sanaa in 2014, Yemen's north has returned to the old confessional practices. The six-year war has not only dismantled the state but also created a climate of sectarianism.

According to Islamic texts, the prophet gathered listeners in Ghadir Khumm, located between Mecca and Medina of Saudi Arabia. He delivered a short sermon and said, "Anyone for whom I am his leader, Ali is his leader." Shiite and Sunni Muslims interpret this line differently and fight each other over it.

Shiites say the prophet gathered the people to designate Ali, the prophet's son-in-law, as his successor. For them, it means that rulers must come from the prophet's dynasty, to which the Houthis claim to belong. Sunnis reject the idea that the dynasty is the rightful government, saying that people should select their own leaders.

"I did not celebrate Eid Al-Ghadir before Ansar Allah's [the Houthis'] takeover of Sanaa," Fuad told Al-Monitor. "I had no idea about it. No newspapers, TV channels, universities or mosques promoted it. Now the situation has changed. It has become a revered occasion in many provinces in Yemen's north."

Fuad said firmly, "The prophet clearly instructed the people that the successor should be Ali bin Abi Talib, and that is what we should follow."

On the streets of Sanaa, the Houthis erected billboards and paintings promoting Ali as a great leader, the successor of the prophet and a member of the prophet's family.

Top Houthi leader Abdulmalik Al-Houthi appeared in a two-hour televised speech commemorating Eid Al-Ghadir. He said this occasion must be observed because it is an extension of the prophet's mandate. He stated that prophet Muhammed nominated Ali as his successor.

Al-Houthi added, "The principle of guardianship means a guarantee, an important guarantee” to keep the Muslim world in compliance with Islamic instructions.

Hussein Nasser, a resident of Sanaa, told Al-Monitor that he celebrated Eid Al-Ghadir and set off fireworks from the roof of his house. "This festival reminds us that our faith would be imperfect if we do not stay loyal to the prophet and his dynasty. I believe in the prophet's instructions and follow his dynasty," said Nasser.

He admitted that his family did not celebrate this occasion before the Houthis rose to power. "During the former regime, we used to celebrate only Eid Al-Adha and Eid Al-Fitr. But now we also have Eid Al-Ghadir, and we celebrate all of them."

Other civilians in Houthi-controlled areas have expressed sorrow for what is happening. Faisal Abdu, a 25-year-old university student, told Al-Monitor that he used to watch people on TV in Iraq or Iran celebrate Eid Al-Ghadir. "Today, I see this celebration in Sanaa. This makes me sad because sectarian disputes cause hatred, and hatred leads to violence. Peace will not prevail in nations that are so ideologically divided."

Abdu added, "The Houthi group is exaggerating the importance of this occasion because they want to convey one idea. They want to instill in the minds of people that the Houthi leadership descends from the prophet's family and the Yemeni people have to obey the Houthi leaders and follow their instructions."

Last week, the former minister of endowments and guidance in the internationally recognized government, Ahmed Atia, said in a televised interview that the Houthis exploited Eid Al-Ghadir to manipulate the people. According to Attia, "The prophet and the caliphates after him did not celebrate this occasion. It was celebrated for the first time in the fifth century of the Islamic calendar."

Atia opposes the idea of allegiance to the dynasty, saying, "The ruler should be selected by the people based on suitable approaches that befit the time and the place."

While political differences were the causes of Yemen's fall into chaos and conflict in 2015, the rising tide of sectarianism is now a grave concern.

A political analyst in Houthi-controlled Sanaa said Yemen's social fabric has disintegrated further than ever before. Asking not to be named for fear of reprisal, he told Al-Monitor, "The poison of a sectarian agenda will prolong the war in Yemen. Neither the United Nations nor regional powers can eliminate sectarianism in Yemen. Seven years of war have changed the hearts and minds of the people. Now the nature of conflict is no longer political. It is sectarian, and it is hard to stop such a conflict."

He added, "The conflicting sides in Yemen cannot reach a political settlement and no one side has achieved a military victory. With sectarianism gaining momentum in Yemen, the country will not see an end of the war or a political agreement anytime soon. The Shiite-Sunni conflict has been one of the world's most enduring, and now Yemen is a victim of such discord."