Hamas published an official statement in which it congratulated its victory and praised its performance. 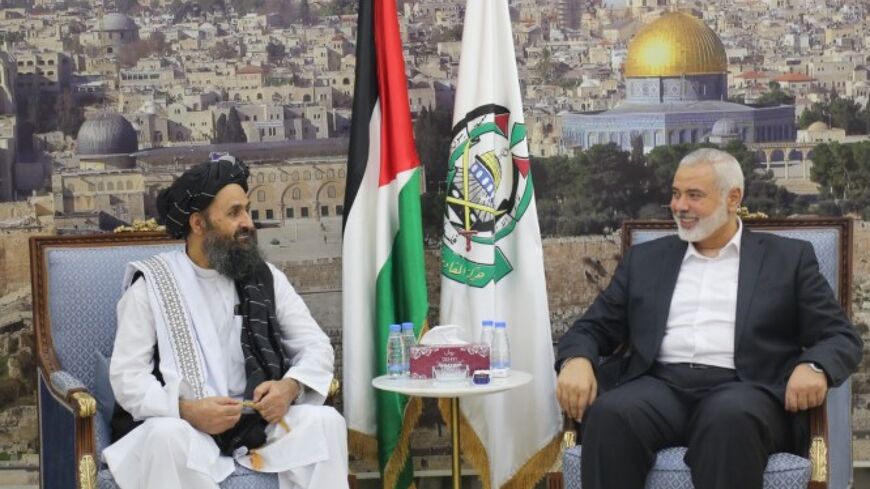 GAZA CITY, Gaza Strip — Hamas posted a statement on its website Aug. 16 congratulating the Afghan people for defeating the United States as well as the Taliban for a triumph the Palestinian group described as a culmination of a 20-year jihad.

Hamas said, “The end of the US and its allies' occupation is proof that the popular resistance, mainly our Palestinian militant people, will triumph and achieve the goals of freedom and return.”

Hamas’ political bureau member Mousa Abu Marzouk tweeted Aug. 15, “Taliban won today, after being accused of backwardness, retardation and terrorism. … It has become the smartest and most realistic movement today. It confronted the US and its collaborators, and refused any middle-solution with them.” He said that what happened in Afghanistan is a lesson that all oppressed people have undergone.

Hamas member Mahmoud Merdawi told Al-Monitor, “Hamas and the Taliban are Islamist movements resisting against the occupation, whether the Israelis in Palestine or the Americans in Afghanistan.”

He said the way the Taliban's victory was achieved delivers to all tyrants and occupiers the important message that the people’s will is capable of defeating any occupation. He said the Taliban’s victory sends a message of optimism to all people under occupation.

Merdawi said Hamas views the Taliban’s victory as a historic achievement from which the movement gets the strength and the optimism that Palestine will go through the same experience and that Israel will be defeated. He said the fact that Hamas published a photo featuring its leaders with those of the Taliban at this time shows that Hamas strongly supports vulnerable populations and affirms its unequivocal belief in the people’s right to decide their own destiny without any foreign interference.

He said, “Hamas supports the liberation movements and the people’s will, regardless of the party leading or representing them.”

He added, “There is no doubt that we are looking forward to defeating Israel in Palestine, following the US defeat in Afghanistan.”

Ibrahim al-Madhoun, a political analyst close to Hamas, told Al-Monitor that the Taliban are role models for resisting and rejecting occupation. Both the Taliban and Hamas are Islamist resistance movements and pointed out that theTaliban were fighting against the United States, which supports and favors Israel.

He said, “Hamas is not hostile toward the US, but it opposes the US support and bias toward Israel.”

He said the Taliban’s victory is inspiring to all people that resist the occupation and sparks optimism among the Palestinian resistance that it is possible to defeat Israel, at least in the West Bank now. He anticipated that anger will escalate there, as the Palestinian people grasp the lesson that continuing to resist the occupation will inevitably lead to victory, no matter how long it takes.

He pointed at the strong relations between Hamas and the Taliban, as Hamas’ political bureau head, Ismail Haniyeh, and his predecessor Khaled Meshaal had met with Taliban leaders. He said Hamas had respected the Taliban’s desire to keep their meetings confidential given the particularities of the political circumstances it was going through.

He noted that since the Taliban came out victorious, the reason for keeping the matter confidential was no longer valid.

He expected Afghanistan to witness real advancement in the coming period and to turn into a strong and emerging country, particularly since it has an excellent geographical location. He added, “Hamas is interested in enjoying broad and strong relations that would enable the resistance movement to achieve its goals.”

Tayseer Mohsin, a professor of political science at Al-Azhar University in Gaza, told Al-Monitor that Hamas’ reaction to the Taliban’s victory and the publication of photos featuring the two movements’ leaders could help promote the idea that were friendly relations between the Taliban and the Palestinian resistance, especially Hamas.

He said the Taliban and Hamas have both have common experiences involving Qatari mediation. Qatar sponsored the talks and agreement mechanism between the Taliban and United States and has played an important role in supporting Hamas and the Gaza Strip.