The Turkish government is eyeing a more independent — and riskier — role in Afghanistan after the Taliban’s blitz takeover of Kabul sidelined the United States earlier than expected. 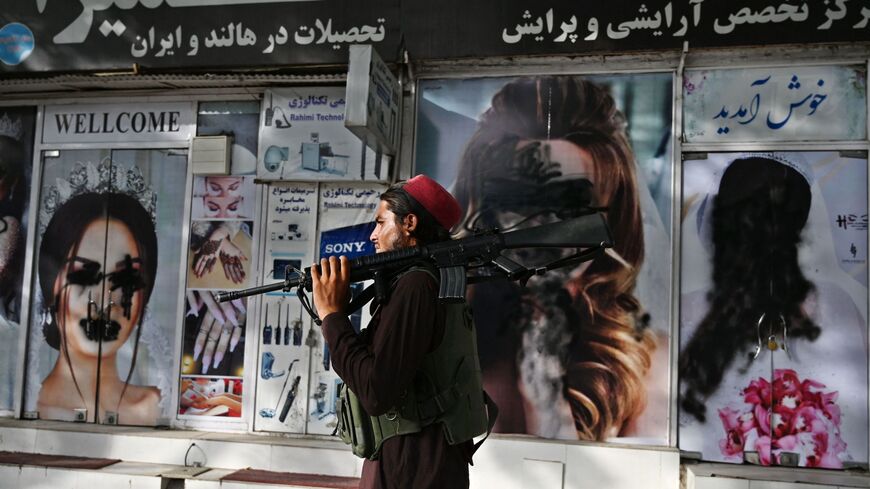 A Taliban fighter walks past a beauty salon bearing images of women defaced with spray paint in Shar-e-Naw in Kabul on Aug. 18, 2021. - WAKIL KOHSAR/AFP via Getty Images

Ankara was perhaps among those most taken aback by the Taliban’s whirlwind takeover of Kabul and the earlier-than-expected US departure from Afghanistan. Until last week, Ankara was preparing to attempt to mediate between the Taliban and the West and assume a mission to guard and run Kabul’s international airport once fellow NATO forces completed their withdrawal. After the head-spinning turn of events, it is now scrambling to adapt to the new realities on the ground.

The prevailing view in Ankara is that there is nothing left to negotiate with Washington now. Thus, efforts are underway for direct contacts with the Taliban.

“We maintain our dialogue with all parties [in Afghanistan], including the Taliban,” Foreign Minister Mevlut Cavusoglu said Aug. 17. “We view positively Taliban’s hitherto messages, both to foreigners and diplomatic missions and to its own people. We hope to see the same in their actions as well.” The minister signaled Turkey would wait for the dust to settle to decide its next step on the issue of the Kabul airport.

Turkey has been in charge of the military section of the airport as part of the US-led NATO mission and its soldiers have remained there so far amid the chaos of evacuation flights and Afghan crowds scrambling to flee the country.

Taliban spokesperson Suhail Shaheen told Turkey’s pro-government A Haber channel Aug. 16 that Afghanistan would have a new government “willing to have good relations with the world’s countries” and “committed to the basic rights of the people of Afghanistan.” The Taliban, he said, expects cooperation and assistance from Turkey, which he described as a “great Islamic brother country.”

In sum, both Ankara and the Taliban appear open to dialogue and negotiations. President Recep Tayyip Erdogan had already signaled last week he could consider meeting personally with Taliban leaders.

First, it has been seeking to advance the diplomatic contacts it has established with the Taliban’s political wing via Qatar.

Second, it has made efforts to also establish contacts with the Taliban’s military wing via Pakistan. Turkish Defense Minister Hulusi Akar paid a visit to Islamabad Aug. 10-11 for talks with high-level Pakistani army commanders. Senior military intelligence officials accompanied Akar on the trip.

Lastly, Ankara’s strategy to gain influence in Kabul involves doing whatever it takes to ensure that figures close to Turkey assume influential positions in the new government. Chief among them is former Afghan prime minister and Islamic Party leader Gulbuddin Hekmatyar, who has been at the forefront of efforts to talk the Taliban into forming an inclusive interim government. Erdogan’s ties with Hekmatyar date back to the 1980s, when the latter was a mujahedeen leader fighting the Soviet occupation. A memorable photo of the two shows a young Erdogan sitting at the feet of Hekmatyar.

Salahuddin Rabbani, a leader of the Jamaat-e Islami party who has served as Afghanistan’s foreign minister and ambassador to Turkey, is another figure close to Ankara. He was one of the architects of a plan for peace talks in Istanbul in April that the Taliban refused to attend at the last minute.

Erdogan’s government believes that the Taliban has come to value international legitimacy and will place special importance on relations with Turkey, the sole Muslim-majority member of NATO.

Some may wonder how Afghanistan has abruptly become a top issue on Turkey’s political agenda, where it barely figured until a few months ago. Why is Ankara eager for a high-profile role in Afghanistan despite the obvious risks?

This question cannot be answered solely from the perspective of Turkish foreign policy and Turkey’s diplomatic interests in Afghanistan or explained away with realpolitik alone. Turkey’s foreign relations have become a tool to help secure Erdogan’s political survival and international standing. Erdogan’s government, whose policies have badly damaged Turkey’s ties with the United States and Europe in recent years, appears eager to use the Afghanistan issue and claim a mediation role between global powers and the Taliban to prove itself valuable in Western eyes and boost its international legitimacy. Most importantly, it seems to hope that the Afghan card will strengthen its hand in negotiations on other issues with the United States and Europe.

Another driver in Ankara’s engagement is the geopolitical argument of bolstering Turkey’s say in Central Asia via Afghanistan, which is in line with the nationalist — and to some extent pan-Turkist — political discourse of Erdogan’s Justice and Development Party and its de facto coalition partner, the Nationalist Movement Party. Above all, this argument appears instrumental in convincing bureaucratic quarters that are worried over the ideological repercussions of engagement with the Taliban.

No doubt economic reasons also underlie Ankara’s efforts to raise its profile in Afghanistan, looking forward to big construction and infrastructure projects in the war-ravaged country.

Those calculations also include significant risks.

First, the Taliban’s military and political victory in Afghanistan could awaken and embolden extremist Salafi and jihadi networks in northern Syria, where significant territories remain under Turkish control.

Moreover, there are many Turkish nationals and others with links to Turkey among the extremists the Taliban released from Afghan prisons as it took over the country. How many of them will try to return to Turkey or head to northern Syria via Turkey? And despite the ideological and ethnic rifts between the Taliban and the extremist Salafi jihadis in northern Syria, the Taliban’s power grab raises the specter of a jihadi highway between Afghanistan, Syria and Iraq via Turkey.

An even bigger influx of Afghans fleeing the Taliban is another risk of Turkish engagement in Afghanistan. According to official figures, Turkey is currently home to about 116,000 irregular Afghan migrants, but the real figure is estimated at more than 500,000. Turkish media outlets and opposition politicians claim that up to 1,500 Afghans have crossed illegally to Turkey from Iran on a daily basis in the past several weeks. Due to increased security measures, the daily numbers are said to have recently dropped. Yet, Afghans who fail to make it across the border are not heading back home but waiting on the Iranian side for the right moment to sneak in, meaning that the number of Afghans on stand-by on the Iranian side is increasing by the day.

In sum, Ankara has a good deal of pros and cons to consider in its ambitions to engage with the Taliban. The government hopes to make use of the Afghan crisis to bolster its foreign credentials as well as to showcase an achievement at home, where its troubles have only grown in recent weeks over its response to devastating wildfires and floods that came atop economic turmoil aggravated by the COVID-19 pandemic. It faces an uphill task in managing the risks of such an engagement, which might eventually land it in deeper trouble at home and abroad.