A project to build a new axis aimed at easing traffic congestion in the Egyptian capital will divide the Maadi area in Cairo and result in several citizens’ evacuation from their shops and homes. 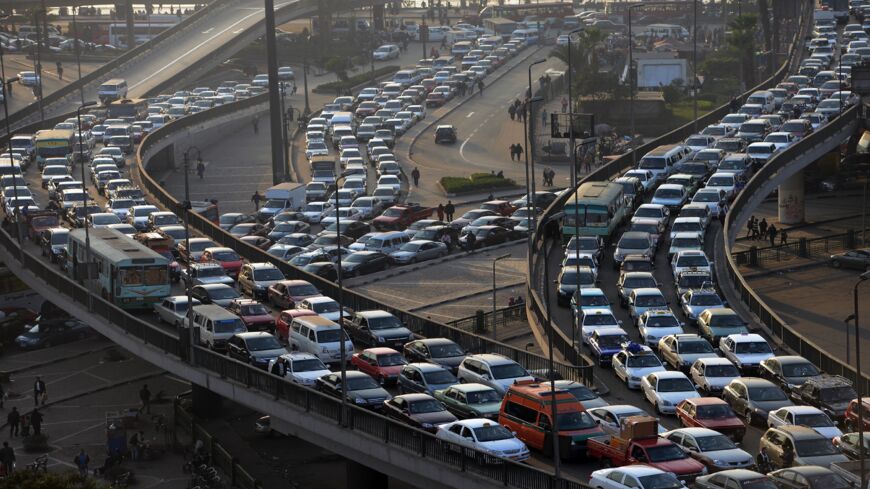 A general view shows a traffic jam in Cairo on Jan. 23, 2013. - KHALED DESOUKI/AFP via Getty Images

CAIRO — Ahmed Adel, owner of a flower nursery in the Maadi area in the south of Cairo, was surprised early to receive in July a notice from the government that he should leave the nursery and move his belongings to another location. The notice came as part of the Ministry of Transport’s decision to establish a new axis along the famous Street 250 in the Maadi neighborhood where there are hundreds of shops and flower nurseries.

Adel told Al-Monitor he contacted several owners and renters of shops on Street 250 to mobilize them to take legal action and stand together against the evictions. But "when they went to the governorate's general office to file a complaint, they were informed that the decision to establish the axis would not be reversed in any way,” he said

Regarding the expected financial compensation for those affected by the decision, another owner of a nursery on the same street told Al-Monitor on condition of anonymity they were informed there will be no compensation for their expulsion from their workplaces, especially since “this expulsion serves the public interest.”

On a Facebook group called “Maadi Refuses the Axis,” more than 12,000 residents and property and shop owners in Maadi expressed their opposition to the government project.

Meanwhile, authorities ignored the locals’ demands and asked the residents, owners and renters of shops to leave as soon as possible so that the excavation and construction process could begin.

On July 16, the Ministry of Transport issued a statement announcing it is moving forward with the construction of the new axis, saying it “will solve a major traffic crisis and link the Abbasiya area in east Cairo to Helwan and Tabbin districts, southeast of Cairo.”

However, the statement reflected a contradiction between what the Ministry of Transport stated and what the citizens were informed of. In the aforementioned statement, the ministry said, “The flower nurseries on Street 250 in Maadi will not be removed, and citizens will not be evicted.” But Sarah Ezzat, one of the nursery owners in the area, confirmed to Al-Monitor that she and all the nursery owners there were instructed to start procedures to leave the area immediately.

A human rights lawyer handling the residents’ right to housing file told Al-Monitor on condition of anonymity, “Maadi is an old residential area and has ancient heritage. It is subject to Law No. 119 of 2008 (on urban planning), which means it is prohibited to make any construction there without referring to the National Organization for Urban Harmony (affiliated with the Ministry of Culture).”

The lawyer said he is currently preparing a complete legal file to prove the ownership of property owners and agricultural nurseries in the area and their right to hold on to their property. The file will be submitted to the State Council to appeal the decision to establish the axis. He also pointed out that a number of residents have already proposed alternative routes to the axis away from residential areas, and all of this will be presented in the file before court.

Maha Abdel Nasser, a member of parliament from Maadi, told Al-Monitor over the phone she submitted a request for a briefing to the speaker of parliament regarding the construction of the new axis and the consequent removal of large residential and commercial areas.

“The path of the new axis cuts through the middle of a residential area with shops and old, natural trees. This would harm the aesthetic character of Maadi and affect the residents who have lived there for many years. We have to find alternative solutions that help the state develop and establish axes in its attempts to eliminate the traffic congestion crisis,” she said.

A source in the Ministry of Transport told Al-Monitor on condition of anonymity the new axis route is “still being studied and planned and is not definitive. It is possible to change the route based on the data of the studies on the ground.”

In response to a question about the residents’ and shop owners’ concerns and the evacuation requests, the source said, “I confirm that the axis’ route and track are not final, and it is possible to respond to the demands and change the route. It all depends on the technical studies carried out by the engineers in the current period. Everything will be announced soon.”