The Bedouin community in the Negev Desert region has been allocated far bigger budgets for development, health, education and transportation services. 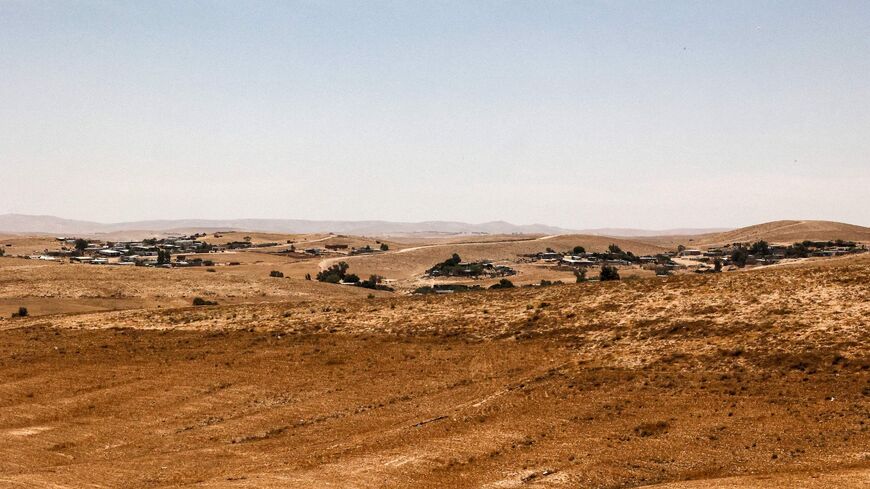 This picture taken on June 8, 2021, shows a view of houses in the unrecognized Bedouin village of Sawaneen in Israel's southern Negev Desert. - HAZEM BADER/AFP via Getty Images

The Bedouins of the Negev are considered to be the most impoverished community in the entire State of Israel, lagging far behind any other sector. The State Comptroller’s Report released Aug. 4, points to several failures by state institutions in dealing with the longstanding problems of the Bedouin community. It also notes that many of the issues compounding these problems can be attributed to the Bedouin sector itself.

Yet while the report is scathing, there is a glimmer of hope for the Bedouins. The five-year plan for the community, approved by the government Aug. 2 as part of the state budget, provides twice as much funding for the sector as it did in the past. The demand for greater investment in the Bedouin was initiated by the Arab Raam Party, which is part of the coalition. Much of Raam’s support comes from the Bedouin community.

Of course, a simple budget increase will not be enough to ensure that the situation of the Bedouin will improve. The report also notes that despite the planned investment of billions of shekels over the years, gaps between Bedouin settlements and their neighbors in the Negev continue to grow.

State Comptroller Matanyahu Engelman noted that basic municipal and regional infrastructure for Bedouin communities such as sanitation, water and electricity as well as sidewalks and roads, lags far behind. He also noted that blame does not lie with local and state authorities alone.

As an example, he points to the relatively new Bedouin settlement of Tirabin al-Sana, founded just 15 years ago. Local residents there vandalized and set fire to much the local infrastructure, including electrical poles and communications lines. Water and electricity are stolen so frequently that the Negev Bedouin Settlement and Development Authority says that theft alone accounts for 50-60% of water and electricity consumption in these towns and settlements.

Security is another chronic problem exposed by the report, which emphasizes measures to protect these communities from rockets fired from the Gaza Strip. The report found that many Bedouin communities in the Negev have no advance warning system whatsoever due to a lack of electrical infrastructure. Nor are there adequate protected public buildings that can be used as shelters. Here too, part of the problem can be attributed to the communities themselves. For example, some villages have refused to install alarm systems near mosques.

Polygamy is still prevalent in Bedouin society, even though it is forbidden by law and despite the harm it does to women and children. The report found that approximately one third of polygamous men have 10 or more children. In the years covered by the report (2018-2020), there were just 18 indictments for polygamy, out of a total 363 cases filed.

The report also noted that despite recommendations by the Ministry of the Environment, many schools in the Bedouin sector are located in close proximity to the Neot Hovav industrial complex, which produces toxic chemicals. Some 3,000 students attend school less than 2.5 kilometers (1.5 miles) from these factories. The state is working on these issues through the Negev Bedouin Settlement and Development Authority, but as the report notes, these efforts have been a total failure. For example, development has begun in only about a third of land designated for development and occupancy.

Another major gap exists between the population registration of Negev Bedouin in the central Population Registry and that of the Negev Bedouin Settlement and Development Authority. According to the comptroller, the Population Registry lacks the tools to determine in which municipalities the Bedouin population actually lives. The number of forged and falsified documents is staggering. “As of 2018, the number of Bedouins living in the seven local councils is 46,000 more than the number of Bedouins listed by the Bedouin Settlement Authority. This translates into a 15% difference. In other words, we do not even know the real size of this population.”

Small wonder, then, that the rates of crime and violence in this sector are especially high. According to the report, there were 1,628 reported cases of the three top crimes: theft of equipment, illegal entry into firing ranges and the construction of greenhouses to grow cannabis. From 2018 to 2020, 13 mobile facilities belonging to the electric company were stolen and water infrastructure saw 1,150 cases of vandalism from 2008 to 2018.

It should be no surprise that the Bedouin population of the Negev is the poorest sector in Israel. Government budgets over the years have done little to lift them from this precarious situation. At the conclusion of his report, the state comptroller wrote that it is incumbent upon the government to increase governability in the Negev in order to provide this sector — the younger generation in particular — with the tools needed to integrate into Israeli society and face the challenges of the future.

This is a major focus of Raam, which includes Bedouin Knesset member Said al-Harumi from Segev Shalom. The party received most of the Bedouin vote in the south, not least because of its promises to address the community’s problems. During coalition negotiations, one of its demands was to increase the amount of the five-year plan for the Bedouin sector from 3 billion to 5 billion shekels [$1-1.5 billion] and to invest hundreds of millions more shekels in transportation, communication and electrical infrastructure.

The new government acquiesced, as is evident from its new budget, which includes all of this additional funding for 2022. Another demand by Raam was that the administration of the five-year plan for the Bedouin population of the Negev be transferred to the Ministry for Social Equality, where it would be placed under the administration of Hassan Tuafra, head of the Arab Society Economic Development Authority.

Despite this progress, the underlying problems of Bedouin society make it difficult to come up with quick solutions. The clash between the traditional Bedouin lifestyle and the modern Western lifestyle of most Israelis remains a cause of constant friction.