The suspect, identified only as Mouafak AI D, is charged with the murder of seven people in the Palestinian refugee camp near Damascus. 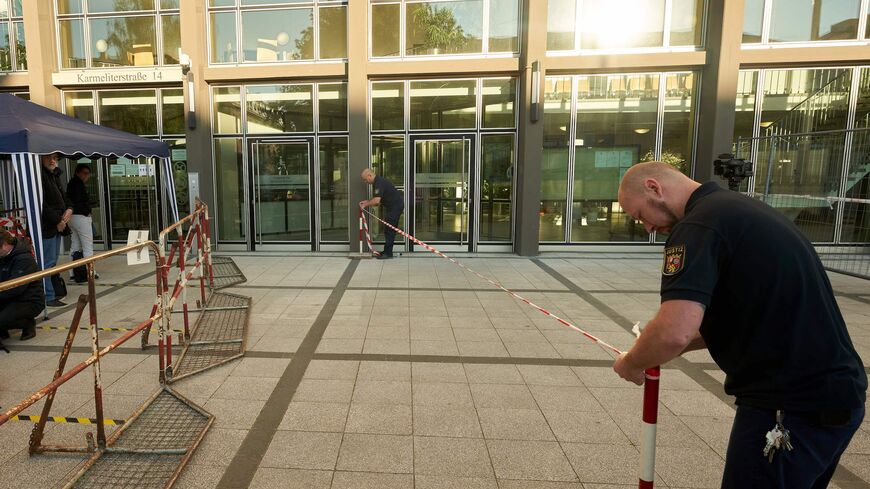 German prison officers prepare waiting lines amid the new coronavirus pandemic, outside the court building prior to the start of a trial against two Syrian defendants accused of state-sponsored torture in Syria, on April 23, 2020 in Koblenz, western Germany. - THOMAS FREY/AFP via Getty Images

Germany has detained a Syrian man in Berlin who allegedly fired a grenade into a crowd of civilians while fighting on behalf of the government near the capital in 2014.

The suspect, identified only as Mouafak AI D, has been charged with war crimes that led to the death of seven people, the federal prosecutor's office in Karlsruhe said.

Three others, including a six-year-old child, were injured when German prosecutors say the suspect launched a grenade into a crowd of Palestinian refugees who were lining up to receive UN-distributed food packages in Yarmouk on the outskirts of Damascus.

Before the civil war erupted in 2011, Yarmouk was home to Syria’s largest concentration of Palestinian refugees. Between 2013 and 2015, pro-government forces imposed a siege on Yarmouk, triggering a humanitarian crisis that killed nearly 200 people by March 2014. Most reportedly died of starvation and a lack of medical care.

According to the indictment, Mouafak AI D was a member of the Free Palestine Movement and before that a member of the Popular Movement for the Liberation of Palestine General Command. Both government-affiliated militias exercised control over Yarmouk.

Mouafak AI D will be brought before a judge who will decide on his possible pre-trial detention, German prosecutors said.

Germany is home to a large number of Syrian refugees and its courts have relied on the concept of universal jurisdiction, which allows for the prosecution of grave crimes committed in another country, to prosecute alleged perpetrators of torture and abuse in Syria.

Last week, a Syrian doctor who sought refuge in Germany was charged with crimes against humanity including torture and murder inside one of the regime’s notorious detention centers.

In February, a German court convicted Eyad al-Gharib, a former member of Syria’s security services, of crimes against humanity. Both France and Germany have issued arrest warrants for Jamil Hassan, the former head of Syria’s air force intelligence service.