Despite the stifling blockade on the Gaza Strip, a man from Gaza managed to manufacture a single-seat sand race car in his small shop using rudimentary tools and secondhand spare parts. 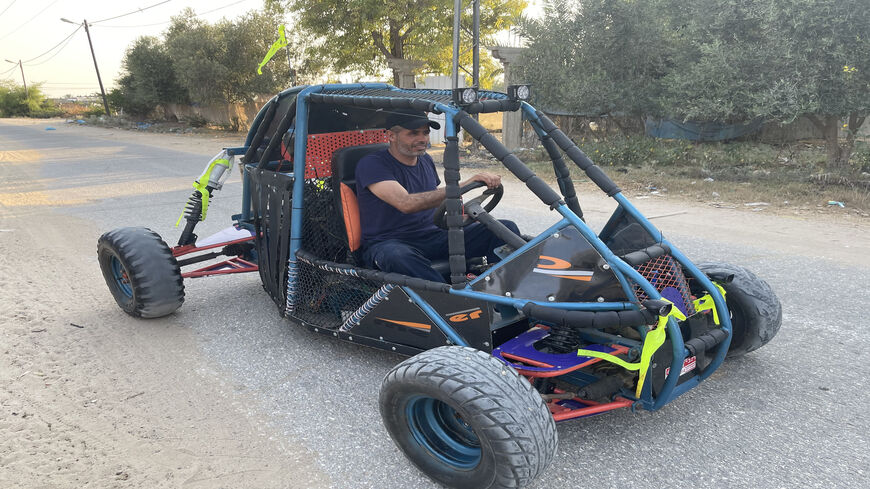 Fathi Salman Abu Gharaba attracts much attention in the Gaza Strip driving an oddly shaped sand race car that he built himself.

Abu Gharaba, 40, has had a passion for cars and international car races since his early childhood.

He designed his own single seater that can reach a top speed of 360 kilometers per hour (220 mph). It took him seven months to build the vehicle according to the Formula 1 international specifications. The car was ready in June.

Abu Gharaba created the “Desert Race” using scrap tools and rudimentary equipment, which he collected from different places in the Gaza Strip. He then assembled the vehicle in his small home workshop in the agricultural village of al-Masdar in central Gaza, located about 1,500 meters (1 mile) from the fence separating the coastal enclave from Israel.

In his small garage, tools are well arranged and displayed as if this is a professional workshop. A set of screws, batteries, wires and other outfits and kits surround another car that Abu Gharaba has been manufacturing over the past two years.

Abu Gharaba did not finish his university education. Instead, he has been working in the maintenance departments of large factories in Gaza since the 1990s. Before the Israeli siege in 2007, he participated in mechanics workshops organized by foreign companies that supplied and installed equipment in factories.

“Making cars has been my passion for years. The toughest part of this hobby is to search for auto parts, notably spare parts and generators, which is almost an impossible mission in Gaza amid the tightening Israeli blockade and restrictions,” he told Al-Monitor.

When Abu Gharaba finished designing his race car, he began looking for auto parts at scrapyards.

“I began searching for an engine for the car. It was an arduous journey amid the stifling blockade on Gaza. Eventually, I was able to find one that has specifications of a race car,” he said.

Abu Gharaba also had trouble finding the required wheels, as these are not allowed to be imported from outside Gaza. He settled for used tires.

“I had to use tires of sports motorcycles, which were the closest to what I was looking for,” he said.

Ismael al-Nakhalah, head of the Automobile Importers Association in Gaza, told Al-Monitor, “The Israeli authorities have been preventing the entry of new cars and spare parts into the Gaza Strip since the last round of escalation between the Israeli army and the Palestinian factions in May. The clashes that lasted for 11 days were the deadliest since the 2014 war."

Before he created “Desert Race,” Abu Gharaba had manufactured two agricultural vehicles. While the race car runs on gasoline, the other two vehicles are more economical and run on gas and are designed to help farmers spray crops on agricultural lands.

“The vehicles help farmers to save effort and money,” he said.

Although he did not manufacture the agricultural cars to sell, farmers in his area liked the idea and expressed interest in the vehicles that can run on agricultural lands. Abu Gharaba ended up selling the agricultural vehicles for the cost of the material he used without adding a profit margin.

“Desert race cars need wide sandy areas. Only professionals can drive them given their high speed. Many people asked me if my car was for sale, but I said no. It would be dangerous to give it to someone who is not an experienced race car driver,” Abu Gharaba said.

Among the other challenges he faced in building "Desert Race" were the long hours of power outages that made it difficult to work for hours at a time, in addition to running the grocery shop that he owns in al-Masdar, which is the main source of income for him and his family.

“I did everything with my bare hands, even bending the steel parts for the car body was manual work,” he noted.

Abu Gharaba said he hopes that one day he would be able to travel and work in a professional car workshop abroad.

“Many people contact me from abroad, especially from the Gulf. Some expressed their will to help me by sending me spare car parts, but this is impossible amid the blockade. But I will keep doing what I’m doing with the available equipment,” he concluded.