Palestinian auto mechanic Munir Shindi has finished his masterpiece: a replica of the 1927 Mercedes Gazelle built from scratch in his workshop in Gaza City. 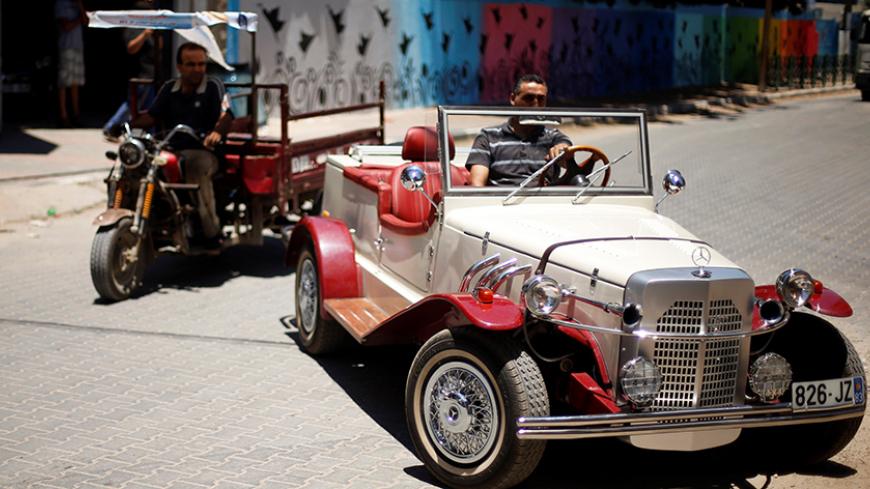 Palestinian Munir Shindi drives a replica of a 1927 Mercedes Gazelle that he built from scratch, on a street in Gaza City, June 19, 2016. - REUTERS/Mohammed Salem

GAZA CITY, Gaza Strip — The spirit of challenge and love of classic cars pushed Palestinian Munir Shindi, who lives in the neighborhood of al-Tuffah, east of Gaza City, to spend a year and a half in his small workshop manufacturing a replica of the 1927 Mercedes Gazelle.

Shindi, who now works as an auto mechanic in his own workshop, only completed middle school. He arrived in the Gaza Strip from the United Arab Emirates a year and seven months ago after spending 13 years there working in a mechanic shop in Abu Dhabi, where he became a specialist in repairing classic cars.

He told Al-Monitor, “I worked in the Texas workshop in Abu Dhabi between 2002 until early 2015. I was working in the field of classic auto repair, in a specialty workshop. I repaired numerous Mercedes-Gazelle cars while managing this shop. It is rare to find a mechanic specialized in repairing this car model, given the scarcity of its parts and accessories.”

As soon as he left his job in the UAE, he headed back to Gaza to reunite with his five children. His passion and love for classic cars and his dream of owning one pushed him to produce a replica. He faced a number of challenges, including the difficulty of importing parts.

He explained, “I decided to import some accessories from the United States so as to build an exact replica of the original model. Israel banned the entry of car parts into Gaza, and any parts I would import from the United States to Gaza would probably be confiscated. This is why I ordered the parts through a friend in the UAE and we had to resort to trickery to bring in these parts using Gazans arriving to the Gaza Strip to bring them in one by one. I waited more than six months to have all of the parts I needed to build my Gazelle.”

He said that he was not afraid of Israeli pursuit because he used the banned parts for peaceful purposes.

Shindi, who completed the car a month ago, pointed that it took him some time to figure out how to construct the car and build some parts and accessories true to the original from scratch. “Sometimes it took me about a month to plan, design and manufacture a specific part of the car,” he said.

Despite the modest income he earns from his small auto-repair shop, Shindi was determined to finish his masterpiece, which cost him more than $14,000. What he really wanted, he pointed out, was to manufacture an exact replica of the 1927 model.

The replica, however, contains several modern mechanical parts, such as its engine, a Mitsubishi 1600. Some new parts for the car’s interior were necessary to meet modern standards and meet driver expectations for speed.

Although Shindi has driven his dream car across al-Tufah since finishing it a month ago, he has yet to obtain an official license for the car due to complicated bureaucratic procedures.

He plans to manufacture another classic Mercedes model with full options for sale, but it will take a while to save up for it since his Gazelle replica has drained all of his savings.

Shindi hopes he will find sponsors like Gulf or European businessmen interested in classic cars who will finance his project to manufacture early models of classic cars.