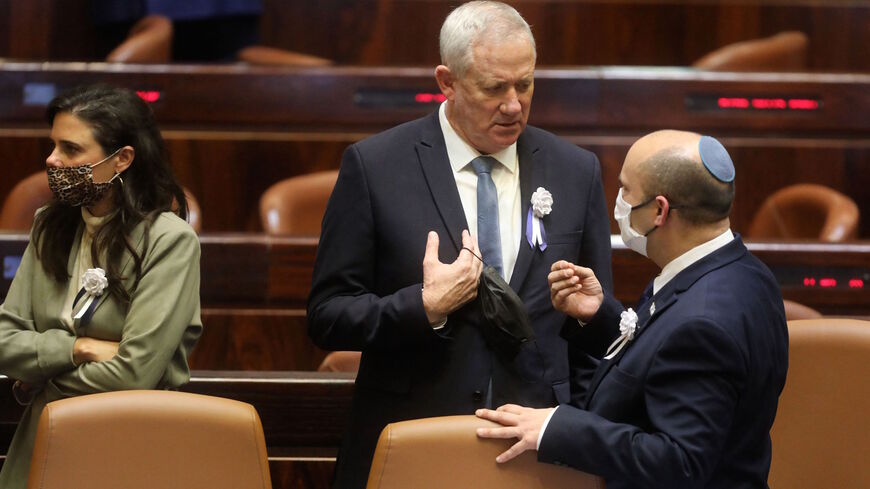 Israel's Defense Minister Benny Gantz (L) and Prime Minister Naftali Bennett speak with each other at a Knesset meeting in Jerusalem on July 7, 2021. - GIL COHEN-MAGEN/AFP via Getty Images

Foreign Minister Yair Lapid and Defense Minister Benny Gantz conducted a briefing on Iran for ambassadors of countries that are members of the UN Security Council on Aug. 4. Addressing the ambassadors, Gantz referred to the July 29 drone attack on the Israeli-managed oil tanker Mercer Street, claiming Israel knows the identity of the person specifically responsible for the assault.

"Saeed Ara Jani is the head of the IRGC’s UAV Command," Gantz said in reference to the Islamic Revolutionary Guard Corps' command for unmanned aerial vehicles. "The UAV command conducted the attack on Mercer Street. Saeed Ara Jani plans and provides the training and equipment needed to conduct terror attacks in the region. He is joined by commander of the IRGC’s air force, Amir Ali Hajizadeh, in spreading terror across the Middle East.’’

Gantz also said, ‘’I emphasized to my international friends that now is the time for deeds — words are not enough. It is time for diplomatic, economic and even military deeds — otherwise the attacks will continue.’’ At the same meeting, Gantz warned that Iran is a mere 10 weeks away from achieving nuclear-bomb-material.

On Aug. 5, Gantz said Israel is ready to strike Iran if necessary. Gantz called Iran a threat to Israel, to the Middle East and to the entire world, warning that Israel was prepared to take action to counter it. He told the news organization Ynet, "Iran seeks to pose a multifront challenge to Israel; as such it is building up its forces in Lebanon and Gaza, deploying militias in Syria and Iraq and maintaining its supporters in Yemen. Iran is a global and regional problem and an Israeli challenge. We need to continue to develop our abilities to cope with multiple fronts, for this is the future.’’ Gantz added that Israel is "in ongoing discussions with our US allies. We now see the international community reacting to the recent Iranian aggressions and the UN Security Council is set to take up the matter as well."

Pressed by a journalist as to whether Israel was ready to take military action against Iran, Gantz simply responded "Yes." Still, Gantz said Israel was focused on mobilizing the international community to curb alleged Iranian hostilities, “because we can’t tag Iran as solely an Israeli problem and absolve the rest of the world from this issue. The world needs to deal with Iran, the region needs to deal with Iran and Israel also needs to do its part in this situation,” said Gantz.

On Aug. 3, Israel’s envoy to the UN, Gilad Erdan, sent a letter to the Security Council, demanding it urgently address the Mercer Street incident and other past maritime incidents in the region.  “The Security Council should not sit idly by in the face of such violations by Iran or by the terrorist organizations throughout the region that serve as its proxies,” wrote Erdan.

These recent remarks by Gantz and by Lapid and the letter sent by Erdan reflect increased Israeli efforts to engage the international community against Iran. Israeli analysts said the July 29 incident off the coast of Oman presented the Bennett government with an opportunity to harness international support against Iranian involvement in global terrorism. The United States and the UK strongly slammed Iran for its involvement in the drone attack. Analysts said that contrary to the Israeli campaign against international negotiations on the Iranian nuke deal, the Israeli campaign against the maritime terror acts appears to be garnering some success.