A dispute between the son of the founder of the Patriotic Union of Kurdistan, the party's former leader, and his cousin might reduce the chances of victory in the upcoming parliamentary elections. 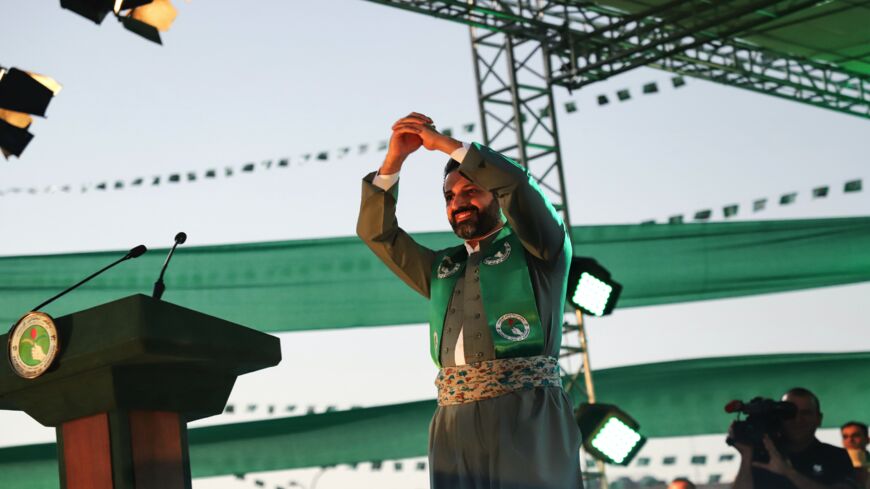 Qubad Talabani, deputy prime minister of the Kurdistan Regional Government and head of the electoral list of the Patriotic Union of Kurdistan, gestures before addressing supporters on the last day of campaigning for the Kurdistan regional election in the Iraqi Kurdish city of Sulaimaniyah, on Sept. 27, 2018. - SHWAN MOHAMMED/AFP via Getty Images

On Aug. 5, dozens of armed supporters of Patriotic Union of Kurdistan (PUK) Co-President Lahur Sheikh Jangi gathered around his house in Sulaimaniyah in Iraq's Kurdistan Region to defend him.

The supporters gathered after rumors circulated about an arrest warrant being issued with his name on it following accusations made by PUK Co-President Bafel Talabani, son of former Iraqi President Jalal Talabani.

Despite the fact that Bafel blocked Jangi from the presidency of the PUK, the official website of the party still refers to Bafel as the co-president. This means Jangi has so far kept his position while awaiting an internal reshuffling by the party.

Supporters of the party fear family disputes might result in divisions within the party and hope the blow they received in 2009 is not repeated. Founded in 1975, the party's former Deputy Secretary-General Nawshirwan Mustafa resigned in 2009 and founded the Gorran movement (Movement for Change).

Kurdish sources told Al-Monitor, "[Bafel] met on Aug. 5 with more than 500 sheikhs and figures from clans in Sulaimaniyah.  He told them that ties between him and [Jangi] have reached a dead end."

"The son of the former Iraqi president told the sheikhs that his cousin was spying on the party and trying to take it down. He has therefore taken these steps for the sake of the PUK," the sources said.

Sources said Jangi has great popular support and refuses to leave Iraq, as is being proposed by Bafel. He believes he is the successor of Jalal, the party's leader and founder.

In a few press releases published by the PUK on Aug. 5, Bafel stated, "The decisions issued are intended to benefit reform and the public good. Our dear residents of Sulaimaniyah and the Iraqi Kurdistan Region will be the first to benefit."

He added, "The changes will continue. We want to provide the right base for our people and greater services so that no one is above the law. Everyone should feel safe and stable. The protection of our national interests and our country is our duty. Our priority is to provide a good life for our citizens."

Iraqi media have reported that Shiite leaders are interfering to avoid any escalation in Sulaimaniyah, especially after supporters of Jangi gathered around his house. Meanwhile, Iraqi news websites point out that the source of the dispute is a Turkish plan to isolate Jangi because of his "support for the Kurdistan Workers Party (PKK)" — an organization active in the Kurdistan Region and classified as terrorists by Turkey.

Sulaimaniyah political writer Shaho Qaradaghi told Al-Monitor, "What is happening within the PUK has the veneer of reform, but it is in fact a way to consolidate power and influence."

He added, "The co-presidency of the party has failed. Media outlets close to Jangi have been insinuating an involvement in this matter of the Kurdistan Democratic Party (KDP) led by Massoud Barzani. This is because of Jangi's strong statements about the KDP."

Jangi is now keen on gaining some time in the hope of getting some local or international support that would help him keep his position as the PUK's co-president. He considers himself the carrier of the torch of his Uncle Jalal's school of thought.

Although the situation is escalating in Sulaimaniyah, a deadly conflict is still an exaggeration. The Talabani family has complete control over security forces, and Jangi has expressed no appetite for an armed conflict.

The PUK has accused Jangi of “corruption and abuse of power,” which is why he is asking specialized courts to interfere.

This conflict greatly affects the PUK, especially with the election date nearing and the presence of serious competition — namely the KDP, Gorran and the Generation Movement.

As for Barzani's family, which governs Erbil, they may be content to step back and let the PUK sort it out. They prefer to deal with their counterpart, the Talabani family. Sources told Al-Monitor "the leader of the KDP refused to meet with Jangi."

Erbil is pushing for strengthening Bafel's influence in Sulaimaniyah, giving him more legitimacy in running the PUK, and reducing the influence of his cousin Jangi, who believes dealing with one party is better than dealing with two.

Parties in the PUK are trying to mitigate the crisis — or at least they are giving that impression. PUK member Mohamad Khoshnaw stated on Aug. 4, "There is no crisis in the Union, but the media has been marketing it."

Jangi is currently resorting to the judiciary in order to resolve the co-presidency issue with his cousin Bafel. Yet such issues are politically triggered, involve local and international actors, and therefore cannot be resolved through the judiciary.

We can say this crisis has brought Jalal's two sons, Qubad and Bafel, back to the forefront. Qubad is currently deputy prime minister of the Kurdistan Region in Iraq under Masrour Barzani. They are back to center stage after years of Jangi occupying the scene in Sulaimaniyah.

In conclusion, the PUK is still controlled and managed by the Talabani family with the help of the old guard. It is unlikely, at least during the pre-election period, to witness any fragmentation that weakens it.