White House press secretary Jen Psaki said the United States is committed to "following all avenues and talking to anyone" who can help return Tice, a journalist and Marine veteran who disappeared in Syria nine years ago. 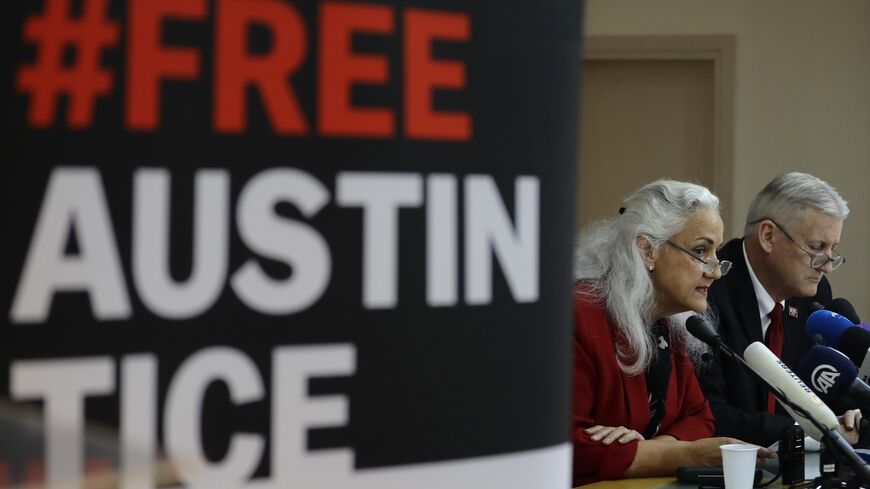 Marc and Debra Tice, the parents of US journalist Austin Tice, who was abducted in Syria in 2012, give a press conference in the Lebanese capital, Beirut, on Dec. 4, 2018. - JOSEPH EID/AFP via Getty Images

The Biden administration Wednesday called on Syria to help return Austin Tice, a freelance journalist who disappeared in the war-torn country nine years ago and is believed to be held by the regime.

"We believe that it is within Bashar al-Assad’s power to free Austin," Secretary of State Antony Blinken said in a statement marking Tice’s 40th birthday.

“Special Presidential Envoy for Hostage Affairs Roger Carstens and the broader team are working diligently and around the clock to bring Austin back to his family,” Blinken said. “Austin Tice must be allowed to return home to his loved ones who miss him dearly and to the country that awaits him eagerly.”

Tice, a former Marine captain from Texas who served in Afghanistan and Iraq, traveled to Syria the summer before his final year at the Georgetown University Law Center to cover the country's civil war as a freelance journalist for outlets that included McClatchy, CBS and The Washington Post. Tice disappeared after his taxi was stopped at a checkpoint in a Damascus suburb on Aug. 14, 2012.

Tice and psychotherapist Majd Kamalmaz are among a handful of US citizens believed to be in the custody of the regime or affiliated forces. Tice's parents, Debra and Marc Tice, have called on the Biden administration to directly engage with Damascus to secure their son’s release.

“We are now imploring a third President of the United States to communicate to his administration that Austin’s secure release and safe return is a priority,” they said in a statement.

“There are many capable people working in our government who are eager to see Austin walk free; they must have President Biden’s authorization for significant and relevant diplomatic engagement with the Syrian government,” the Tice family said.

Asked about Tice during Wednesday’s press briefing, White House Press Secretary Jen Psaki said Washington is "committed to following all avenues and talking to anyone" who can help return him.