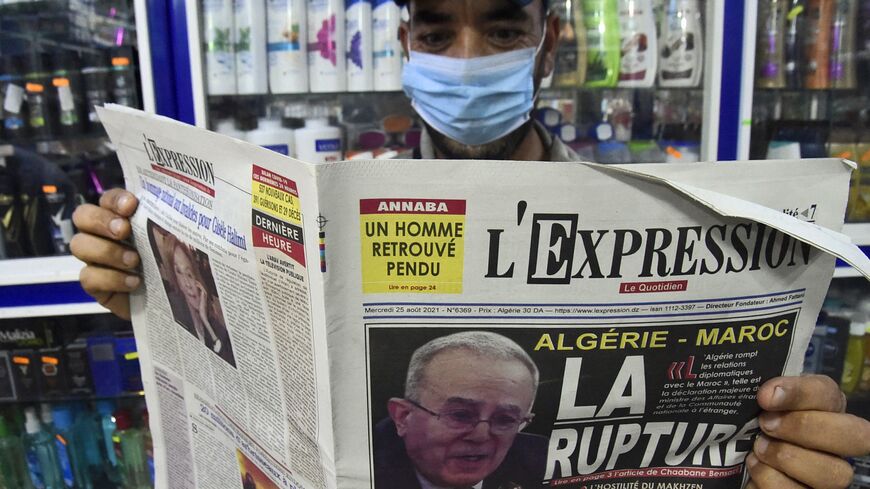 An Algerian man holds a newspaper in the capital, Algiers, on Aug. 25, 2021, a day after Foreign Minister Ramtane Lamamra (seen on the newspaper's front page) announced that Algeria has severed diplomatic relations with Morocco due to "hostile actions." - RYAD KRAMDI/AFP via Getty Images

Algeria's announcement this week that it was severing its diplomatic ties with Morocco came as no surprise — Algerian President Abdelmadjid Tebboune had issued a statement Aug. 18 saying relations with Morocco were being reviewed. Still, the depth of accusations Algeria leveled against Israel Aug. 24 did surprise Jerusalem. For the moment, the Israeli government has issued no comment, preferring to keep a low profile.

Algerian anger at Israel is not new, and is mainly related to the Israeli-Palestinian conflict. As such, it has intensified since Israel signed the Abraham Accords with Morocco, Bahrain and the United Arab Emirates. Soon after the agreements were announced, Tebboune said, “There is a mad rush among Arabs to normalize ties. We will not participate in it. We will not accept it. We will not bless it. The Palestine cause is sacred, and we will not give it up.”

But more than the Palestinian issue, the Algerian anger against the Israeli-Moroccan rapprochement was fueled by the American recognition of Moroccan sovereignty of Western Sahara. In fact, it was the Trump administration's agreement that the United States would recognize Moroccan sovereignty that opened the way for Rabat to join the Abraham Accords. Algeria has been supporting the Western Sahara independence movement Polisario for decades, and the new triple Israeli-American-Moroccan consensus on Western Sahara was perceived by Algeria as especially hostile.

Recently, Algeria accused Morocco of complicity in deadly forest fires where 90 people were killed. According to Algerian authorities, the fires were of criminal origin. Algeria blamed the August fires and a related lynching incident on the Kabyle independence movements MAK and Rachad, allegedly supported by the Moroccans. "The high security council has decided ... to intensify the efforts of the security services to arrest the rest of the individuals involved in the two crimes, as well as all members of the two terrorist movements that threaten public security and national unity," read the Aug. 18 statement. It further noted that Algerian authorities are aiming for the "total eradication" of the movements, "particularly the MAK, which receives the support and aid of foreign parties ... Morocco and the Zionist entity."

Algerian anger was further fueled by the Aug. 12 visit of Israeli Foreign Minister Yair Lapid to Morocco. During that visit, Lapid expressed concerns over signs of rapprochement between Algeria and Iran. Speaking at a press conference in Casablanca, Lapid said he shared with his Moroccan counterpart Nasser Bourita “some concern about the role of the Algerian state in the region, which has drawn closer to Iran and is currently campaigning against Israel’s admission to the African Union as an observer.’’

Algeria was furious over this statement, as clearly expressed in the Aug. 24 declaration by Foreign Minister Ramtane Lamamra. “Morocco has turned its territory into a platform allowing foreign powers to speak with hostility about Algeria. … Since 1948, no Israeli official made a hostile declaration to an Arab country from another Arab country,’’ said Lamamra.

The issue of Lapid’s statement, the Israeli-Palestinian conflict and the Western Sahara disagreement are not the only grievances Algeria holds against Israel. Lamamra also denounced “massive and systematic acts of espionage” by Morocco. He was referring to the Pegasus affair, where Morocco allegedly used the Israeli-made software to spy on Algerian officials. While Rabat categorically denied these allegations immediately after their publication, Algeria obviously was not convinced by this denial.