For the second time in 40 days, Mahmoud Abbas made an unusual visit to Amman on a Jordanian army helicopter. Is the visit only political or is there an attempt to get Jordan’s advice on the Palestinian succession issue? 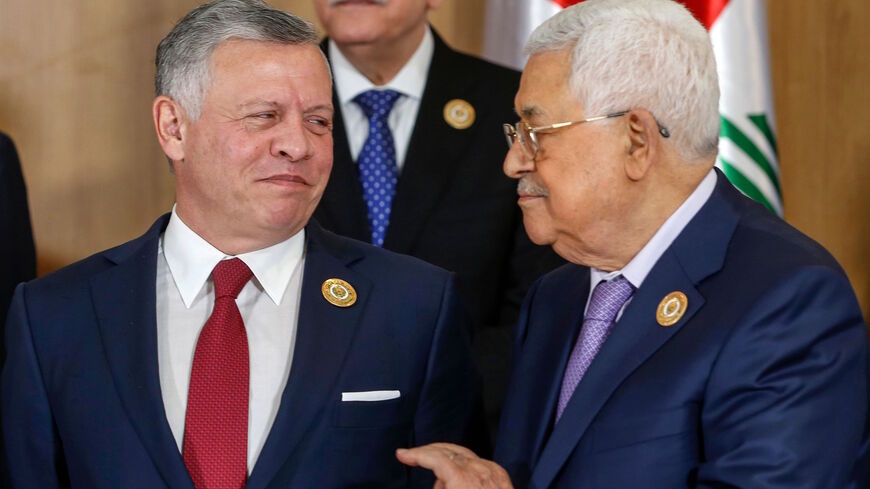 Jordan's King Abdullah II speaks with Palestinian president Mahmoud Abbas while standing for the group family photo with other Arab leaders during the 30th Arab League summit in the Tunisian capital Tunis on March 31, 2019. - ZOUBEIR SOUISSI/AFP via Getty Images

The drive from Ramallah to Amman takes many hours for ordinary Palestinians because of the Israeli border checkpoint on the King Hussein (Allenby) Bridge. But for President Mahmoud Abbas the trip is just a 90-minute drive with a short stop at the Israeli side that usually takes minutes because of Abbas’ VIP status.

However, during the last 40 days, Abbas and his top aides have made the trip twice by way of helicopter belonging to the Jordanian army. It is not clear why this method of transportation was used. Is it because of the coronavirus pandemic, the security situation due to the unhappiness by some Palestinians with their president or simply because of Abbas' health? Whatever the reason, the visits have increased speculation about both the health and longevity of the 86-year-old Palestinian president.

A senior Palestinian source who accompanied the president outlined the issues that the Palestinian and Jordanian leaders discussed during their latest meeting Aug. 14 at Al-Husseiniya Palace in Amman. “The king briefed President Abbas on his recent trip to Washington and the president briefed the king on the meetings with US and Israeli officials. They also talked about the upcoming UN General Assembly meeting and they coordinated positions for the New York event,” the source told Al-Monitor on condition of anonymity. The first visit also by helicopter took place June 30, just before the king departed for the United States.

There has been no talk about the succession issue despite the fact that there has been strong public discontentment from the actions of the Abbas government and public calls for his resignation.

Oraib Rantawi, director of Al Quds Center for Political Studies, told Al-Monitor that Abbas had committed to him and others in public that he would resign if 50 or more Palestinians call on him to step down. However, he has refused to do so despite demonstrations in Ramallah. He refuses in part to resign because in the absence of the Palestinian Legislative Council (PLC) there is no legal path for succession.

Abbas himself has refused to signal who he would like to see as his successor, although close aides continue to suggest that his chief intelligence director, Majed Faraj — who accompanied him on the recent visit to Amman — would be his choice. The problem is that Faraj has no popular support and is not even a member of the powerful Fatah Central Committee. Secretary of Fatah Jibril Rajoub was hoping he would be the speaker of the PLC had elections not been postponed. Palestinian Basic Law states that if the president is no longer in his position due to death or resignation, then the speaker of the PLC becomes president for 60 days leading up to new elections.

Rajoub was devastated by the cancellation of the elections, and while he was quiet for some time he has recently spoken out saying that the way elections were canceled was wrong.

The Palestinian succession issue notwithstanding, there is unanimity that there is little potential for a negotiated settlement with the Israelis. The Palestinian conflict is low on the priority list of Washington and the Bennet/Lapid government has no plans for a solution, which means that Palestinians need to think about how to deal with the long-term situation. This brings in Jordan, which has a modest economic relationship with Palestine despite its enormous clout over Israel. Since the tumultuous relations between the Jordanian palace and the Israeli premiership during the Netanyahu era have passed, Palestinians are hoping that this could be a time for improved economic relations.

For Palestinians, anything that reduces economic dependence on Israel is welcomed because it makes the eventual idea of an independent Palestinian state much more real. Jordanian exports to Palestine amounted to $165.79 million in 2020, according to the United Nations COMTRADE database on international trade. Palestinian exports that are mostly in the area of agriculture and building stones have been hampered due to restrictions imposed by Israel. An Israeli-Jordanian agriculture deal announced Aug. 17 allows for Jordan to export agriculture products in the coming year, which is a year that Jewish farmers are expected not to till the land as part of a religious commandment giving the land a rest.

The Palestinian leadership is hoping to build on the improved Israeli-Jordanian ties to begin the process of freeing themselves from near-total dependence on Israel, and therefore being relieved of the Israeli economic pressures that are used for political purposes.

While Egypt appears increasingly in charge of relations with Hamas and the Gaza Strip, the strengthening of Palestinian-Jordanian ties has become even more necessary now that Amman has much better ties with Tel Aviv.

As the slowdown due to the coronavirus pandemic starts to recede, and regardless of the Palestinian succession issue, Palestinian-Jordanian ties are set to deepen in the coming months, as there is little hope for any major breakthrough on the Palestinian-Israeli front.