Jordan is boosting its strategic ties with Israel based on their mutual economic interests, while Palestinians sound the alarm against normalization of relations with their enemy. 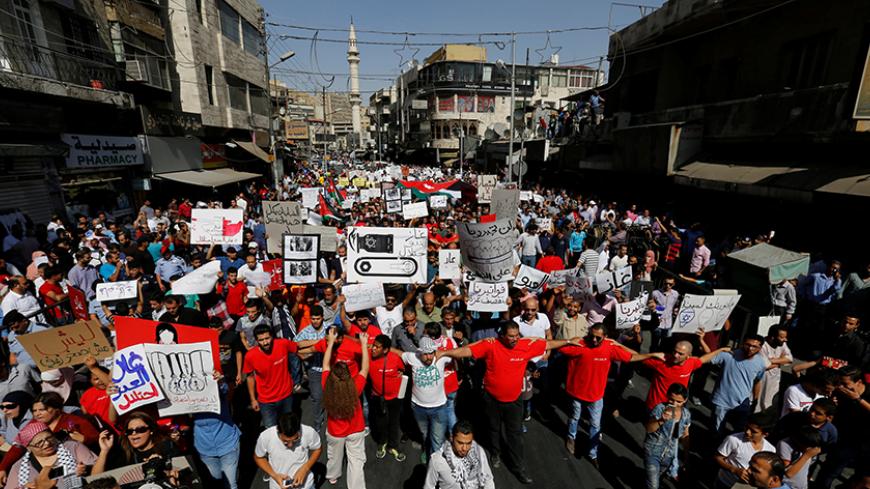 Jordanian protesters chant slogans during a protest against a government agreement to import natural gas from Israel, in Amman, Jordan, Oct. 14, 2016. - REUTERS/Muhammad Hamed

Some Palestinians fear they've been jilted by Jordan, which seems to be cozying up to Israel rather quickly. This courtship is clearly reflected in several recent events.

On Oct. 6, Israeli author Ephraim Herrera revealed in Israel Hayom newspaper that Jordan has requested security and political aid from Israel, which is showing its support for Jordan's King Abdullah II, suggesting relations between the two sides are at their best. This observation is supported by the activities of the week before, which was a virtual whirlwind love fest:

That's all in addition to an Aug. 23 request from Jordan for Israel's help in containing and cleaning up a crude oil leak from a pipeline off the Port of Aqaba.

It appears Palestinians are right to worry.

“Israel’s gas exportation to Jordan increases Israel's foreign exports and boosts its economic growth, turning it from an energy-importing country into an energy-exporting country," Khalil Namrouti, vice dean of commerce at the Islamic University in Gaza, told Al-Monitor. "This will further encourage it to extract gas off the coast of Gaza, which would be at the expense of the Palestinians.”

Maysara Malas, former deputy head of Jordan's Higher Executive Committee for Anti-Normalization with Israel, used the same phrase in stating how much the Palestinians stand to lose because of the rapprochement.

“Any improvement in Jordan's relations with Israel will be at the expense of the Palestinians," he told Al-Monitor. "The Jordanian government’s rapprochement with Israel is unacceptable and rejected by Jordanians since it harms Palestinian interests. It should be noted that Amman and Tel Aviv have an important strategic relationship. Jordan is [strengthening] its ties with Israel and will give absolute priority to this relationship.”

Despite Jordan's attempts to justify its gas agreement with Israel, a wide, popular protest swept through Jordan's streets, accusing the government of normalization with the Israelis. The agreement also stirred heated exchanges on social media.

Some Palestinian columnists highlighted the disadvantages of the agreement, most notably Osama al-Ashkar in a Sept. 27 piece published on Safa News Agency's website. Ashkar said the agreement is an accessory to the crime of killing Palestinians.

Dima Tahboub, a Jordanian parliament member for the Muslim Brotherhood, said the split between Jordan and Palestinians has been widening for some time.

“The Jordan and Israel rapprochement began with the Jordanian disengagement from the West Bank in 1988 and the Madrid Peace Conference in 1991," she told Al-Monitor. "Then, Jordanians and Palestinians started to separate their national, political and economic issues, and coordination between them was halted. The Jordanian government does not care about Palestinians’ anger toward Jordan’s rapprochement with Israel. The former Jordanian parliament issued in June an investment fund law granting Israeli investors the right to own land in Jordan.”

Jordan and Israel continue building their ties despite repeated announcements by Palestinian Authority (PA) President Mahmoud Abbas that he rejects any normalization of Arab-Israeli relations before the State of Palestine is established. Abbas reiterated this statement in his Sept. 22 speech at the United Nations, saying, “Israel insists on the establishment of relations with the Arab countries first, without ending its occupation of Palestine.”

Hamas also weighed in on the issue. Mousa Abu Marzouk, deputy head of Hamas' political bureau, told the Palestinian newspaper Al-Quds on Sept. 27 that by normalizing relations with Israel, Arab countries are making Israel stronger and abandoning the Palestinians.

Samira al-Halaiqa, a member of the Palestinian Legislative Council for Hamas, told Al-Monitor, “The gas agreement between Israel and Jordan jeopardizes the entire Palestinian national project, as [the deal] was concluded while Israel had been [committing] crimes and laying a tight siege on Gaza.”

She explained that the agreement is a form of public normalization with Israel by the Arab countries and leads the Palestinians to doubt they will have Arab support for a confrontation with Israel.

“This agreement hurts the Palestinian cause and reveals the Arab countries’ complicity to woo Israel and establish political and economic relations with it,” she added.

A former Palestinian minister who follows Palestinian-Jordanian relations also did not mince words.

“The Israeli-Jordanian rapprochements, in particular the natural gas agreement, are partially due to the economic greed and aspirations of Jordanian businessmen and officials who have influence on the political decision-makers" in Jordan, he told Al-Monitor on condition of anonymity. “Amman does not care about any angry reactions by the PA. Their relations are not that at their best. The last meeting between Abbas and King Abdullah, in June, was not very friendly.”

As Jordan gets closer to Israel, relations with Palestinians become tarnished with apathy, particularly between Abbas and Abdullah. This is due to several reasons, the most important being Jordan’s role in finding a prospective successor for Abbas, and the PA’s accusation that Jordan signed an agreement Oct. 1 with Israel to install surveillance cameras at the Temple Mount site — without consulting the PA. An earlier deal was canceled in April. Jordan administers the site and says camera installation is designed to prevent confrontations between Palestinians and Israelis.

Palestinians know that Jordan and Israel now maintain solid ties. The ties were secret before the 1994 Israel-Jordan peace treaty, also known as the Wadi Araba agreement, was signed. But the Palestinians cannot hide their disappointment in seeing their Jordanian brothers maintaining open relations with Israel on all political, economic and security levels, while Israel has been waging wars against Gaza since 2008.

Saleh Naami, a Palestinian expert on Israeli affairs, has consistently revealed aspects of cooperation between Jordan and Israel. He told Al-Monitor, “The rapprochement between Amman and Tel Aviv reflects their growing strategic relationship, in light of the large revenues that the Jordanian regime is allowing Israel to reap by sparing it from the need to exploit immense human and military resources to secure its borders with the kingdom.”

He added, “Jordan has become a buffer zone limiting attacks from the eastern front against Israel. Jordan and Israel have a close intelligence cooperation regarding jihadi organizations. Moreover, Jordan allows Israel to export its goods to the Arabian Gulf through its territory.”