The Palestinian president's meeting with the Israeli defense minister comes at a time of frustration among Palestinians with Abbas. 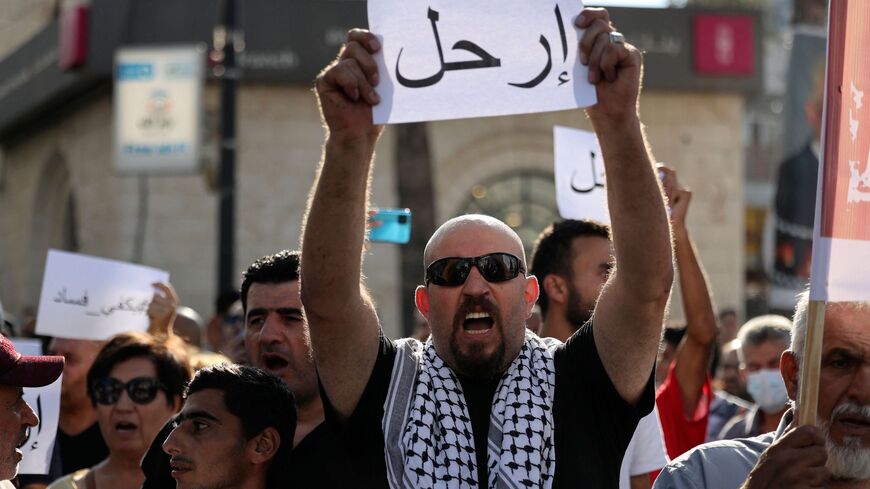 A Palestinian demonstrator lifts a placard in Arabic addressing Palestinian President Mahmoud Abbas that reads "Leave" during a rally in Ramallah in the occupied West Bank on July 11, 2021. - ABBAS MOMANI/AFP via Getty Images

Less than 24 hours after Israeli Prime Minister Naftali Bennett had returned from his meeting with US President Joe Biden, Israeli Defense Minister Benny Gantz met with Palestinian President Mahmoud Abbas. Where they met is unknown as no photos or videos have been released. The first news of the meeting was a tweet by the Palestinian minister of civil affairs and the lead liaison with the Israelis, Hussein Al Sheikh. At 17 minutes past midnight on Aug. 30, he tweeted, "President Mahmoud #Abbas met this evening in #Ramallah with Mr. Benny #Gantz, they have discussed the Palestinian-Israeli relations on all aspects."

Gantz shared the news in two tweets. At 12:30 a.m. he explained, ”This evening I met with PA Chairman Mahmoud Abbas to discuss security-policy, civilian and economic issues. I told Chairman Abbas that Israel seeks to take measures that will strengthen the PA’s economy," he wrote.

He then added, “We also discussed shaping the security and economic situations in the West Bank and in Gaza. We agreed to continue communicating further on the issues that were raised during the meeting.”

The official Palestinian news agency Wafa reported only the text of the tweet and nothing else. The Israeli press had little to add.

The meeting was supposed to take place before Bennett’s visit to Washington but the Israeli leader reportedly called it off. That it happened after the visit suggests to some that it was held to execute whatever undisclosed arrangements the American president and his Israeli ally reached.

A Palestinian source intimately involved in the deliberations of the Palestinian president told Al-Monitor that the meeting should be seen as part of Israel's obligations under the agreements it has signed. The source said that Palestine made no political payment in return for whatever concessions Israel may have made.

Some Palestinian commentators argue, however, that by celebrating some improvements of life under occupation, the Palestinians are complicit in perpetuating the status quo of a permanent occupation.

Diana Buttu, a former adviser to the Palestinian negotiating team, described the Israeli approach in a tweet: "The equation is always the same: occupied must give the occupier a safe space to carry out war crimes. In exchange we get bread."

Palestinian writer and analyst Kamel Hawwash told Al-Monitor his impression was that the meeting seemed to cover issues important to Israel but not steps to end the occupation. “By accepting the agenda and seeing this meeting as a positive step, the PA moves further away from the people, despite considering Israeli indications of economic improvement as positive.” Hawwash argued that Israel‘s prime minister is likely to be “responding to Biden’s indication that improving the economic situation for Palestinians is desirable, hence the timing.”

Nour Odeh, a political analyst and a founding member of the Palestinian National Democratic Assembly, found the meeting scandalous. Speaking to Al-Monitor, she expressed his shock at “a meeting at this level to discuss anything except politics," adding that Abbas "is conditioning dialogue with Hamas on their agreeing, in writing, to accept international resolutions," yet at the same time "is willing to meet with Gantz without any political foundation. There does not seem to be an end to this slippery slope.”

Regardless of the purpose of the meeting or its intended results, it is clear that the first visit in 20 years by an Israeli minister with the Palestinian president provides badly needed gravitas to a leader facing opposition from his own people, an unhappy European leadership and empty coffers. With little or no political options available, those around Abbas are arguing that it's time to get as much as possible from the Israelis and strengthen the home front while leaving the bigger issue of negotiating an end to the occupation for a later date. At a time of unprecedented support for the cause of Palestine around the world, even among American Jewry and the US public at large, this perspective seems very short-sighted. But for individuals who could gain badly needed family reunification or keep their business afloat, looking after their personal affairs is understandable at a time when neither Tel Aviv nor Washington is keen to play ball.