Iran's foreign minister faced scathing attacks from hard-liners in parliament after his upbeat assessment of the status of the nuclear talks. 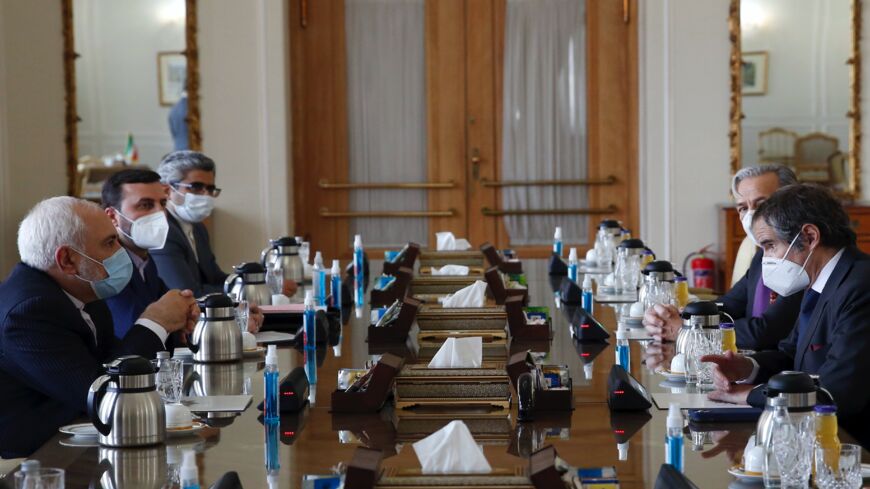 Iran's Foreign Minister Mohammad Javad Zarif submitted to parliament what was seen as his final report on the status of the talks over the revival of the Iran nuclear deal known as the Joint Comprehensive Plan of Action (JCPOA).

In the 213-page document, Zarif declared Iran was "only one step away" from getting the deal back on track.

Since February, six rounds of the JCPOA revival talks have been held between Iran and the other signatories, namely the UK, France, Germany, Russia and China. The United States, which withdrew from the deal under former President Donald Trump, has been involved indirectly after President Joe Biden sought to reenter the accord.

Relentlessly opposing engagement with the West, the majority of Iran's hard-liners have been in an open war against Zarif and his team since the deal was clinched in 2015. To them, the foreign minister's last report was a "justification" for a series of "failures."

The ultraconservative paper Kayhan — linked to the office of Supreme Leader Ayatollah Ali Khamenei — rejected Zarif's report as a series of "fabricated achievements" and some "distortion of history." It further accused the JCPOA architect of trying to "acquit" the American side and demanded a public apology.

Last in a series of 22 quarterly reports, Zarif's document finds a significant silver lining in the deal's prospects as he expresses hope that the new Iranian administration under hard-line President-elect Ebrahim Raisi will continue any remaining talks to reap the benefits and gain what best serves the interests of Iranians.

The daily Javan, affiliated with the Islamic Revolutionary Guard Corps (IRGC), selected from a section of the report, where Zarif regrets the "mirage" about Western companies flocking to invest in Iran in the post-JCPOA era. "The first-ever and belated confession," Javan described the statement.

Iran has repeatedly lamented what it finds to be the Western signatories' failure to provide the economic dividends it had been promised under the accord and has in response launched a phased breach of its own commitments since May 2019.

Zarif's report was not a purely technical, political document. The foreign minister could not help open up his heart on how he withstood eight years of "insults" and exercised "silence" in the face of allegations before he was set "to delegate" his responsibilities.

Expectations on a revived nuclear deal have been building in the closing months of President Hassan Rouhani's term. Yet multiple roadblocks seem to have put a brake on the progress, among them discussions on the contentious sanctions targeting Khamenei's office as well as the IRGC.

In his latest comment on the status of the JCPOA revival talks, Iranian Foreign Ministry spokesman Saeed Khatibzadeh remained ambiguous but noted the resolved issues "outweigh" the unresolved ones.

"What matters to the Iranian government is the interests of the Iranian nation, and the issue of timing is of secondary importance," he said, suggesting the fate of the JCPOA talks could lie with the incoming Raisi administration.