White House Press Secretary Jen Psaki said Monday that the administration will wait for the State Department to conduct a legal analysis before determining whether the situation in Tunisia constitutes a coup. 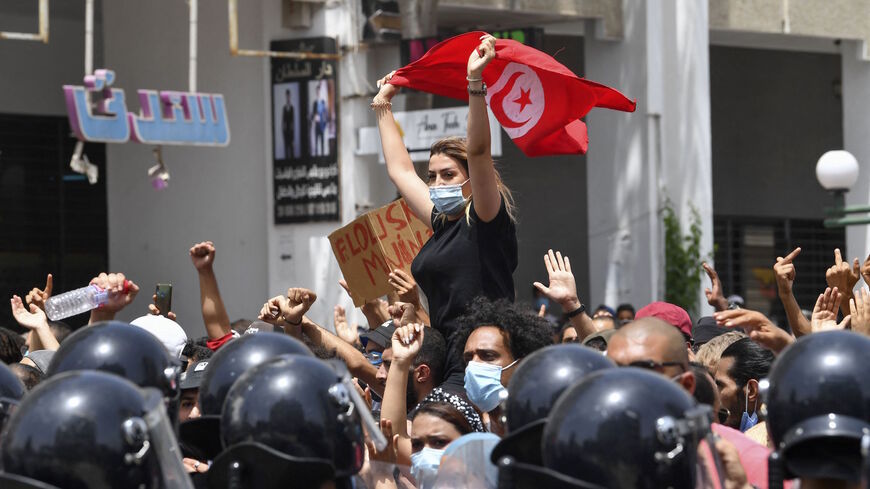 A Tunisian protester lifts a national flag at an anti-government rally as security forces block off the road in front of the parliament in the capital, Tunis, on July 25, 2021. - FETHI BELAID/AFP via Getty Images

The Biden administration is concerned by the political turmoil in Tunisia but has not determined whether a coup occurred in the North African country, White House press secretary Jen Psaki said Monday.

Amid violent nationwide protests, Tunisian President Kais Saied announced Sunday that he was dismissing Prime Minister Hichem Mechichi and suspending parliament for 30 days. Saied’s critics, including members of the moderate Islamist Ennahda party, said his actions amount to a coup and violated the young democracy’s constitution.

"We're concerned about the developments in Tunisia," Psaki said in Monday’s briefing.

"We are in touch at a senior level from both the White House and the State Department with Tunisian leaders to learn more about the situation, urge calm and support Tunisian efforts to move forward in line with democratic principles," she added.

Asked whether the situation in Tunisia constituted a coup, Psaki said the White House will wait until the State Department conducts a legal analysis before making a determination.

The State Department is staffed by many former Obama officials who also wrestled with whether to label the Egyptian military’s ouster of President Mohammed Morsi a coup in 2013. The Democratic administration ultimately chose not to issue a determination, in part because doing so would have implications for the more than $1 billion Cairo receives annually from Washington.

The Arab League urged the country “to quickly get through the current turbulent phase, restore stability and calm and the state’s ability to work effectively to respond to the aspirations and requirements of the people.”