The deadly attack took place in the autonomous Kurdistan Region near the Turkish border, and followed the deaths of two Turkish soldiers in Syria over the weekend. 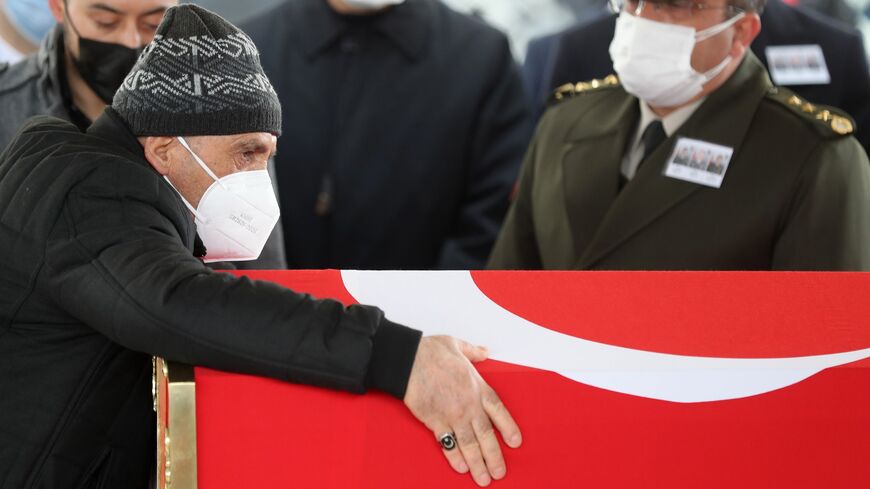 A Turkish soldier was killed in northern Iraq during an operation against the Kurdistan Workers Party on July 26, 2021. Here, a relative bids farewell to one of three Turkish military personnel killed in action during an operation against Kurds in northern Iraq, following funeral prayers at the Ahmet Hamdi Akseki Mosque in Ankara, Turkey, on Feb. 12, 2021. - ADEM ALTAN/AFP via Getty Images)

A Turkish soldier was killed fighting the Kurdistan Workers Party (PKK) in Iraq on Monday.

The soldier died when the PKK attacked Turkish forces doing a road patrol in the Hakurk area, Turkey’s official Anadolu Agency reported. Hakurk is near the Turkish border in the autonomous Kurdistan Region in northern Iraq.

Turkey’s Defense Ministry identified the soldier as Sgt. Halil Celebi, who was a member of the infantry, according to the statement.

The PKK fights for greater Kurdish rights in Turkey. It has long based itself on the mountainous border between the Kurdistan Region of Iraq and Turkey. Both Turkey and the United States consider the PKK a terrorist group, and Turkey regularly conducts operations against the group in northern Iraq and northeast Syria.

It is not uncommon for Turkey to report soldiers killed in action during these operations. On Saturday, Ankara said two soldiers were killed when their armored vehicle was ambushed in northern Syria. Turkey attributed the attack to the PKK and its ideological ally in Syria, the People’s Protection Units (YPG). The United States supports the YPG in its fight against the Islamic State, and this is a major reason for worsening US-Turkish relations.

Turkey also regularly claims to have killed or captured PKK fighters, and civilians in the Kurdistan Region have likewise been killed by Turkish airstrikes.

Turkey’s operations against the PKK are a controversial issue in the Kurdistan Region of Iraq. The violence has long divided the two main Kurdish parties in the region, with tensions being particularly high this year.