The draft resolution also called for Egypt, Ethiopia and Sudan to finalize an agreement on the Grand Ethiopian Renaissance Dam within the next six months. 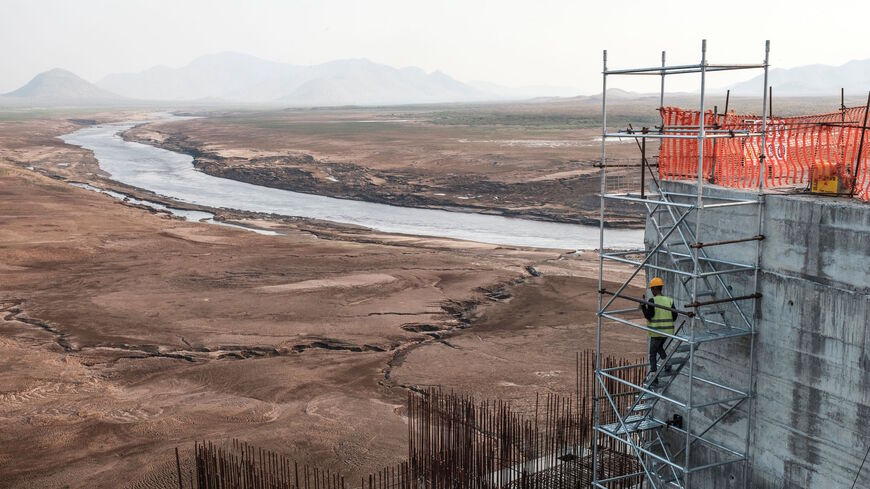 A worker goes down a construction ladder at the Grand Ethiopian Renaissance Dam (GERD), near Guba in Ethiopia, on Dec. 26, 2019. - EDUARDO SOTERAS/AFP via Getty Images

Ahead of a UN Security Council meeting on Thursday, Tunisia has reportedly submitted a draft resolution calling for Ethiopia to halt its filling of a controversial mega dam known as the Grand Ethiopian Renaissance Dam.

The document urges Egypt, Ethiopia and Sudan to continue negotiations over the GERD and finalize a binding agreement on filling the hydropower dam within six months.

The text calls on the "three countries to refrain from making any statements, or taking any action that may jeopardize the negotiation process, and urges Ethiopia to refrain from continuing to unilaterally fill the GERD reservoir."

Ethiopia argues the $4.6 billion dam is crucial to its economic development and would provide much-needed electricity in a country where half the population lives without power.

In what Egypt’s Foreign Ministry called “a dangerous escalation,” both Cairo and Khartoum said they had been notified by Ethiopia this week that the second phase of filling the GERD’s reservoir had begun.

Egypt and Sudan worry the ambitious project could dangerously restrict their freshwater supplies. The Blue Nile is a tributary of the Nile River, on which Ethiopia’s downstream neighbors are heavily dependent for their irrigation and drinking water. Addis Ababa maintains that the 475-foot-high dam will not impact the North African nations’ already scarce freshwater access.

The Tunisian draft text says a final agreement struck by the three countries should “ensure Ethiopia’s ability to generate hydropower from the GERD while preventing the inflicting of significant harm on the water security of downstream states.”

According to Agence France-Presse, a vote hasn’t been scheduled on a resolution and it’s unlikely the 15-member body will vote on the matter during Thursday’s meeting.

US State Department spokesperson Ned Price declined to confirm whether the GERD came up in Secretary of State Antony Blinken’s call with Ethiopian Prime Minister Abiy Ahmed on Tuesday but told reporters that the United States continues to encourage the three countries involved to resume a constructive dialogue.