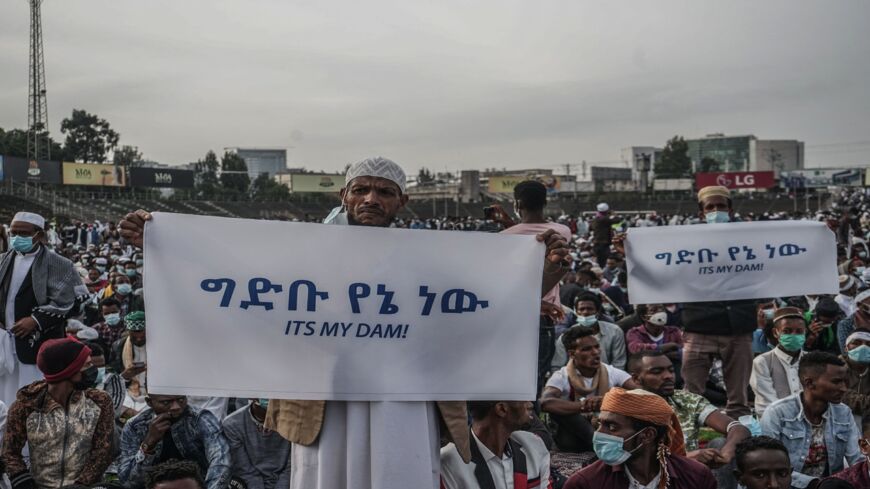 People hold placards to express their support for Ethiopia's megadam on the Blue Nile River as the faithful gather to attend the Eid al-Fitr morning prayer sermon at a soccer stadium in Addis Ababa, Ethiopia, on May 13, 2021. - AMANUEL SILESHI/AFP via Getty Images

On July 6, Saudi Arabia announced its support for the water rights of both Egypt and Sudan and backed a solution to the Grand Ethiopian Renaissance Dam (GERD) dispute, which has engaged both the Arab League and the African Union. This statement, which came just one day after Ethiopia began its second filling of the dam’s reservoir, added to the atmosphere of rising tension between Saudi Arabia and Ethiopia. In June, 40,000 Ethiopian migrants returned home from Saudi Arabia in a two-week period, as they were forced to contend with a “hostile Saudi policy” toward Ethiopian guest workers.

Saudi Arabia’s willingness to undermine its relationship with Ethiopia by openly supporting Egypt and Sudan in the GERD dispute can be explained by two factors. First, this position aligns with Saudi Arabia’s broader principle of Arab solidarity during regional security crises. Abdalla Mosa Altayer, the chairperson of the London-based Gulf Futures Center, told Al-Monitor Saudi Arabia’s Arab League membership forces it to align with other Arab states. This explains Saudi Arabia’s support for Egypt during the Doha meetings on the GERD and Arab League efforts to adjudicate the dam dispute in the UN Security Council. Altayer also noted Saudi public opinion strongly favors an alignment with Egypt in the GERD dispute.

Second, Saudi Arabia’s more assertive role in the GERD dispute will bolster its status as a security guarantor in the Red Sea. Although Saudi Arabia became the leader of a Red Sea security coalition in January 2020, it has played a minimal role in preventing an Egypt-Ethiopia conflict, which would destabilize the entire region. Saudi Arabia’s inaction is conspicuous, as the United Arab Emirates (UAE) has leveraged its even-keeled approach to mediate between Egypt, Sudan and Ethiopia, and Qatar recently hosted an Arab League meeting on the GERD dispute. Through its recent statements, Saudi Arabia can upstage Qatar as the leading supporter of Arab solidarity in the GERD dispute and demonstrate that it is no longer delegating Red Sea security to the UAE.

Ethiopia strongly opposes Saudi Arabia’s efforts to engage the Arab League in the Nile dam crisis, as it believes the GERD dispute is a technical issue that should not be internationalized. On July 5, Ethiopian Foreign Minister Demeke Mekonnen wrote a letter to the UN Security Council, which condemned the Arab League’s involvement and emphasized the potential efficacy of the African Union’s hosting of tripartite negotiations. The Ethiopian Foreign Ministry also accused the Arab League of “unwelcome meddling” after it raised the GERD dispute at the UN Security Council. Ethiopian media outlets have accused the Arab League of racism by undermining the African Union’s influence over an African issue and spread the conspiracy that Pan-Arabists are seeking to control water sources in the Greater Middle East-North Africa region.

Notwithstanding the caustic rhetoric that has accompanied Saudi Arabia and Ethiopia’s divergence on the GERD dispute, long-term disruption of Saudi-Ethiopian relations is unlikely to occur. Ethiopian Prime Minister Abiy Ahmed’s first trip outside of Africa was to Saudi Arabia in May 2018, and the pace of Saudi investments in the manufacturing, tourism and energy sectors has accelerated since Ahmed took power.

The past conduct of Saudi Arabia and Ethiopia also points to restrained tensions between the two countries. Saudi Arabia has repeatedly aligned with Egypt but has never exerted coercive pressure on Ethiopia to suspend its fillings of the GERD. Teshome Borago, an Ethiopian journalist and a political analyst, told Al-Monitor Arab League statements on the GERD “are often drafted in Cairo with no multilateral input and hold no weight.” Borago notes Saudi Arabia-Ethiopia relations have strengthened after Riyadh backed Egypt on the GERD and supported this contention by citing Saudi Arabia’s recent provisions of millions of dollars to alleviate Ethiopia’s currency shortage. On a similar note, Idriss Ayat, a Kuwait-based specialist on Gulf-African relations, told Al-Monitor Saudi Arabia has not used its standing as the fourth largest exporter to Ethiopia and third largest investor in the Ethiopian economy to influence Ethiopia’s policy toward the GERD.

Ethiopia’s foreign policy decisions on regional crises also have a history of being more restrained than its rhetoric. Ethiopia’s handling of the al-Fashaga border dispute with Sudan could provide a window into how it might approach relations with Saudi Arabia. Dawit Yohannes, an expert at ISS Africa in Addis Ababa, told Al-Monitor that Ethiopia has carefully avoided opening a new military front against Sudan, despite Khartoum’s pro-Egypt position on the GERD and incursions on its borders. Yohannes predicted that Ethiopia would “choose its battles” and downplay Saudi Arabia’s partiality toward Egypt to preserve the relationship.

Moreover, the departure of Ethiopian guest workers from Saudi Arabia is unlikely to create lasting frictions in the bilateral relationship. Borago noted Saudi Arabia’s prior expulsion of 100,000 Ethiopian guest workers had no impact on the Riyadh-Addis Ababa relationship, and he concluded that Saudi Arabia expelled the workers to pander to nativist sentiments at home, while Ethiopia criticized Saudi Arabia for domestic consumption. As a result, Borago contends that “both sides view their long-term political, economic, historic and diplomatic relations as much more vital than the treatment of migrants.”

As the third anniversary of the Ethiopia-Eritrea peace agreement in Jeddah nears, Saudi-Ethiopian relations are facing their most difficult moment of Ahmed’s tenure. While disagreements over the GERD and the treatment of Ethiopian migrant workers will continue to fester, Saudi Arabia and Ethiopia are likely to compartmentalize their disagreements and maintain cooperation in the coming months.